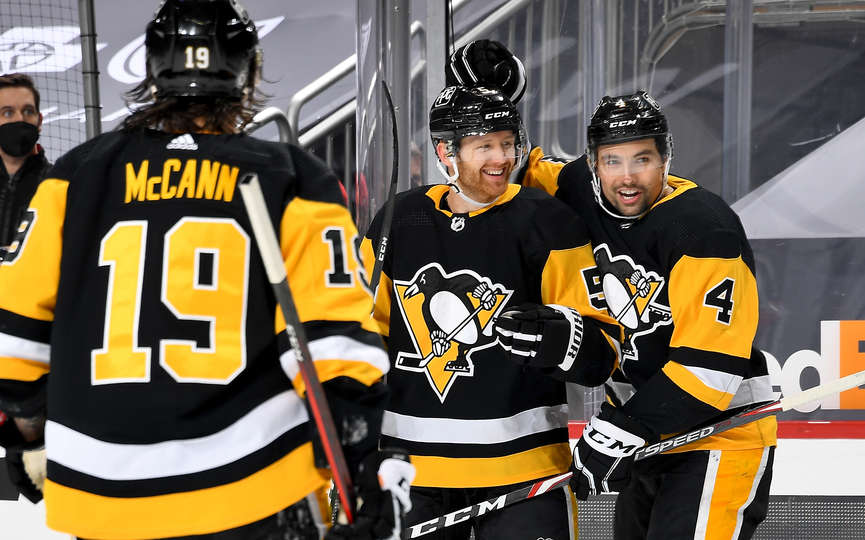 Prior to their Tuesday tilt with the Devils, the Penguins got some great news at morning skate as Evgeni Malkin and Kasperi Kapanen both took part in a non-contact capacity.

With a game in hand and just three points behind the East division-leading Capitals, the Penguins are looking like a threat to take control of the division.

It’s likely that Malkin and Kapanen will miss a few more games, but their returns will be soon enough to aid the Penguins in a push for the top spot in the East.

Tuesday’s matchup was the first of three this week between Pittsburgh and New Jersey, let’s get weird. 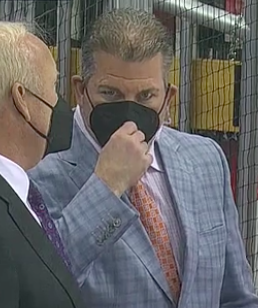 Mark Recchi setting the tone with a hideous suit and tie combo. Yeesh.

Lined up and ready for hockey. pic.twitter.com/qFxjE74pTo

Radim Zohorna comes out for Sam Lafferty, who has yet to score this season.

Mike Matheson opened the game’s scoring on a one-timer that resulted from a really nice cycle in the o-zone.

Matheson and Ceci have been racking up the points as of late, just like everyone predicted. They are both near a point per game pace over the past couple weeks.

In Rust we trust.@rustyyy_92 scores his 18th goal of the season. pic.twitter.com/ELWHfZIXbZ

The Penguins went up by two on a beautiful tally from Bryan Rust.

Awesome move by Rust in tight to bury it, but what an insane pass from Sidney Crosby to bank it off the boards to spring him loose.

Less than a minute later, Brian Dumoulin’s backhander from center ice managed to change direction on its way in and beat Wedgewood. Absolutely putrid goaltending.

The attempt had an expected goal value of 0.4%.

FIRST GOAL IN THE BLACK AND GOLD!

Jeff Carter rounded out the Penguins’ barrage of first period goals with his first tally in black and gold.

He jumped on a loose puck in the slot and rifled it past Wedgewood, who would be replaced by Aaron Dell for the start of the second period.

Rez is getting an absolute kick out of reminding me about my initial thoughts on the Carter trade, but it’s hard to be upset about anything with the way he’s played thus far. He is quickly becoming a favorite of mine.

Since returning to the lineup on April 11 after missing 13 games, Teddy Blueger has points in four of five games (2G-2A). pic.twitter.com/EE5YJSjMwF

Teddy Blueger added to the Pens’ lead off a beautiful dish from Evan Rodrigues.

E-Rod drew all the attention to himself before slipping a nifty backhander to the slot, where Blueger was wide open and buried the puck into the yawning cage.

The second power-play unit went to work and sent the Penguins’ lead to six thanks to some nice puck movement.

Rodrigues picks up the tally and he’s looking like an incredible depth piece for the Penguins. Now that he’s finally being deployed in a proper role, the Pens are reaping the benefits.

Since my take on the Carter trade was so off the mark, here’s a decent take I had on Rodrigues over the offseason before the Penguins signed him:

Ya know, I’ve been looking at all the upcoming UFAs to figure out who might be a good fit for the Penguins’ bottom six, and all I keep circling back to is that Evan Rodrigues would have been the perfect fit.

The Devils finally got on the board less than a minute into the game’s final frame as their captain Nico Hischier sent a one-timer past Jarry.

Not much the Penguins could do as they were down two men. Stay outta the damn box.

Sharangovich on the PK.

The Devils tallied again, this time shorthanded, when Kris Letang made a risky play at the point that was intercepted by Yegor Sharangovich and ultimately taken the other way for a goal.

Bit of a weird play for a goaltender, but Jarry has to come up with that save.

Three minutes later the Devils tallied again, this time on a sweet redirect out front from Nathan Bastian.

Part of me wants to let Jarry off the hook for this due to the redirect, but his failure to seal his post ultimately resulted in the goal.

Not the best period we’ve seen from him but the Pens are still in the driver’s seat.

Crosby lasered a snap shot to the top of the net to put the Pens back up by four.

It was in and out of the net so fast that play briefly continued before the refs noticed Crosby celebrating. If he’s celebrating, you know it was in.

That should do it for this one.

Or so I thought…

Kid line at it again.

The Devils refused to go away, as Jack Hughes ripped the puck past a sprawling Jarry to cut the lead to three.

The Penguins’ coverage had a bit of a breakdown here, but Jarry absolutely has to come up with this save. I’m not sure how he got so far off his angle.

Quite the lack of focus and attention to detail in the third.

Now this is just getting ridiculous.

The Devils came within two thanks to Nolan Foote’s first career goal.

It was actually an awesome passing play, but Jarry sold out for the shot from Nick Merkley and left himself extremely vulnerable to Foote, who received the pass and sent it to the back of the net.

This time, it was Andreas Johnsson on a weak attempt from below the goal line.

I’m no goaltending expert but this seems to be a complete lack of awareness in such a high leverage situation.

Luckily, time had all but run out on the Devils, and the Penguins slipped away with the victory.

The Devils had six high-danger chances in the third period, but that’s no excuse for Jarry unravelling.

Since they spent most of the game battling back, the Devils led in shot attempts (55-47) and scoring chances (30-25).

Evolving Hockey gives the Devils a 2.92-2.01 expected goals advantage. Somehow, the Devils got worse goaltending than what the Penguins got from Jarry in the third period.