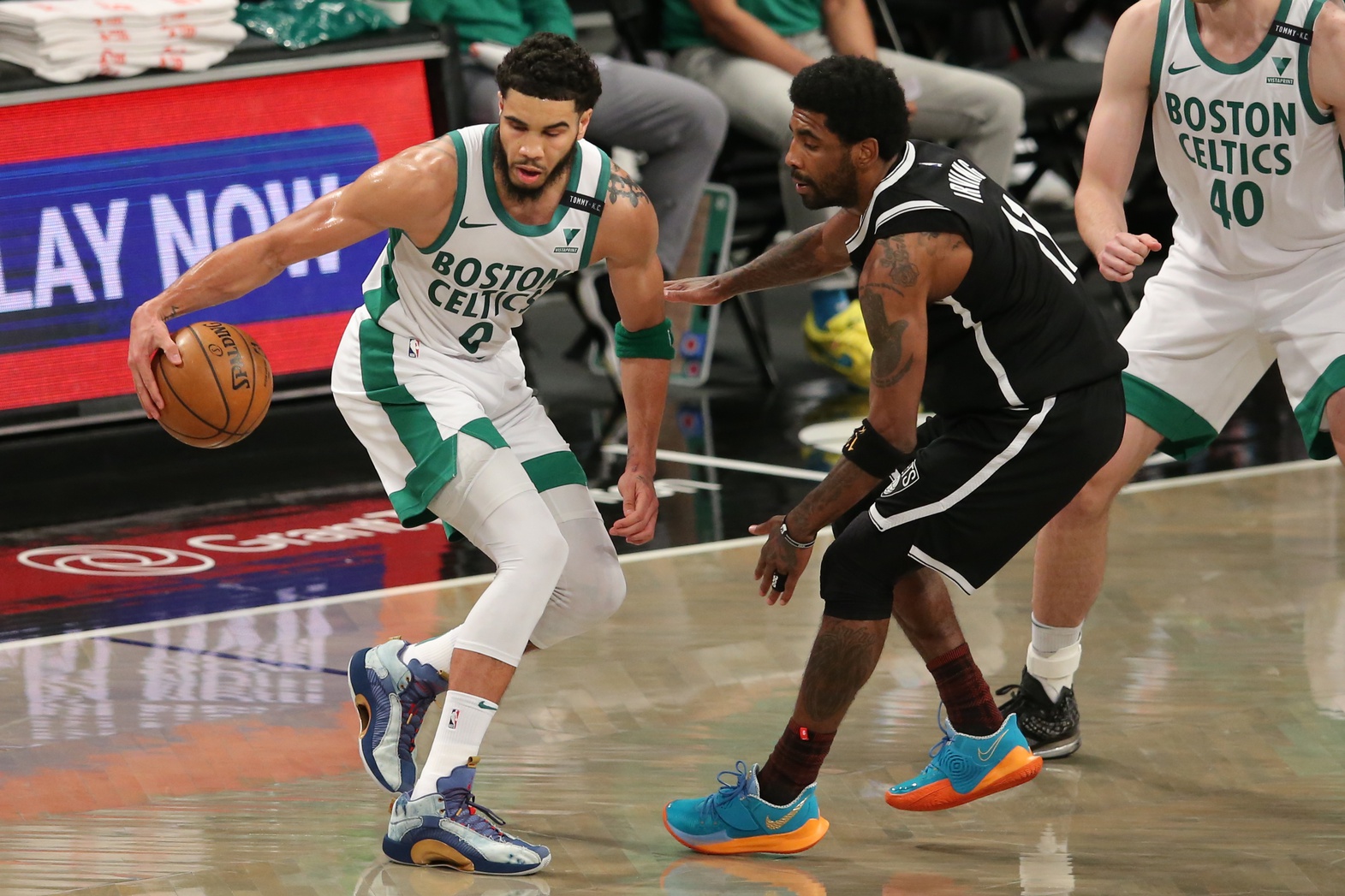 The Celtics couldn’t get it done against the Nets and lost 104-109, even with Brooklyn missing two heads of its Ghidorah (Harden and Durant). A near-Herculean effort by Jayson Tatum (38-10-4 on 51.9% shooting) didn’t make up for the absence of Kemba Walker and Jaylen Brown, the unfortunate presence of poor shooting and even worse ball-handling (19 turnovers) and sharpshooting from Brooklyn’s Jeff Green and Joe Harris.

Jayson Tatum is locked in early from 3 #Celtics Rewind presented by @tmobile pic.twitter.com/2rXS39duc9

Unfortunately, after letting Tatum rack up early buckets and put the Nets in a hole, the offense stagnated and Brooklyn took advantage.

Brooklyn took a bit of a lead but quickly gave it up as Tristan Thompson took advantage of the Nets’ weak frontcourt reserves to devour boards and putback opportunities. But in all honesty, this was a battle of awful shooting—Boston just shot somewhat less awfully.

Marcus Smart with the tough and-1 finish in traffic#Celtics Rewind presented by @tmobile pic.twitter.com/woy9spxl29

You could go to almost any playground in Brooklyn and see better hooping than those last 3 minutes.

Our man Mike ain’t wrong. It was a wretched quarter rescued only by Boston winning it, leading 25-21 after 12 minutes.

Some gross offense for the Celtics here. They've scored three points over the last five-plus minutes and are now up to seven turnovers for the game.

The Cs’ glory was not long-lived. Lacking Jaylen and Kemba is a significant deficiency, and the shortcomings of the Celtics bench only made things worse.

This quarter has been immensely frustrating to watch

We had a few nice moments, namely everything that Jayson Tatum did and also bits like this…

But the lack of firepower, clumsy turnovers and the versatility of the Nets made life pretty miserable for our heroes.

good news: it can't get worse than this quarter

Celtics are down 9 after the first half

Mind you, they were down only 9 because Tatum had 25 in 24 minutes of play. It could’ve been a lot worse.

Marcus Smart is doing his best to will Boston back into this game. His perimeter shot isn’t working, but he’s having success attacking the paint with his size and strength against smaller defenders.

Smart scored field goals on three straight possessions to stop what could’ve been some irreversibly bad bleeding, but the Cs still operated the third quarter just as unsatisfactorily as they had the rest of the game. And then when Joe Harris caught fire from deep and Blake f***ing Griffin did his whole “guys, I’m not washed; I just didn’t want to try in Detroit!” thing, it looked extremely dire for Boston.

Nesmith with the great hustle to kept the play alive! pic.twitter.com/z4qhDYcPdJ

There were intermittent moments after that, but in all honesty there wasn’t a lot much left of note. Take silver linings where you can…

Then a triple from Tatum and…

#Celtics down 3 and the Boston fans here at Barclays Center erupt. #Nets

Down to the wire it went, with Boston staying stubbornly two or one possessions down to Brooklyn, but unable to convert in the end as the game ended anticlimactically in a series of free throws.