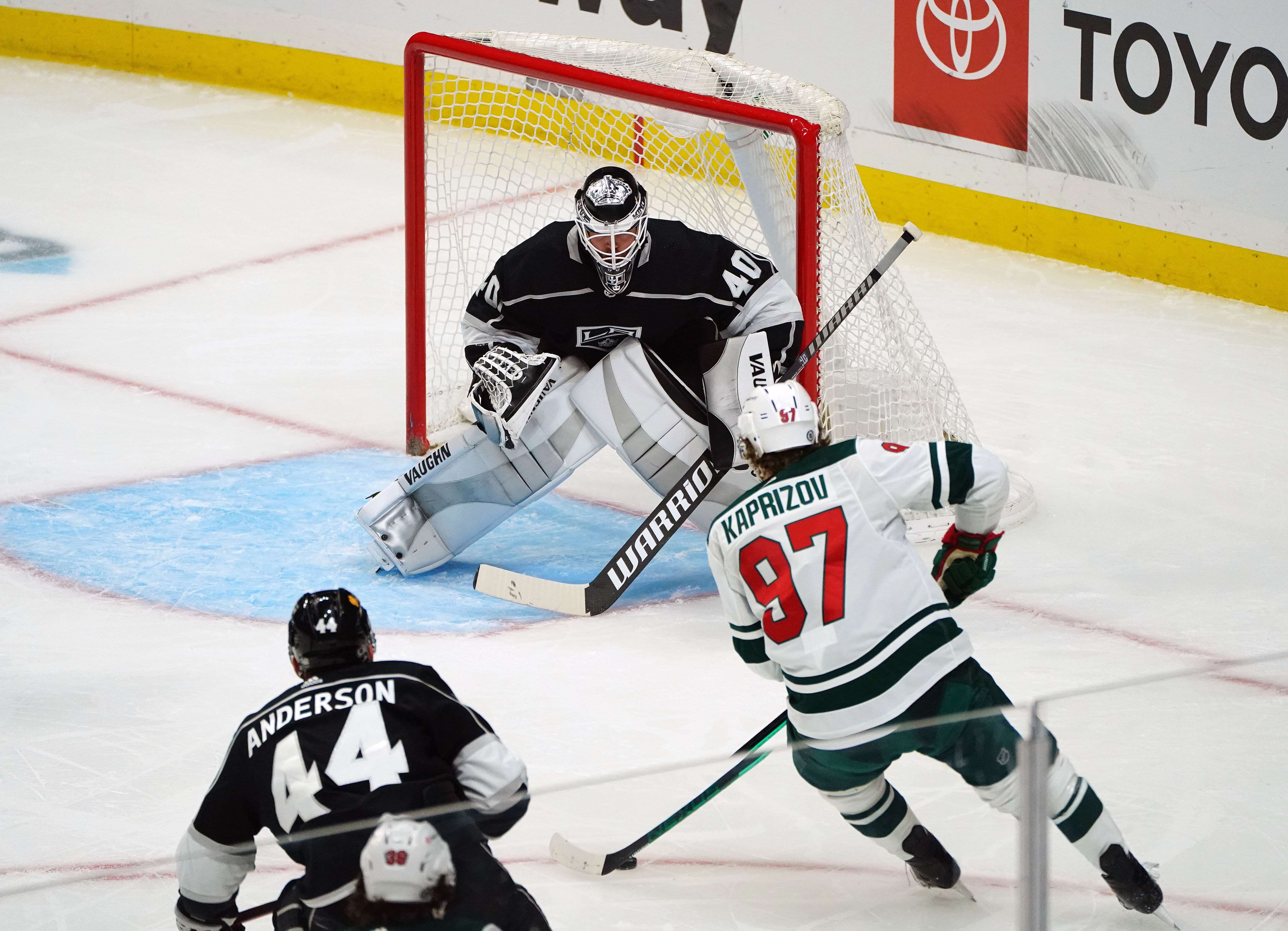 If you pay attention to Twitter at all, you will see a bit of a lobbying battle between Wild fans and Canadian media about the Calder Trophy race.  Wild fans are obviously lobbying pretty hard for ‘Dolla Bill’ Kirill Kaprizov while the Canadian media hellbent on giving ‘rookie of the year’ honor to Dallas’ (and Canadian-born) Jason Robertson.  I don’t think Kaprizov spends a lot of time on Twitter, but he took full advantage of his stage in Los Angeles to put on a show for the league to make his case they should give him the award.  A simple outlet pass by Jared Spurgeon was gathered up by the Russian winger and he’d give a short burst of speed and then dangle around Minnesota-native Mikey Anderson with ease and then beat Cal Petersen with a beauty of a shot.  1-0 Wild.

The Wild would perhaps get a bit too relaxed after Kaprizov’s goal as the Kings’ tried to pour it on to get back into the game and the persistence would pay off as Gabe Vilardi made a terrific pass from beneath the goal line out to Trevor Moore who was open at about 8-10 feet from the top of the crease for a quick strike just before the period ended (the puck crossed the line at about .9 seconds left) to tie the game 1-1.  Cam Talbot really didn’t have any chance on the shot as it was a bang-bang play but still it was an unfortunate late-period let down by the Wild.

The Wild would answer back on the power play, and after some nice work to win a battle for the puck along the boards by Victor Rask he’d dish the puck to Kaprizov at about the right faceoff dot and the skilled Russian seemed surprised at how much space he had and he seemed to want to pass the puck.  Yet with Los Angeles penalty killers backing off a bit, he had no other options but to shoot and so he’d fire a laser of a wrist shot by Petersen to give the Wild a 2-1 lead.  The Wild’s 4th line continued to be pesky offensively as Nico Sturm found Zach Parise with a pass and the alternate captain went right to the Kings net only to be stonewalled by Petersen to keep his team within one.

In the 3rd period, the 4th line continued to cause havoc for the Kings and it was Nick Bonino gathering up a puck behind the Kings goal and he’d try to attempt a wrap around that Petersen denied but Sturm crashed the net to bury the rebound to give Minnesota a 3-1 lead that really seemed to take the wind out of Los Angeles’ sails.  Petersen was clearly frustrated by the goal as he struck the crossbar angrily with his paddle as he tried to re-focus.  The Kings still had fight left in them, and Anze Kopitar would race into the Wild zone and he would feint at a slap shot off the rush that caused Spurgeon to hesitate a bit and the big centerman would swoop in below the goal line and back out front for a quick shot that just got underneath the arm of Talbot to make it one shot game at 3-2.  The Kings would throw everything they had against the Wild in search of the equalizer but Talbot and Minnesota was able to lock it down defensively.  Joel Eriksson Ek would block a shot late in the period and he would send a puck from the slot in the Wild zone the full length of the ice for an empty netter to seal a 4-2 Wild victory.  Cam Talbot had 40 saves in the win.

What did you think of the Minnesota Wild’s game against the Los Angeles Kings?  Tell us on Twitter at @CreaseAndAssist! 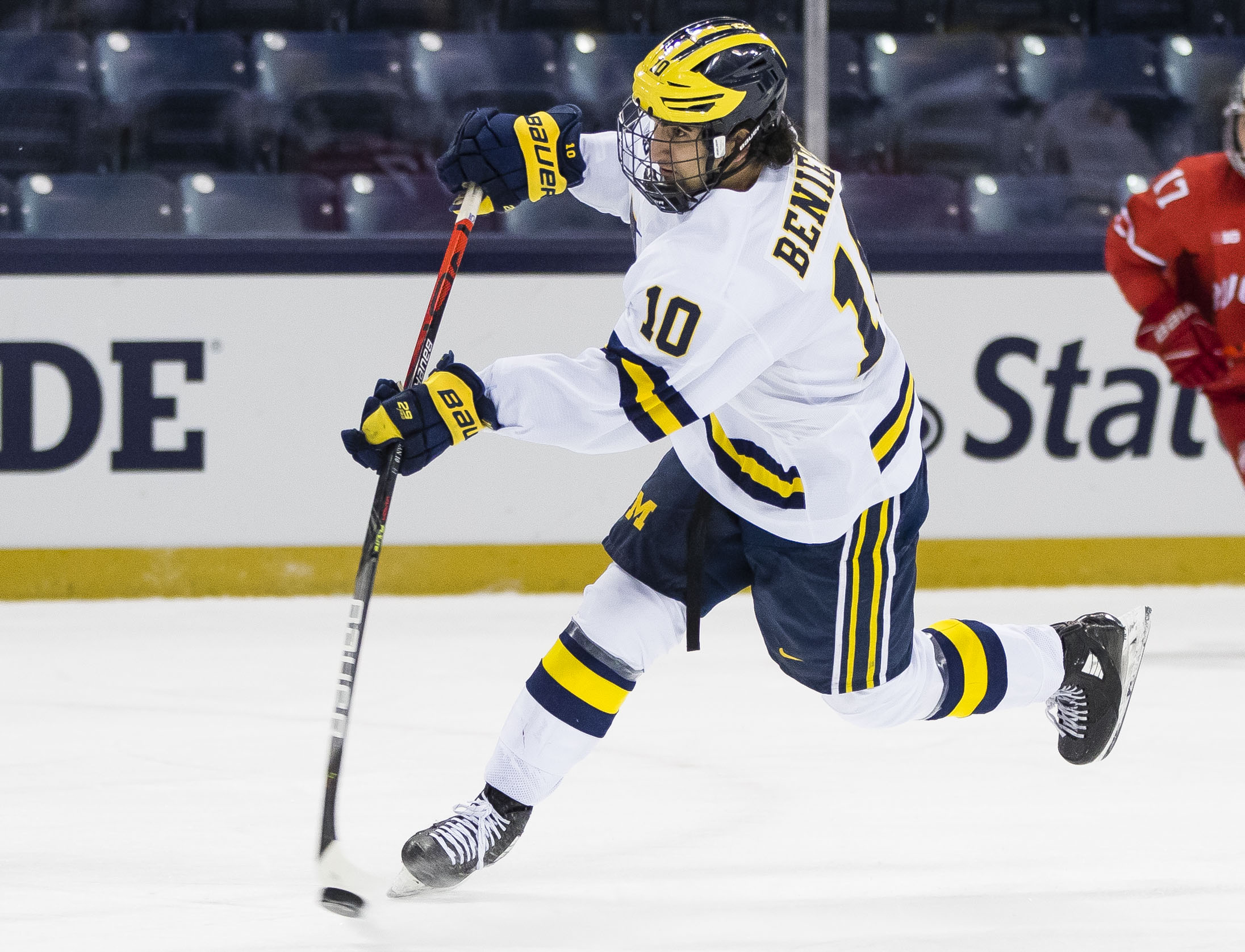 Unfortunately, the guy in the picture above will probably not be available when the Minnesota Wild go make either of its 1st round selections going into the 2021 NHL Entry Draft.  Matt Beniers, the speedy center who played well for Michigan and Team USA’s U-20 squad that won gold this winter will likely be long gone by the time the Wild make its two selections in the late teens and early to mid-20’s of the 1st round.

Still, the Minnesota Wild’s biggest need up front is at center and while they have some players in the prospect pipeline like Marco Rossi, Alexander Khovanov and Marat Khusnutdinov I still think the team would be wise to use at least one of its 1st round selections for that spot in the lineup.  So who is available that might be there when the Wild make its pick in the latter half of the draft?

TSN‘s Bob McKenzie just released his rankings which should serve as a fair barometer how experts see this draft which is a tough one to evaluate since so many players that normally would’ve played in Canadian Major junior were limited to a much smaller pool of games or none at all.  So here are 5 centers to consider when looking at this 2021 NHL draft class, all of them are players who I think are reasonable targets when you consider where Minnesota is likely going to select in this year’s draft.

Xavier Bourgault (Shawinigan, QMJHL) ~ The right-shot center from L’Islet, Quebec is a fairly well-rounded player for the Cataractes where he’s equally adept as a finisher and as a playmaker.  The 6’0″ center has a little swagger to his game and like his coach says in this short highlight film, he wants the puck on his stick in big game moments and loves to light the lamp.  McKenzie has Bourgault rated 17th on his list, but you see him rated in the mid-to-late 20’s by a lot of other scouting publications which should mean he’s a realistic target for the Wild for at least one of their 1st round picks.

Aatu Raty (Karpat, Sm-Liiga) ~ The left-shot center is already playing against men in Finland’s Sm-Liiga and putting up respectable numbers as an 18-year old.  The 6’1″ center brings a bit more size and two-way ability.  He probably projects more as a playmaker than a goal scorer, but he thinks the game well while on the move and he possesses a heavy shot.  This highlight film showcases his on-ice vision and excellent ability to handle the puck.  McKenzie has Raty ranked 20 on his list although most expert publications have him listed in their early teens which may make him more of a stretch to be available by the time go to make their selection.

Matt Samoskevich (Chicago, USHL) ~ Another right-shot center, the Newtown, Connecticut native and former Shattuck-St. Mary’s star is a crafty playmaker where he has been better than a point-per-game player in the USHL this season.  The University of Michigan-commit can really dangle and doesn’t shy away from the high traffic areas of the ice.  He can change direction very quickly, and good first few steps of acceleration to gain a step on opposing defenders.  While he likes to finish from in close off the rush, he has a pretty decent wrister.  This highlight film features his playmaking ability but you can see evidence of a high hockey IQ with excellent puck skills.  McKenzie has Samoskevich rated 31st and most experts have him in the late 20’s meaning he may be a decent target if the Wild’s primary target gets picked before they use their first selection or if the team decides to take a defenseman or goaltender with their 1st selection instead.

Zachary Bolduc (Rimouski, QMJHL) ~ The left-shot center might confuse some Wild fans for being a Matt Boldy clone with how he handles the puck in traffic and his terrific hands both as a set up man and when he’s sniping goals.  Like Boldy, Bolduc may not be a real fast player, but he has great instincts and seems to know where to be to score a big goal or to find a teammate through traffic.  He has a quick hockey mind that sizes up the situation and does what needs to be done given the situation.  His highlight film showcases deft hands, a nose for the net and a willingness to go into the high danger areas of the ice.  McKenzie has Bolduc rated 16th but most other draft publications have him listed in the late 20’s which makes him a viable candidate.

Francesco Pinelli (Jesenice, Slovenia) ~ The Hamilton, Ontario native was hoping to star for the Kitchener Rangers’ this season, but the pandemic submarined those plans so he ventured off to playing professional hockey in Slovenia where he’s competing against men as he tries to take the next step in his game.  Pinelli is a left-shot center who has great scoring touch and possesses terrific wheels.  While he will need to add more muscle to his frame, he has good instincts in the offensive zone and he doesn’t need a lot of time or space to get off a shot as these highlights illustrate.  My only concern is that he looks and plays more like a winger to me than a center.  McKenzie has Pinelli rated 24th while the experts are thinking everywhere from 20-30, so again another reasonable target for one of the Wild’s 1st round selections.

C – Andrei Svetlakov (CSKA Moscow, KHL) ~ To be impactful in hockey it doesn’t always have to mean you put up goals and assists (although those are always greatly appreciated) but for the 4th line center he tries to help his team on his draws where he went 5-for-9 and dished out 5 hits, 3 blocked shots and had 2 PIM’s in CSKA Moscow’s 3-0 win over Avangard Omsk on Tuesday.  The win evens the Gagarin Cup series at one game apiece.  Svetlakov has a goal, 4 points, 10 PIM’s and is +1 in 19 playoff games.