RECAP 49: Termination. Pens Shut It Down, Take Down Bruins 1-0

RECAP 49: Termination. Pens Shut It Down, Take Down Bruins 1-0 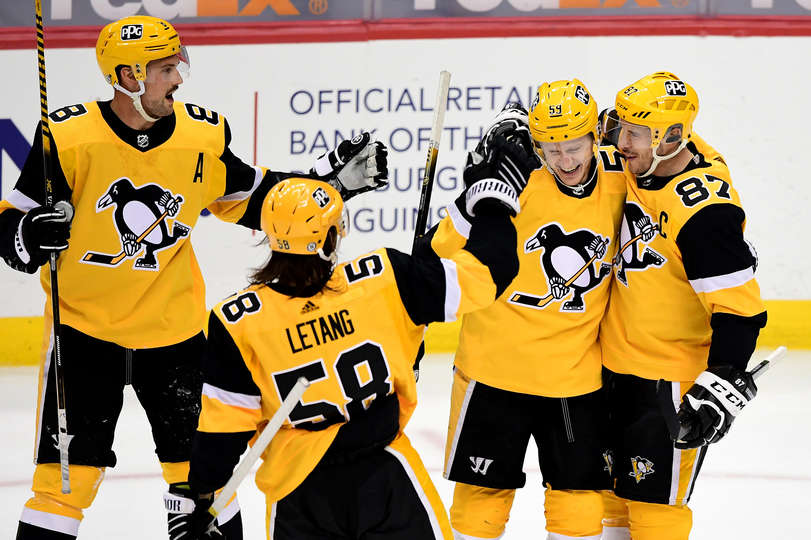 PITTSBURGH, PENNSYLVANIA – APRIL 25: The Pittsburgh Penguins celebrate a goal by Jake Guentzel #59 in the third period against the Boston Bruins at PPG PAINTS Arena on April 25, 2021 in Pittsburgh, Pennsylvania. The Penguins won 1-0. (Photo by Emilee Chinn/Getty Images)

If you’re new to hockey or calendars, let’s clear something up right off the hop.

This is primetime for playoff hockey.

And if you came here for playoff hockey, boy, did you ever get some.

And what a great time for the Penguins to put together their best, most complete 60 minute performance of the season.  Visually, they were a nightmare for the Bruins to unlock, limiting them to just one high danger shot on goal. 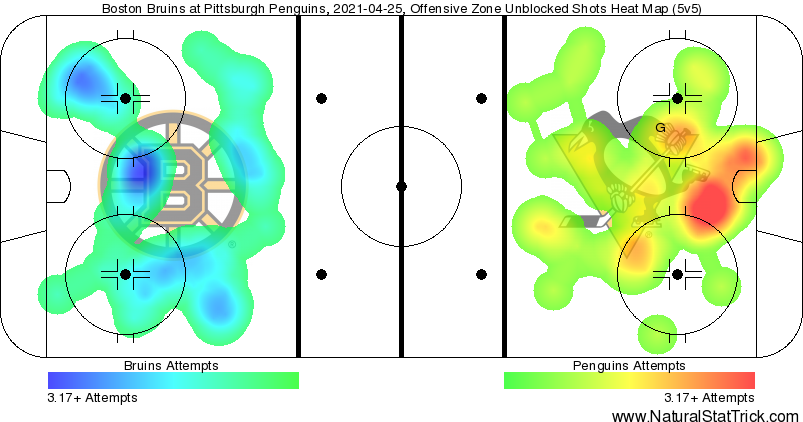 They threw the largest, wettest blanket you’ve ever seen in the defensive zone from the hashmarks in.  On top of that, they really dictated the play for the bulk of the game, too.

And, on top of all of that, they allowed just 2 high danger chances all game and just 2 scoring chances in the 3rd period as they closed the whole thing out.

They continue to prove that they can win games in any fashion and if that isn’t wildly important heading into the postseason, I don’t know what is. 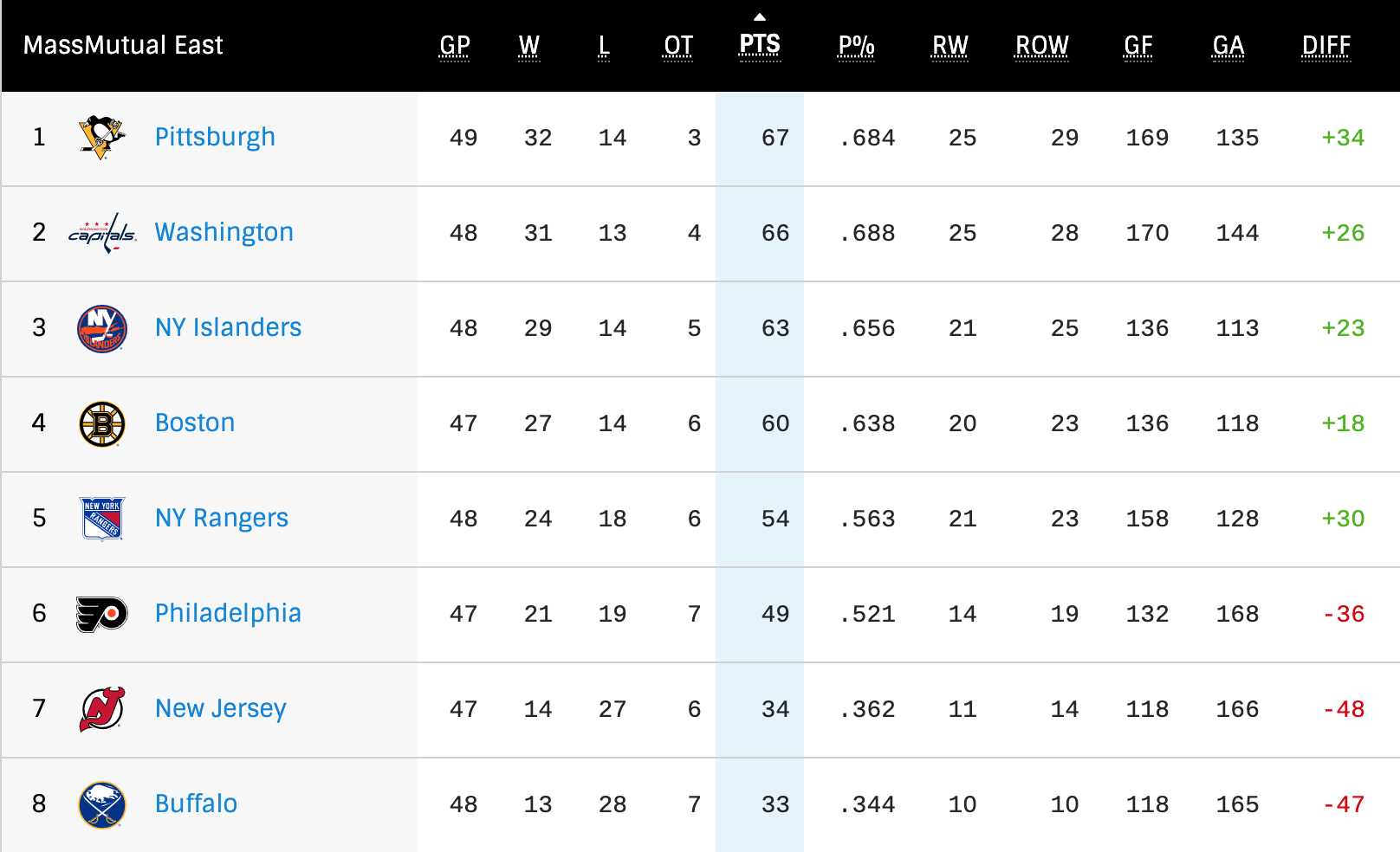 The view from the top will look great for the next few days.

Despite Blueger and Kapanen getting banged up in Saturday’s flawless victory over the Devils, both were in the lineup for this one as Sullivan made no changes to his skater group.

Lined up and ready for hockey. pic.twitter.com/zZlIl5PLlM

Patrice Bergeron was dealing with a foot injury and missed the Bruins Friday loss to the Sabres, but he’d return to his usual spot centering the Rat King and Pasta.

Jarry vs. Swayman between the pipes.

As you would expect at this stage in the season with these two teams battling for points and better playoff positioning, it was an extremely tight-checking affair to start.  The Pens dictated the play a bit more, registering the first 4 shots of the game through the opening 5 or so minutes.

Somewhere in there, Jeff Carter had a Big Dad Energy player that really got the blood flowing in all of the right places.  [Risky Click Of The Day Alert, cowards]

Carter is just the absolute king of slowing things down before burning you https://t.co/6iLUvFxumE pic.twitter.com/ZfM6JOPS1m

Bruins started waking up and generating stuff of their own, registering 6 of the next 7 shots over the following 5 minutes, but it was Kapanen with the best chance of the first frame, having his clean look denied by Swayman’s make on what was one of the cleanest, though not technically controlled, breakouts you’ll see.

What an absolute display from Marino here to just wheel and set it up.

Not that it was unexpected, but there were very few differences in how the second period opened and how the first period went.  But in the opening minute, Carter and Zucker got free on a little 2v1 that Zucker pitchforked towards the net, but it just wouldn’t go for them.

Of course, everything tightened back up more than your b-hole when you’re trying to sneak your bottle of water through a TSA checkpoint.

A few minutes later, though, Zucker almost scored another one after McCann held the puck in at the offensive blue line, but just couldn’t slip the backhander underneath Swayman.

This preceded Kapanen demolishing Lauzon in the neutral zone, a thing I’m not entirely sure anyone knew was something Kapanen had in his locker.

Pens were really buzzing as the period wore on and the Crosby line was especially looking threatening, but Swayman and the Bruins just had it all locked down more than a Covid hotspot.

Really looked like that could have been the opener.  Puck was in behind Swayman, but he recovered nicely, albeit desperately.

It did feel like the Pens were just living in the Bs end of the ice, but late on the Bruins top line looked dominant and menacing as they got a shift out away from the Crosby line, but neither Reilly nor the Rat King could finish on the looks they had.

That chance really got the Bruins turning the tide to finish out the period, but Jarry was called into action and responded with a smile after robbing Craig Smith from the slot.

Blueger and Crosby opened the period each with quality looks, but the breakthrough finally game on the Crosby line’s second shift of the period.

All started with an offensive zone draw.  Crosby didn’t win it, but Rust got in on Miller in the corner and put him under a ton of pressure that forced a panicked clearance.

Crosby held it in, it bounced around a bit and eventually made its way back to Rust for a shot attempt.  It hit the rough area of the corner that kicked it out high, but Dumoulin here is the key.

He activates, holds it in the zone and works it back to Letang to send it back around.  Dumo pops up again, this time on the far side to take Kuraly out of the play and allow Rust, who’s making a beeline to cover at the point, to pick it up and hold it in the zone.

When people talk about “puck support,” this is exactly what they mean.

Because as it jumps free, Guentzel is there all by his lonesome to pick it up and move it down to Crosby in the corner.

It’s a 2v3 at this point and Mike Reilly actually does well to try to jump Crosby’s feed to Guentzel, but Crosby puts it in a place that only Jake can get it.

And boy, did he get all of it.

The Pens didn’t necessarily go into a defensive shell, but man were they ever potent in getting their sticks and bodies in the way of everything: Bruins players, the puck, probably even traffic.  An absolute commitment to total team defense.  Zucker was especially noticeable, skating his sac off to hound every single puck in every single zone like he was my stupid dog trying to eat rocks.

Then, the Pens really started ratcheting up the pressure.  Guentzel and Crosby had a 2v1 that just missed completion.  That was followed up by a McCann 2v1 where he actually shot, but his stick failed him.  Carter and Zucker kept the pressure on until Blueger and ZAR hopped over the boards, where ZAR got in behind 1v1 with Swayman.  Turned aside, then Crosby and Co. came back out and Rust nearly buried a wraparound.

That took us to under 3 minutes left, where Swayman vacated the cage for the extra skater with 2:19 remaining.

Pens survived the opening sequence and Letang hit Crosby exiting the zone.  Guentzel with a yeoman’s like effort down low chasing down the puck ended with him drawing a high sticking penalty with 88 seconds remaining.

Carter line with Letang and Dumoulin on the back end ate up about half of that time in the offensive zone.  Chaos everywhere, but a Bruins offside with 41 seconds remaining gave them the chance to call a time out and get Swayman out of the net to make it 5v5, but it wouldn’t matter. Bruins again at the Can on Tuesday night.  Go Pens.

All data and charts via Natural Stat Trick. 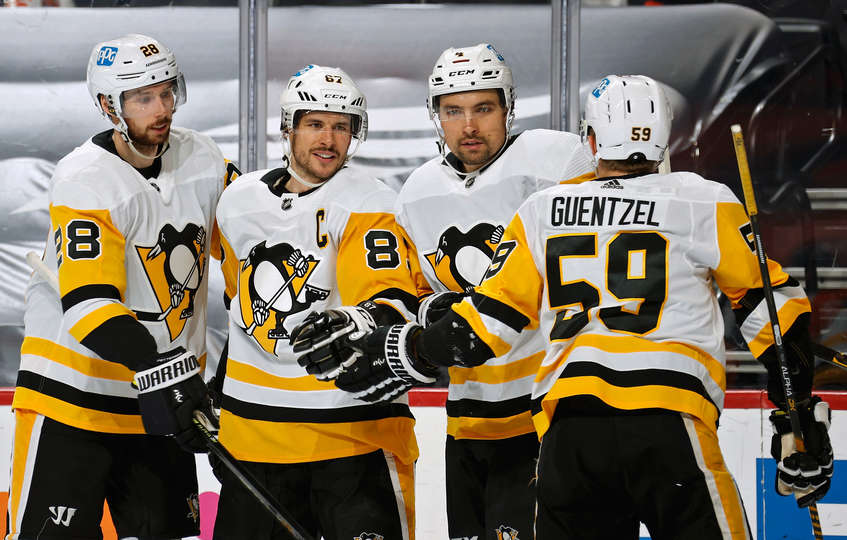 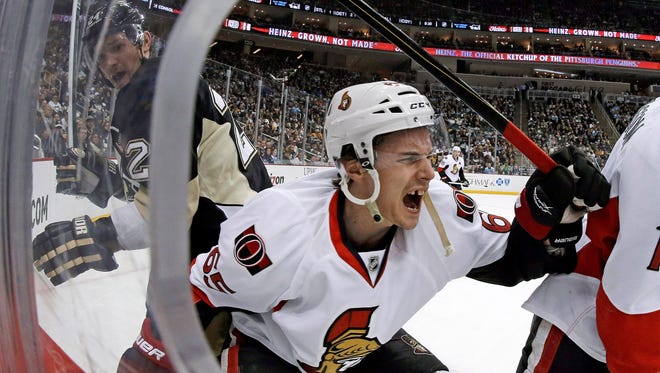