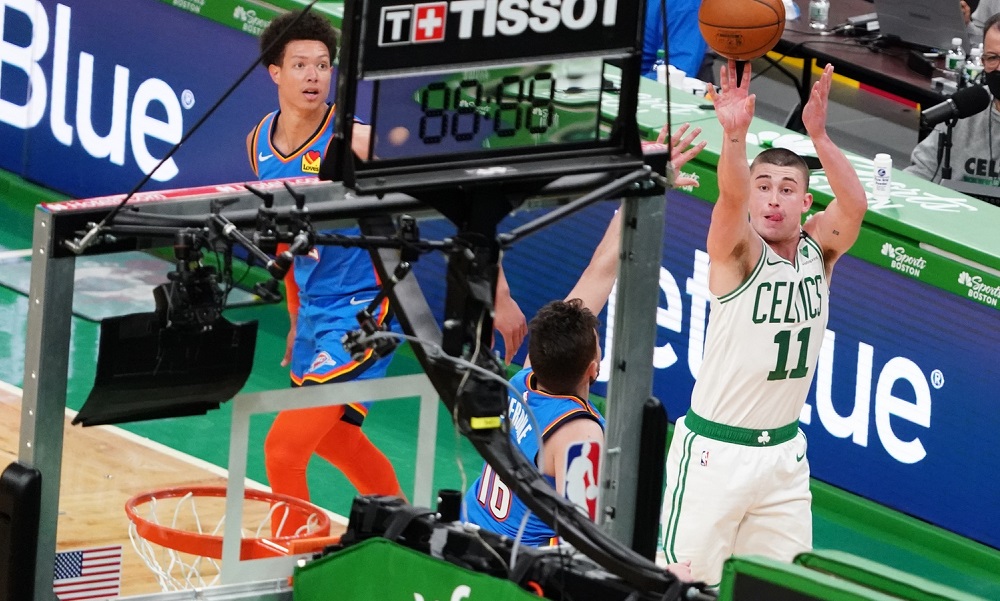 Fully aware that the less said about this game, the better, so we’ll keep this short.

1. Some Celtics came to play

With Tatum, Kemba and Timelord out, some fans on Twitter were saying Jaylen Brown needed to drop a 40-piece. He nearly did: 39 points on 13 of 26 shooting, plus 11 rebounds and 4 steals. It was the kind of performance we expect from an All-Star.

Payton Pritchard set a new career high with 28 points in 33 minutes off the bench. He should start whenever Kemba sits out. Let’s see who Brad Stevens goes with tonight.

And Luke Kornet was a bright spot, with 10 points, 7 boards, 4 assists and 3 blocks in 20 minutes. Far more effective than Tristan Thompson last night.

The Celtics lost to essentially a college team, or at best, a G League squad.

As Scal pointed out @nbcsboston, the average age of the NCAA National Championship Baylor Bears is two years older!! https://t.co/IS5LiTrfnO

Let’s also get this straight: the Thunder might be tanking for a better draft pick, but that’s management’s strategy. Players and coaches don’t tank – they desperately wanted to break a 14-game losing streak. The Celtics didn’t match their intensity, and paid the price just as they have so many times this season. (Looks back fondly at the overachieving IT Celtics.)

3. Shorthanded shouldn’t matter this much

A few facts about the Celtics missing three starters (still no excuse for losing to OKC).

#NEBHInjuryReport Brad Stevens says Kemba Walker will miss both tonight's game against OKC and tomorrow's game against Charlotte due to his left oblique strain.

While Kemba Walker will miss the next two, this was essentially a scheduled day off for Jayson Tatum, who's expected to play tomorrow night against Charlotte.

Evan Fournier is the 17th different Celtic to start a game this season.

For his career, Smart is a 32.1% shooter from the arc (on 1.5 of 4.7 per game). That’s not great, but we know he can get hot. Last season he broke the franchise record for threes in a game by making 11 (22 attempts) vs. Phoenix. But the Celtics lost that game.

And therein lies the problem. The more Marcus shoots, the harder it is to win. This season:

Those are the stats. Switching to the eye test, it seems like Marcus believes that if scorers are not able to play (like last night without Tatum and Walker), then he needs to shoot more and score more. In fact, he needs to facilitate more. In wins, he averages 6.3 assists; in losses, 4.6.

Last night, Smart missed his first nine threes, then finally made attempt no. 10. I give Smart credit for having the balls to take – and make – that final shot. But when the defense keeps leaving you open and you’re 0 of 9, shouldn’t that tell you something?

He’s just back from Covid and probably wasn’t ready to play 35 minutes, but with all the injuries, Evan Fournier got his first start as a Celtic. He struggled. His first attempt was an airball three, then he missed a dunk. Fans had his back, however.

Trash take on a player who is trying to work his way back. Folks need to chill and show some patience. https://t.co/kOFubXw73u

Fournier came out and stated he should’ve taken more time off and isn’t healthy/recovered yet. He’s dealing with the same Covid side affected that slowed Tatum down for an entire month. Let’s relax guys he’s playing to get some reps in when he’s struggling to even play

Fournier did hit two straight threes in the third quarter to spark a 20-6 surge that gave the Celtics a lead.

Fournier heating up from deep 👌 pic.twitter.com/fUUO8V0kYG

With just under a minute left, Fournier made a nifty steal and layup to cut the deficit to 5, but he missed a three in the final seconds that Boston simply had to have. He finished 4 of 14, 11 points, 7 rebounds and 5 steals. Once he gets his conditioning in order and restores his confidence by seeing some shots go in, Fournier should become a valuable contributor.