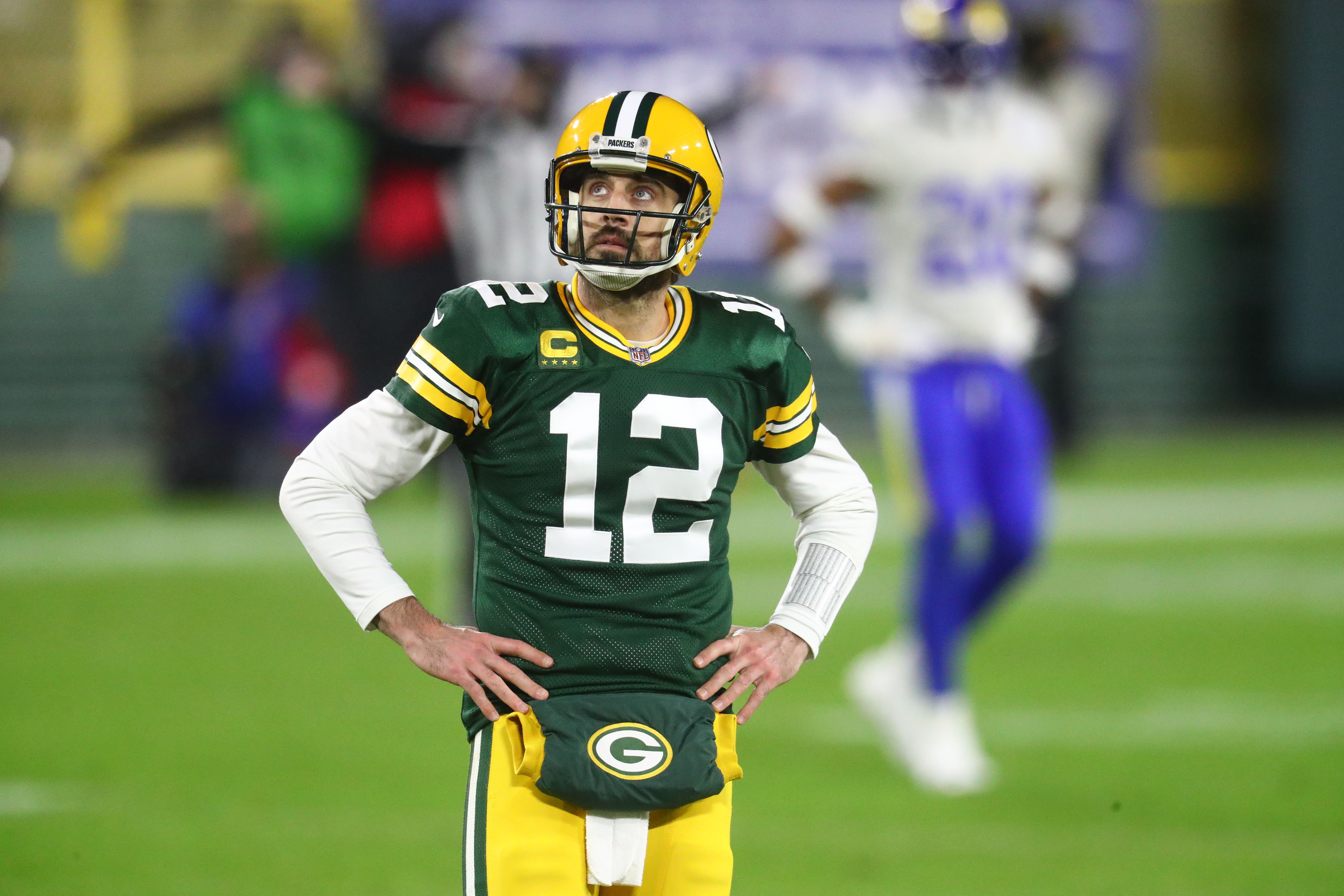 Before the 2021 NFL Draft even started, the Green Bay Packers were dealing with bad news. Media reports leaked that franchise quarterback and reigning league MVP, Aaron Rodgers had told the team he was not happy with the way things were going and that he may not want to play in Green Bay this season.

Apparently, the Packers and Rodgers have had ongoing discussions about this situation. GM Brian Gutekunst reportedly offered Rodgers a contract extension but the quarterback turned it down. Negotiations have been going on since shortly after the Packers loss to Tampa Bay in the NFC Championship Game.

Rodgers is still apparently disappointed about the Packers decision to trade up and select Jordan Love in the 2020 draft without notifying him of that beforehand. He is also reportedly frustrated by the Packers failure to build a better team around him and to address his needs.

Several reports indicate the Packers received trade offers for Rodgers including an offer from the 49ers that included quarterback Jimmy Garoppolo and the third overall pick in this year’s draft. However, Gutekunst reportedly told the 49ers and any other suitors that the team had no intention of trading Rodgers.

Gutekunst later told reporters, “As we’ve stated since the season ended, we are committed to Aaron in 2021 and beyond. Aaron has been a vital part of our success and we look forward to competing for another championship with him leading our team.”

The Packers now have their backs against the wall. The team’s entire offseason planning revolved around keeping as many of their own players as they could and gearing up to give Rodgers another chance to get to a second Super Bowl. With Rodgers, the Packers are Super Bowl contenders. Without their franchise quarterback, they are likely a team that struggles to finish above .500.

In 2017, Rodgers missed nine games due to injuries. The Packers finished the season 7-9 and were just 3-6 when Rodgers was out of the lineup.

The Packers 2021 roster appears to be deeper and more talented than the 2017 club, but backup quarterback Jordan Love has yet to take a snap in an NFL preseason game, let alone led a team in a game that counts. Even the most optimistic scouts admitted that while Love has the potential to become a quality NFL starter, he would need a few seasons of coaching and experience before he was ready to start.

With the first round of the 2021 draft now in the books, the Packers cannot get immediate help or value for Rodgers if they are forced to trade him. If Gutekunst cannot mend fences with Rodgers, the team will go from a Super Bowl contender to an also-ran almost immediately.

All of that took place before the first round of the draft started on Thursday night. The Packers used the 29th pick to select cornerback Eric Stokes out of Georgia.

Stokes has outstanding speed and at 6’1”, he has the height to replace Kevin King as the Packers CB2 by the end of the 2021 season. King was re-signed to a one-year deal with voidable years as a short-term solution at corner opposite Jaire Alexander. The Packers are hoping Stokes and Alexander will give them a dynamic pair of cornerbacks for the foreseeable future.

Stokes made four interceptions in nine games in 2020 and returned one of them for a touchdown. He needs to add some upper-body strength and improve his technique a bit, but most scouts feel he will be a strong player in zone coverage which the Packers expect to feature under new defensive coordinator Joe Barry. Stokes needs some coaching and may need to give a little less cushion to receivers when playing zone on short and intermediate routes.  He can play bump-and-run coverage as well which will give the defense some added flexibility. 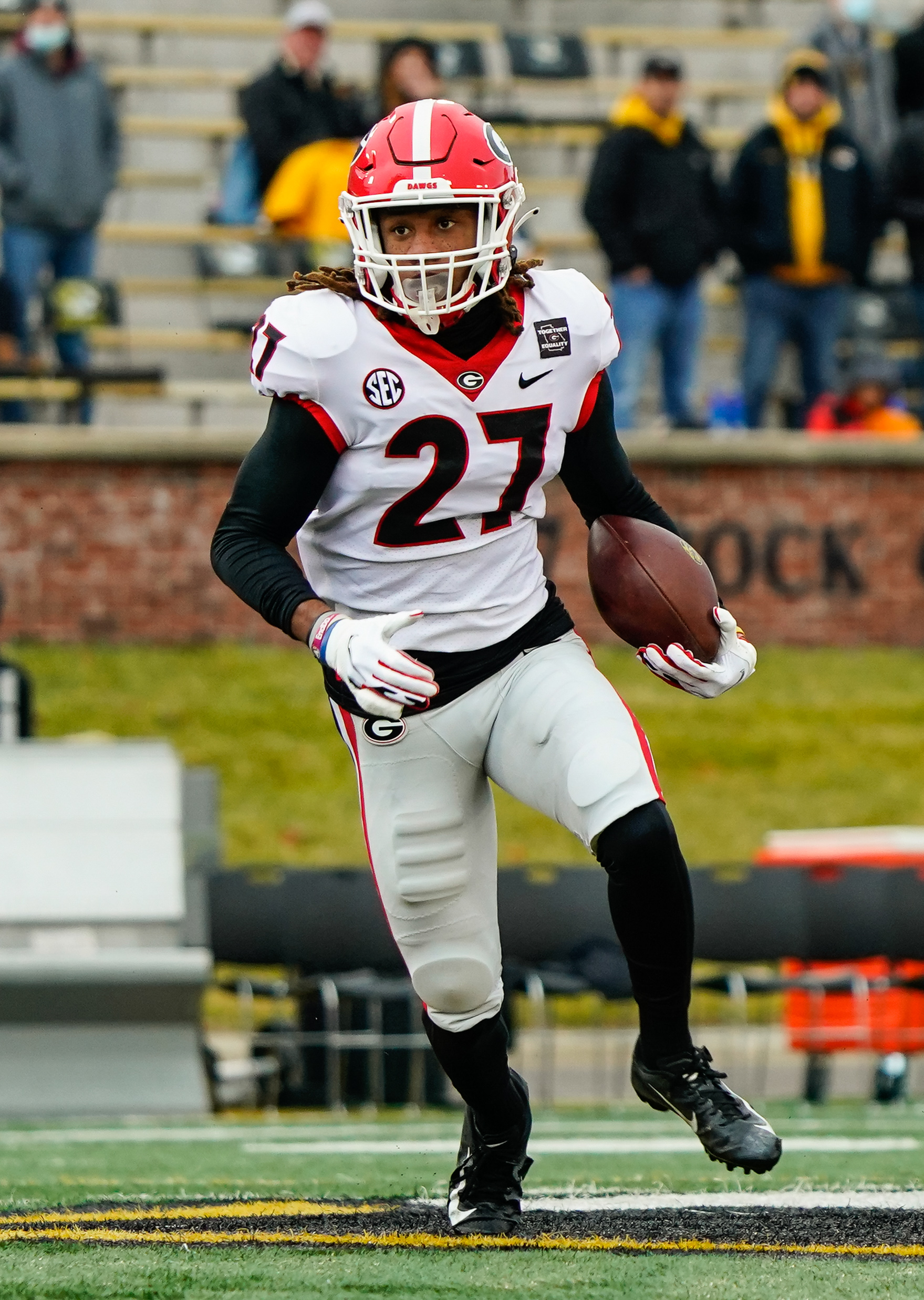 Stokes has elite speed and was timed a 4.25 in the 40-yard dash at Georgia’s pro day. He also has long arms and improved his ability to intercept passes in 2020. He does need to improve his tackling on running plays although few cornerbacks shine in this area of the game.

Unfortunately for the Packers, the selection of Stokes was overshadowed by the Rodgers crisis which now becomes the key to the 2021 season for the Packers.

Green Bay still has nine more picks to make over the next two days in the draft. Will they use some of those picks to placate Rodgers and give him another talented receiver to throw to or an offensive tackle to protect him? Will any pick them make have an impact on Rodgers’ thinking going forward?

When the Packers drafted Love last year, many people drew parallels to when the selected Rodgers in 2005 despite having Hall of Famer Brett Favre still on their roster. Favre was obviously unhappy when the Pack selected Rodgers and eventually, he was traded to the New York Jets in what proved to be a very messy departure. Unfortunately for the Packers, history seems to be repeating itself with Rodgers now wanting out of Green Bay.

The Packers cannot afford to lose Rodgers now and this announcement has the franchise at a crossroads. Gutekunst has his work cut out for him if he wants to make Rodgers happy enough to stay and make sure the Packers remain an elite team in 2021.