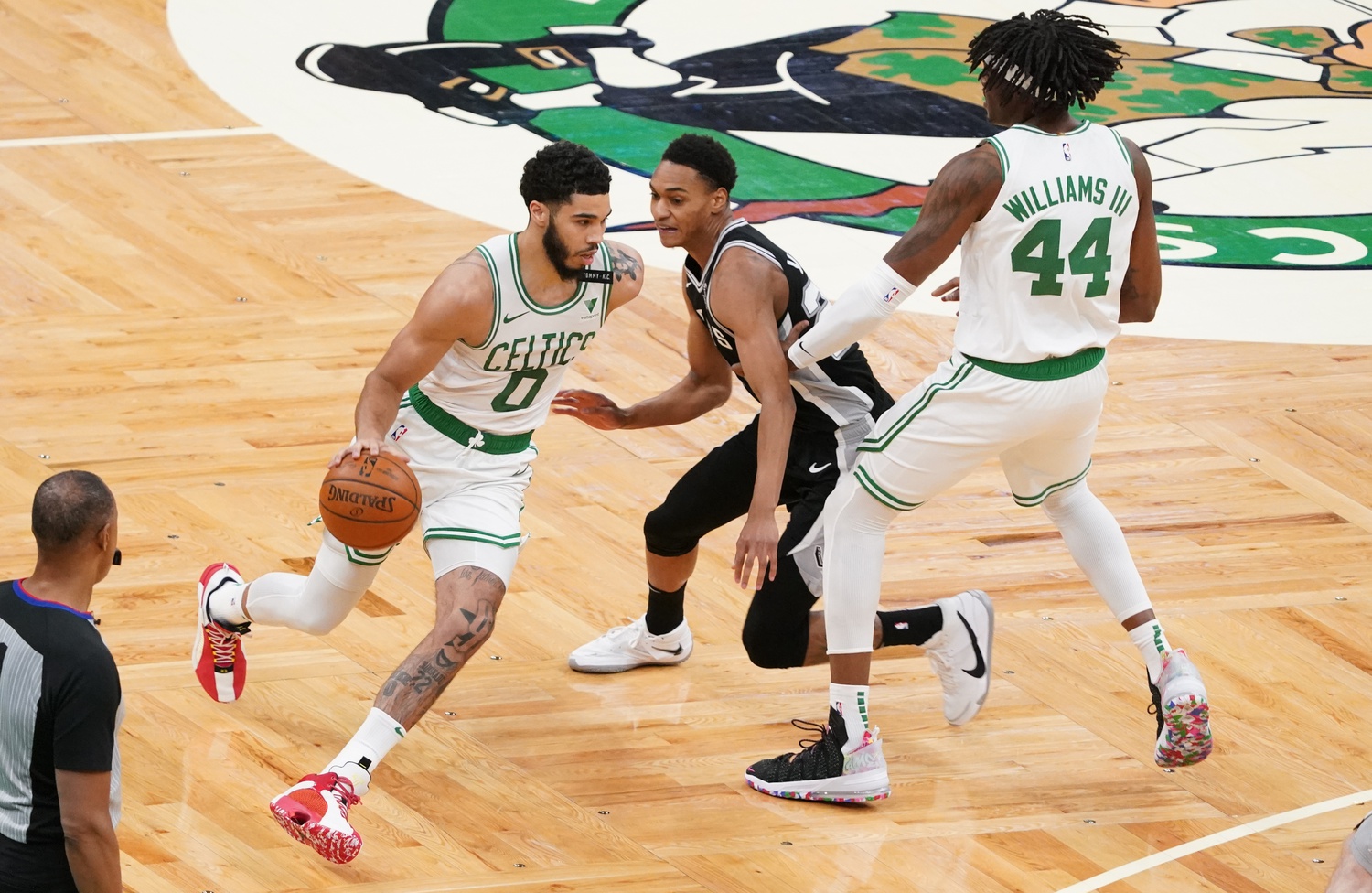 The Celtics, facing the Spurs at home, experienced what at first looked like  the absolute most hellish point of the season. It didn’t work out that way. Jayson Tatum matched Larry Bird’s single-game for record for points by a Celtic (60, alongside 8 rebounds, 5 assists and a block), and the Cs turned a 32-point deficit into a 143-140 win.

I don’t think a conventional top-of-the-recap summary makes sense here. Best way to depict the whiplash of this game is as I experienced it, which I tried to capture in real time.

The following sums up the first quarter better than just about anything else I could possibly write:

By the end of the first quarter, he would have 14 points, and the other Celtic players had…2. Total, thanks to Tristan Thompson rage-dunking on Jakob Poetl.

I appreciate Jaylen's energy, but the shots … not so much

(Even when other Celtics seemed like they were making their way out of the full-squad slump, circumstance would screw them as much as their own mistakes did. Thinking of that Jaylen drive against Poetl that ended in a BS goaltending call.)

Make no mistake, this was a result of the team shooting itself in the foot. Repeatedly. So that even when they’d have good individual moments or ball movement that looked right, none of it seemed to matter. It’s worth noting that San Antonio shot an absurd and clearly unsustainable 73% from the field in the first half, but the majority of that percentage was earned due to Boston’s mistakes. I mean, look at this:

Celtics trail the Spurs 77-48 at the half

When the best thing that happens for you in the game is having a flagrant-one call go your way (the call halfway through Q3 against Poetl for mauling Jaylen), you’re pretty much f**ked. (And, as Mike points out below, the hit was honestly worse than its classification.)

Boban got tossed for the same hit a few days ago.

Then, about 2/3 of the way through the third quarter, things started, at last, to click.

Evan Fournier with the 3 in transition #Celtics Rewind presented by @tmobile pic.twitter.com/xa0UBJBaFp

Jaylen cuts into the lead with a DEEP 3#Celtics Rewind presented by @tmobile pic.twitter.com/CHfZ4qMj4q

Good news for the Celtics is Aaron Nesmith can shoot again.

As Tatum tried his damnedest to will the Cs to victory and the Spurs lost a lot of their steam, DeMar DeRozan kept hitting big shots and getting to the line, and young soon-to-be-stars like Keldon Johnson and Dejounte Murray offered strong support. It ended up being the rookies Aaron Nesmith and Payton Pritchard, as much as Tatum, who cut the Spurs lead to single digits. And then:

Andddd the Celtics have tied this thing up. Still more than five minutes left. Just a rush from them to get back in this game.

It couldn’t all be roses, though:

Thompson gets a tough call on an illegal screen but Brad used his challenge already. #Celtics #Spurs

From then on it was back and forth until Tatum’s go-ahead:

JT FOR THE LEAD pic.twitter.com/hPFMsWjmjB

And then it was back and forth again until we hit bonus basketball, knotted 128-128.

With 56 points, Jayson Tatum is just four points away from the Celtics single-game scoring record, held by Larry Bird. Celtics still down 137-136 with 31.5 seconds left.

You could make a documentary on the last 30 seconds of the game alone (well, a short subject at least). The Spurs never went away, but between the big plays by Tatum, Brown and Nesmith, the comeback was real, and it proved once again that the Cs may be best when they’re counted out.

Simply on another level. pic.twitter.com/jI4uuW73hJ

JAYLEN BROWN KNOCKS IT DOWN pic.twitter.com/tfxPiohFUA

The Boston Celtics just completed the season’s biggest comeback (32) in OT as Jayson Tatum not only sets his career-high points in a game (60), but ties Larry Bird for the most points scored in one game in franchise history. Take a damn bow.