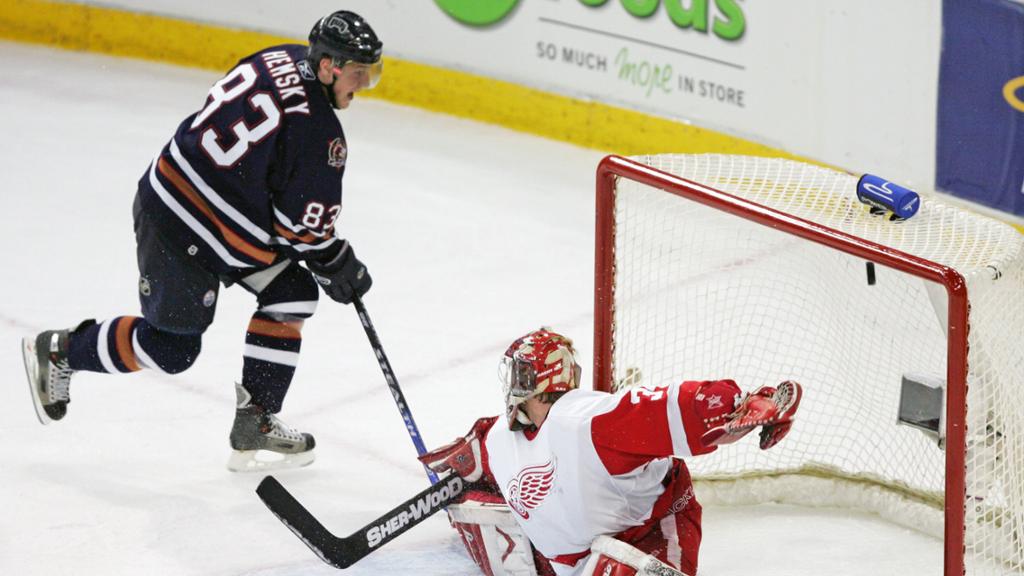 The Edmonton Oilers pulled off a gritty 3-2 victory over the Detroit Red Wings on Saturday, April 29th, 2006, to take a 3-2 lead in their Western Conference Quarterfinal series. The top seed in the West, and the best team in the NHL during the regular season, was on the brink of elimination when they walked into Rexall Place two nights later.

The Red Wings, finally, looked like the Red Wings through the first forty minutes of this game. Rexall Place was at a different level on this Monday night, but the Red Wings simply were not going to let their season end with a thud. Most people thought if the series got back to Detroit, with the Red Wings holding the momentum, that it would be all over.

Henrik Zetterberg scored his sixth goal of the series 14:36 into the first period to open the scoring. Robert Lang tacked on his third of the series at 14:02 of the second, and Detroit took a 2-0 lead into the second intermission.

The Oilers hadn’t done anything all night offensively. They were being suffocated and dominated by a Detroit team picked by many to win it all. Game 7? A virtual certainty. Edmonton’s first series victory in eight years, and first at home in 14 years, would have to wait.

Then, against the odds, magic happened. In a wild twenty minutes that is almost impossible to put into words, the Oilers stormed back.

Fernando Pisani, a hometown hero starting the run of a lifetime, scored twice to even the game at 2-2. Detroit regained the lead, but then Ales Hemsky struck. His first two goals of the series took a 3-2 deficit and turned it into a 4-3 lead with mere minutes remaining.

Countless Oilers sacrificed the body and blocked shot after shot in the final seconds. The building nearly collapsed from the eruption.

15 years ago tonight, one of the most memorable periods in franchise history occurred. Describing it would not do it justice. To get the full effect, one must watch the events unfold.

Edmonton’s victory was a stunner, arguably the biggest upset in NHL history. The Oilers win also completed a first in NHL history, as all four of the top seeds in the Western Conference were eliminated.

Edmonton’s series victory was their first since 1998, when a young Edmonton team upset the Colorado Avalanche in the Quarterfinal round. That team would fall to the Dallas Stars in the Western Conference Semifinals.

This version of the Oilers had a date with another formidable foe, the San Jose Sharks. The Sharks had the league’s MVP and Art Ross Trophy winner, Joe Thornton, along with Patrick Marleau and ‘Rocket’ Richard Trophy winner Jonathan Cheechoo. Many pundits expected them to suffer the same fate as they had eight years prior.

The Oilers were off to California to prove people wrong yet again and continue a run that was catching the eyes of the entire hockey world.

(For those interested, Game 6, in it’s entirety, cane be viewed below)