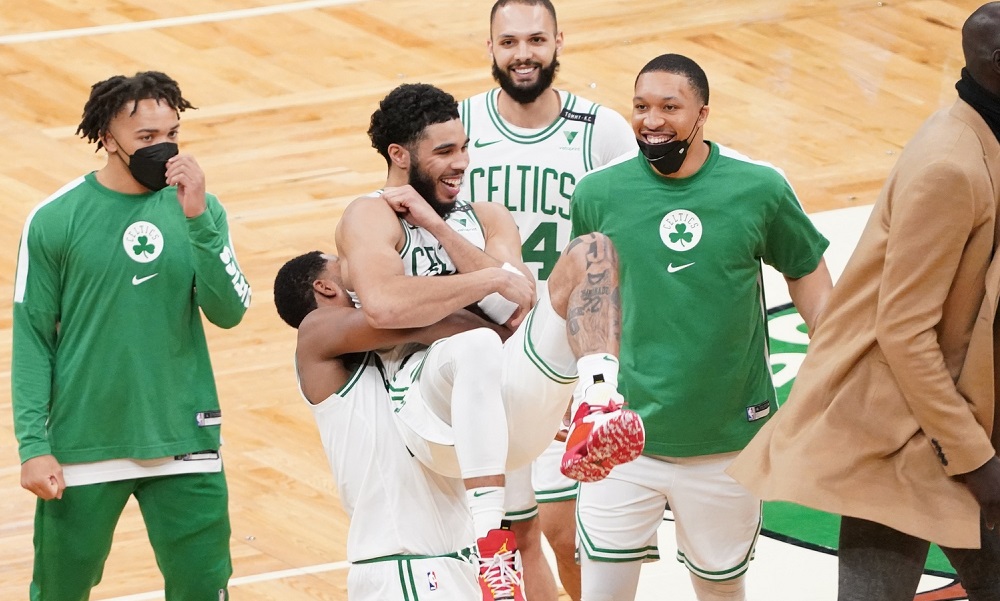 If you turned off the TV in disgust at halftime, with the Celtics losing by 29 points, this morning you’re probably wondering exactly WTF happened?

The Celtics found a new spirit, that’s what happened. They got their mojo back. And possibly they reached the turning point that will salvage this mess of a season.

Tatum's 60 points cause the Spurs to blow their largest halftime lead in franchise history 😳 pic.twitter.com/mrLgSagX5q

The Celtics looked like they reverted to their worst selves, playing one of the worst first halves of the season.

Jayson Tatum wasn’t having any of that — and he made some history on the way. A 32-point deficit was vanquished throughout the second half as Tatum and the Celtics just kept chipping away.

A dominant third quarter sparked a comeback effort, and unlike typical C’s fashion this season, they completed it in a wild 143-140 overtime win Friday at TD Garden. Tatum scored a career-high 60 points, tying Larry Bird for the all-time single game scoring record in C’s history.

The Celtics were outscored, 77-48, in a miserable first half before erupting for 95 in the second half and overtime. Stevens was pleased with his team’s resiliency afterward, but he had a measured tone because he did not want to forget what created the need for this historic comeback in the first place.

“To be candid, I was pissed, disappointed,” Stevens said. “We can’t be like that … I guess I’m dual emotions right now. I’m happy with the comeback. I’m happy with the effort. I love the way that we played and competed. But the starts are ridiculous. That was ridiculous, how we started the game. If we want to be any good, we’ve got to change that.”

In the first half, the Celtics saw what happens when they fail to defend (San Antonio shot a ridiculous 71.4%). Celtics Twitter was all doom and gloom, as the situation naturally seemed hopeless. The fans at the Garden told the team directly.

The Celtics were at their lowest point of the night at halftime, showered by boos from the home crowd as they retreated to the locker room.

C’s coach Brad Stevens told his players they deserved every bit of the low-pitched tunes as they faced a 29-point deficit to the Spurs. The Celtics were lifeless, going through the motions aside from a 24-point half from Jayson Tatum. They decided as a team — regardless of the shot-making, breaks or whatever happens — they weren’t going down embarrassed of their effort level, Jaylen Brown said.

In the second half, the Cs remembered what they’re capable of when they play hard (Spurs dropped to 34.1%), share the ball (18 assists on 29 baskets), and attack the rim to score inside and set up perimeter shooters (55.8% overall, 70.6% from three).

Obviously, Tatum was the key in this game, but there were contributions throughout the box score. Tristan Thompson snagged 15 rebounds, blocked 2 shots and tallied 5 assists. Evan Fournier and Grant Williams each made a pair of threes. Robert Williams posted 10 points and 9 boards. Marcus Smart played under control (just 6 shot attempts) and dished 12 assists. And Jaylen Brown, who shot poorly and was scoreless in the fourth quarter and most of overtime, stepped up and drilled a triple to take the lead for good with 16 seconds left.

And Aaron Nesmith – wow, he’s making an impact. Details about him below.

The Celtics have the talent to go far in the postseason. They just need to play the right way. Let’s hope they remember to do that – from the opening tip – every single game the rest of this season.

On Page 2: Tatum is a bona fide stud

The Celtics beat the Spurs 143-140 in overtime because of Tatum’s relentlessness. He didn’t attempt a series of wild shots or contested 3-pointers. He attacked the rim. He shot over overmatched defenders in the midrange. He got to the free throw line and, oh yeah, he mixed in the occasional 3-ball.

It was a brilliant performance, a testament to Tatum’s true offensive talent. He is 23 but it seems as if he’s been the face of this franchise for 10 years. He has his share of critics, especially during this trying Celtics season, but Friday was a reminder that the Celtics have an untouchable player; the type of star who can eventually led teams to championships.

“That boy,” teammate Jaylen Brown said, “is destined for greatness.”

Globe: Jayson Tatum makes his points to any doubters with legendary performance

Star of the game

Not much else needs to be said. The Celtics would have gotten obliterated if it wasn’t for Tatum. Instead, he got a celebratory shower in the locker room.

Jayson Tatum tied Larry Bird’s Celtics’ franchise record for points in a game, and he probably should have broken it — in the final seconds, he was mildly robbed of a continuation that would have given him a shot at 61.

Bird, of course, didn’t need overtime. Bird also didn’t lead his team back from 32 points down for a dramatic victory. Little column A, little column B.

Per @ESPNStatsInfo, Jayson Tatum is the fifth player in NBA history with multiple 50-point games in a calendar month prior to the age of 24 https://t.co/tYb5oh38ia

Tatum lived at the line because he didn’t settle for threes. He took 30 two-pointers, 26 of them in the paint, and made 5 of just 7 attempts at the arc. Here are all the moments from his special night.

Aaron Nesmith: Suddenly he’s turning into a cult hero in Boston thanks to his incredible hustle. For example, he missed a layup but then immediately dove for a loose ball, won the ensuing jump ball, and then tipped in a miss. His steal at the end of overtime essentially sealed Boston’s win. He also hit a couple of big 3-pointers. All of a sudden, something has snapped into place for him.

Boston also got big minutes from rookie Aaron Nesmith, who had the best game of his career by far, playing down the stretch and in overtime and finishing with 16 points and six rebounds, including a couple of critical offensive rebounds and putback buckets to help tip the scales in Boston’s favor late in the game.

Nesmith set a career-high for the second straight game with 7 of 9 shooting, including 2 triples. He was a team-high plus-12 in 30 minutes. He also played defense.

Aaron Nesmith saves the game for Boston. What a ride. What a game by the rookie. pic.twitter.com/C2vTLKPi65

Boston has been looking for wing depth most of the season, which is why they traded for Fournier. Nesmith has mostly been stuck on the bench all that time, but he’s emerging just when he’s needed most.