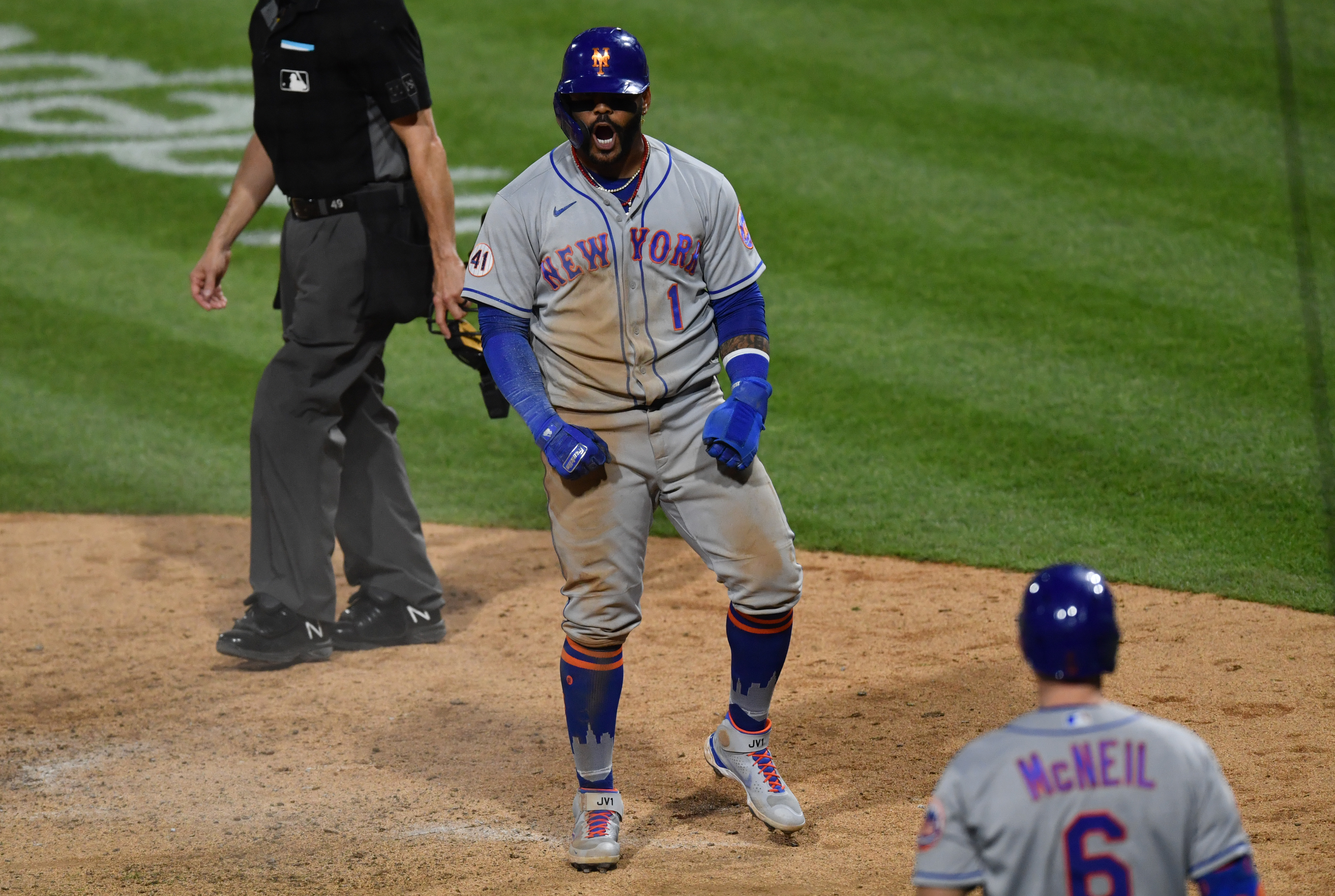 Of course, I can say that now that is over, and there was certainly a circuitous route that the Mets took to get there. But now that it’s over, you can’t argue that this is probably the first game since the 80’s where the Mets received every break and every bit of good karma that they could possibly have received.

First thing, and I’m going to start earlier than I should, is that I agreed at the time and still agree with the move to bring in Miguel Castro in the 6th to face the meat of the Phillies order with the Mets up 2-1. Now this was before I realized that Didi Gregorius was something like 6-for-15 against Castro, and Gregorius smacked a home run to make it 4-2, seemingly sending the game to the middle of the ocean forever. But with David Peterson getting barreled up pretty good early in the game, it would have been tempting fate to leave him in, and Castro has been good all season. (What really hurt was the error which allowed Bryce Harper to reach first base.) 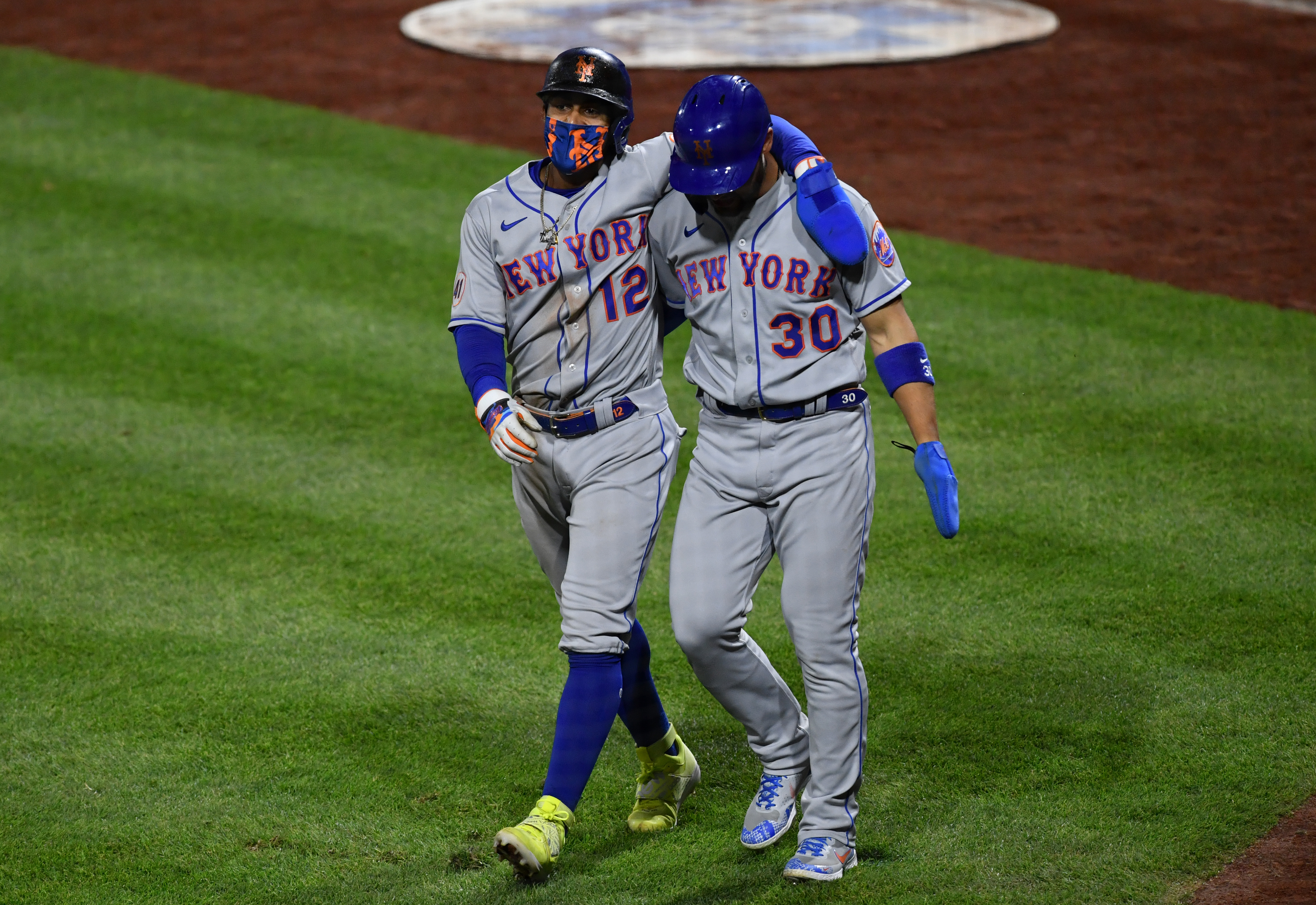 But such an inning existed so that we could have the top of the 8th, perhaps my favorite half inning since Piazza capped off a 10 run 8th with a dinger off Terry Mulholland. Kevin Pillar, who is getting playing time because Brandon Nimmo couldn’t start the game with a bad finger (and because he’s Veterany McVeteran), led off with a dinger to cut the Phillies lead to 4-3, and it was his third hit of the game. Jonathan Villar then reached on an infield single, which was followed by James McCann flying out on what could have been a hit and run, but we’re not really sure. But then came the first true gem of the game: Jose Peraza, who was pinch hitting, laced a single off the glove of Rhys Hoskins which sent Villar to third. Then, with Hoskins pulling a David Cone and holding on to the ball for dear life, Villar turned into Ernie Whitt and scored, making Hoskins look like a fool which, let’s face it, he deserves to look like.

But if that wasn’t enough schaudenfreude, in comes Jose Alvarado who was eligible to pitch on Sunday because he appealed his three game suspension for being a jackass. The fruits of that decision started getting plump with a first pitch single to Jeff McNeil to put runners on first and third. Then, Alvarado walked Francisco Lindor, who earlier in the game flied out harmlessly to right field with the bases loaded and two outs as he continued his stretch of pressing to start the season. But Lindor was patient, and Alvarado was clearly trying to throw the ball 200 mph, and Lindor drew a walk to load the bases. Then Michael Conforto came up with the bases loaded, and Alvarado was worse, missing badly on his second five pitch walk, this one bringing in the go ahead run. So when you think about it, this inning featured a vapor lock by Hoskins, and Alvarado completely melting down. What more could you possibly want out of this inning?

Well, you wanted a big hit with the bases loaded by Pete Alonso, who jacked up Alvarado’s ERA with a three run double to right-center to give the Mets an 8-4 lead to put the game away.

Edwin Diaz was sent in for the 9th with a four run lead. Yes, Diaz with large leads in Philadelphia bring back horrible memories, and Diaz on back to back nights is a horror show (4.60 ERA and a 1.22 WHIP going into tonight). But Diaz has been very good this season, and worrying about a meltdown was so 2019. I mean, we’re all just leaning on our Post Traumatic Mets Disorder on this one right?

Diaz wasn’t right from the beginning. His first five pitches were all balls, and it wasn’t a case of the ump squeezing him. He missed badly. But after walking Gregorius, he came back to get Nick Maton on a pop up, and I started to calm down. Didn’t think there was any way that Diaz would blow this. But then came the egregious mistake, and I’m not sure I’d call it a mistake, but just a moment that shouldn’t happen. Diaz gave up a line drive triple to Roman Quinn to score a run to make it 8-5. Now on most nights, Diaz should completely outclass a P&J hitter like Quinn. But giving up a hard hit triple to him is one of those mistakes that lead to big innings.

Now Diaz came back to get Odubel Herrera, and only had to get Matt Joyce to end the game, but losing him would bring up Hoskins with a chance to tie the game. Unfortunately, Diaz lost Joyce as he yanked a 3-2 slider and Hoskins came up. Of course, everyone feared the worst, and the worst happened as Hoskins lined one into the seats in right field to tie the game 8-8.

But wait! In a twist of fate that only Philadelphia native M. Night Shyamalan could come up with, replay showed that the ball clearly hit the top of the fence, and not the seat in the front row. Thankfully, replay did the job that was intended for it, and Hoskins had to return to second base. Even though the evidence was clear, Hoskins still whined like a brat, which is what he’s best at. Any more histrionics from him and he would have been Jonathan Papelbon.

So after Diaz ran towards the light, the Mets were rescued from the other side of the grim reaper, and Jeurys Familia came into face Bryce Harper as the winning run. After Familia was robbed on the 0-2 pitch to Harper, I thought that maybe the karma was going to run out. But Jeurys bounced back to strike out Harper to end the game and give the Mets a wild 8-7 victory. Just as Castro giving up the home run to Gregorius had to happen for us to have the top of the 8th, Diaz imploding had to happen so Hoskins could cry about having his home run taking away. He must be furious, and he deserves it. He was the one player who wasn’t suspended or fined out of that entire sequence on Friday, so at least he has Sunday night in his soul. And I hope it lasts all season. I’m not petty or anything but …

Oh who am I kidding. I’m absolutely petty.

As for the Mets, they win the series against the Phillies which, after Friday’s debacle, is doubly delicious. But Monday will be interesting as it’s a bullpen game, and Edwin Diaz will most likely not be available after going back to back, and having his back tighten up during the inning. So they will most likely depend on Sean Reid-Foley, who is from Guam, and Robert Gsellman to get it done against Adam Wainwright. Look, if the Mets can make up mental coaches, maybe they can conjure up a distant relative of Darren Oliver, Elmer Dessens, and Sidd Finch to give the Mets some length tomorrow.

Okay, so I don’t want to numeralize this, because it limits me.

As you all know, Sunday’s game was on ESPN. I knew that Matt Vasgersian would say something dopey like “Bobby Bonilla, Mike Piazza, and Carlos Beltran all clicked in New York immediately upon arrival” (true story), and Alex Rodriguez would no doubt try to explain why a two run lead was better than a five run lead, I watched the game on ESPN Deportes. Then in the fifth inning, I did the work and synced up the game with Howie and Wayne on my phone.

Watching the game with the radio call up crystallized the fact that ESPN missed a ton of pitches coming out of replays and graphics. Some of it had to be the graphics that Deportes put up, but I’m sure some were out of ESPN’s own replays. But there were at least four pitches that were completely missed or upcut on the coverage. I understand that it is surely confusing to produce during these times, but all the more reason to go with the “less is more” strategy. Don’t let dinner get cold because you’re shoving dessert down my throat.