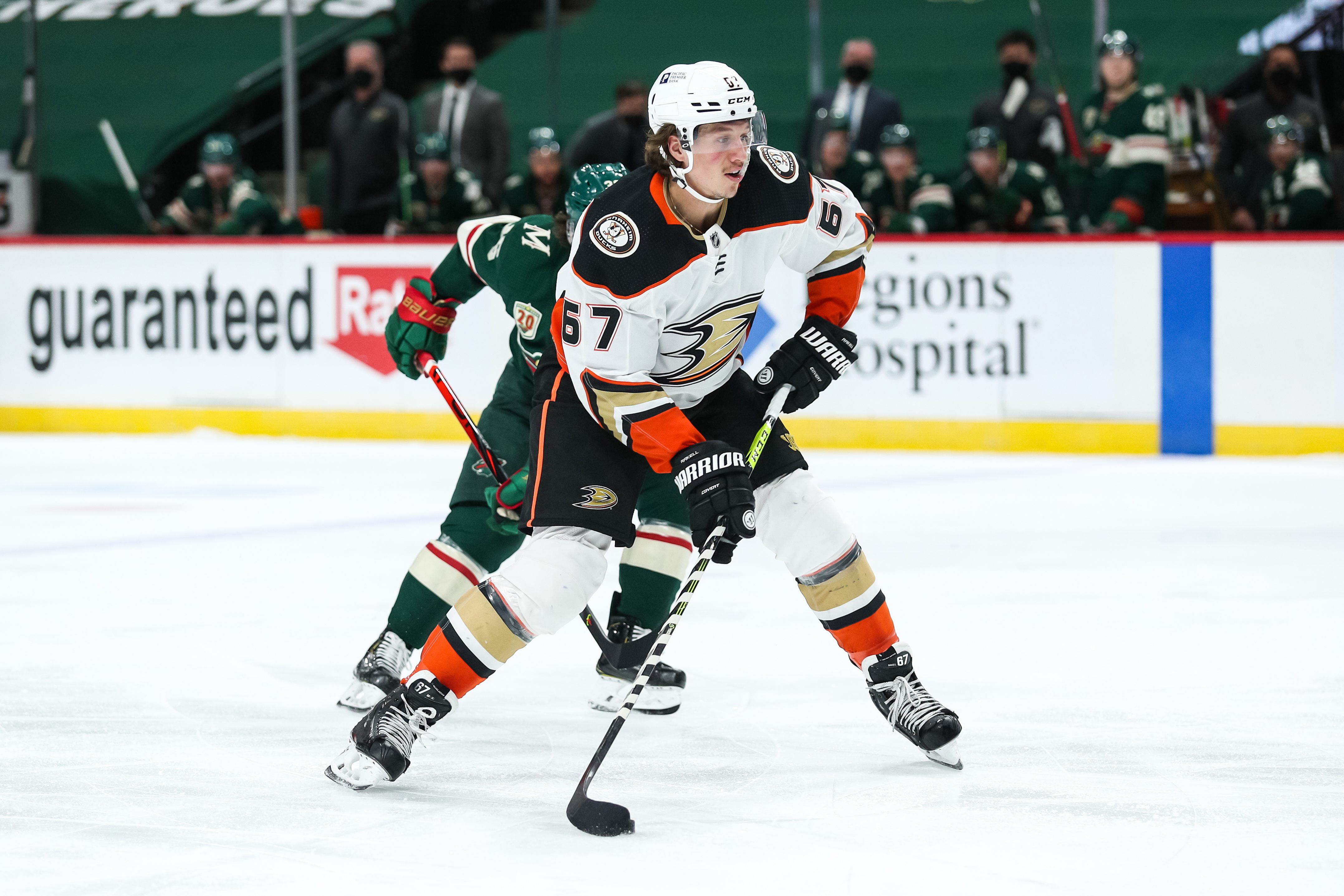 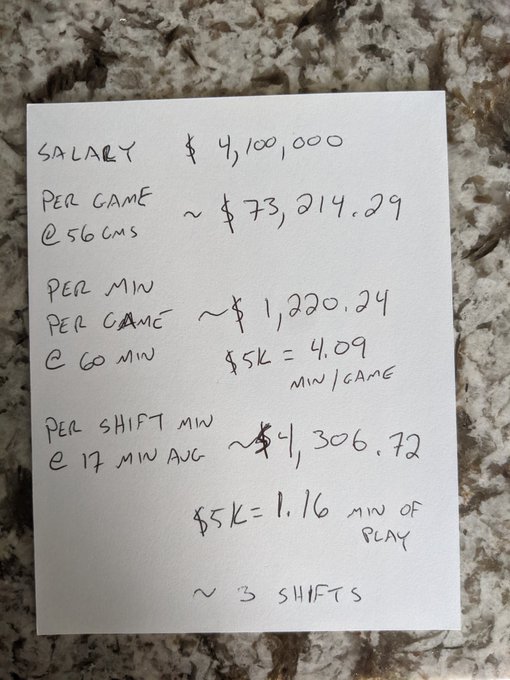 Let me explain the picture above.  On Monday night, when Washington’s Tom Wilson decided to go crazy and not only punch the New York Rangers’ Pavel Buchnevich in the back of the head after he had fallen to the ice, he also pulled the hair and tried to body slam Artemi Panarin to the ice before he made his way to the Capitals’ locker room.  While Wilson got kicked out of the game for his antics, many expected some severe discipline from the NHL Department of Player Safety since he is a repeat offender.  Instead the hockey world was given the news the NHL Department of Player Safety handed Wilson a $5,000 fine and that was it.

Many NHL fans were not having it and went to Twitter to vent their frustration.  So did a friend of mine who took Wilson’s salary and calculated how much this would really cost the Capitals winger and thus the math you see above.  In a whopping 3 shifts, he will have made the equivalent of the paltry $5,000 fine which is the maximum allowed by the current Collective Bargaining Agreement.  Woopty doo.  Wilson, who posed in the penalty box by flexing for the crowd clearly didn’t worry too much and that is part of the problem.

The New York Rangers were certainly not sitting on the sidelines and they issued a statement which is the reason I bring it up here. 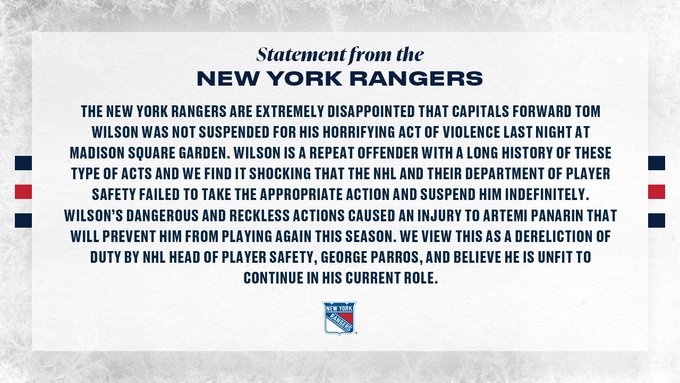 The Rangers rightfully call out the league for its weak action as well as the person in charge of it in former Anaheim Ducks’ enforcer George Parros.  However it was not without some blow back as the Rangers then fired Team President John Davidson and General Manager Jeff Gorton.  Its hard to believe that this was done strictly for performance reasons on the ice.

Former Minnesota winger Matt Cooke chimed in on the incident, as he once was a player who seemed like ‘Public Enemy #1’ on the ice during the prime of his career.

“You know, he’s been given a bit of leeway just because, you know, when hits happen within a game, they’re gonna go wrong. They just are. The game is played way too fast for them not to, right?

While some may think its highly hypocritical of Matt Cooke to call out another player’s on-ice behavior it also comes from the perspective where the league finally told him that enough is enough and they’d drum him out of the league if his on-ice shenanigans continued.  The league could’ve done that with Wilson and would’ve been well-justified in doing so, but they chose not to.  Why?

Maybe because they have no idea what they’re doing.  I know years back the Athletic’s (before the Athletic was even an idea) Sean McEndoe gained fame with his famous NHL Suspension Flow Chart.

Just replace Wilson for Chris Pronger on the flow chart and seems to fit with how discipline is still applied albeit over 10 years ago since McEndoe created it.  Either way, its frustrating to see that they give out suspensions for simple hits like we witnessed earlier in the season for Kevin Fiala and Carson Soucy but blatant thuggery just warrants a fine.  It makes zero sense.

The Minnesota Wild are coming off a hard fought 3-2 overtime loss to Vegas in what was a very spirited series.  Meanwhile the Anaheim Ducks are showing plenty of fight as well as they battled the St. Louis Blues to a 3-2 shootout victory.  So even though they may be last in the Honda West Division, they are playing with pride and the want to impress team management to justify holding a roster spot for them next season.

Young players like Jamie Drysdale, Trevor Zegras, Max Jones, Troy Terry, Sam Steel and Max Comtois want the Ducks’ management to believe the future is bright.  Like the Wild, the Ducks stuck with older players perhaps a little too long and eventually they got older and faded and with it so did the team.

One of those players passing the torch is former Spring Lake Park and Minnesota State star David Backes who got a standing ovation and an emotional video tribute from his former club in the St. Louis Blues.  For as hard-nosed as Backes was on the ice, he has been very kind and compassionate off of it as he and his wife are involved in a variety of various charities including ones that support institutions like the Humane Society.  Another player who has accepted a lesser role is Ducks’ captain Ryan Getzlaf.  He’s anchoring the 3rd line now, and is just 18 points from having a 1,000 in his 16-year NHL career.

The Minnesota Wild are scoring more lately, but they’re also giving up more goals too.  Scoring in the playoffs has often been the theme in their many 1-and-done flame outs over the years, and while they’ve played some better competition as of late you begin to wonder which trend will continue.  Will Minnesota be able to stay on its scoring pace or will they continue to be a bit leaky defensively?

One thing that will help the former is if Kevin Fiala can return from a lower body injury.  He was especially missed on the power play and late in the game as the club attempted another late-game comeback against the Golden Knights.  Rookie phenom Kirill Kaprizov continues to be the spark, but Fiala gives the team a 1-2 punch that helps bring about victories.  With the playoffs approaching, the Wild will probably air on the side of caution before returning him to action over these last few games of the regular season.  What are the keys to victory for the Minnesota Wild against Anaheim?

1. Don’t let up ~ Playing against the Ducks might make the Wild feel overconfident, especially since they have already clinched a playoff spot.  If Minnesota starts this game playing lazy and sloppy, they could find themselves in more of a fight than they expect.  Especially if the Ducks can get the 1st goal, they will start to believe they have a chance and the game will become that much more difficult.  Minnesota should approach this game the way they would against a contending team and do what they can to jump out to a lead and continue to apply pressure (and hopefully goals) to crush their spirit.

2. Keep it simple ~ Kind of similar to what I described above, but when you play against a team you feel you better than clubs sometimes have a tendency to try to be too fancy (especially when playing at home).  The team tries to set up tic-tac-toe plays and if the Ducks are hustling and battling hard it will lead to turnovers and frustration.  Minnesota has had success crashing the net, it would be wise to continue that approach and sharpen their game as much as they can as they get closer to the playoffs.

3. More attention to detail offensively ~ As I mentioned earlier in the article, goals are up for the Wild but so are goals against.  Minnesota is at its best being sharp in their own end of the ice.  It won’t hurt going against a Ducks squad (knock on wood) that isn’t all that explosive offensively but the Wild would like to tighten up in the defensive side of the game.

What do you think will be the keys to a victory for the Wild against the Ducks tonight?   Tell us on Twitter at @CreaseAndAssist!