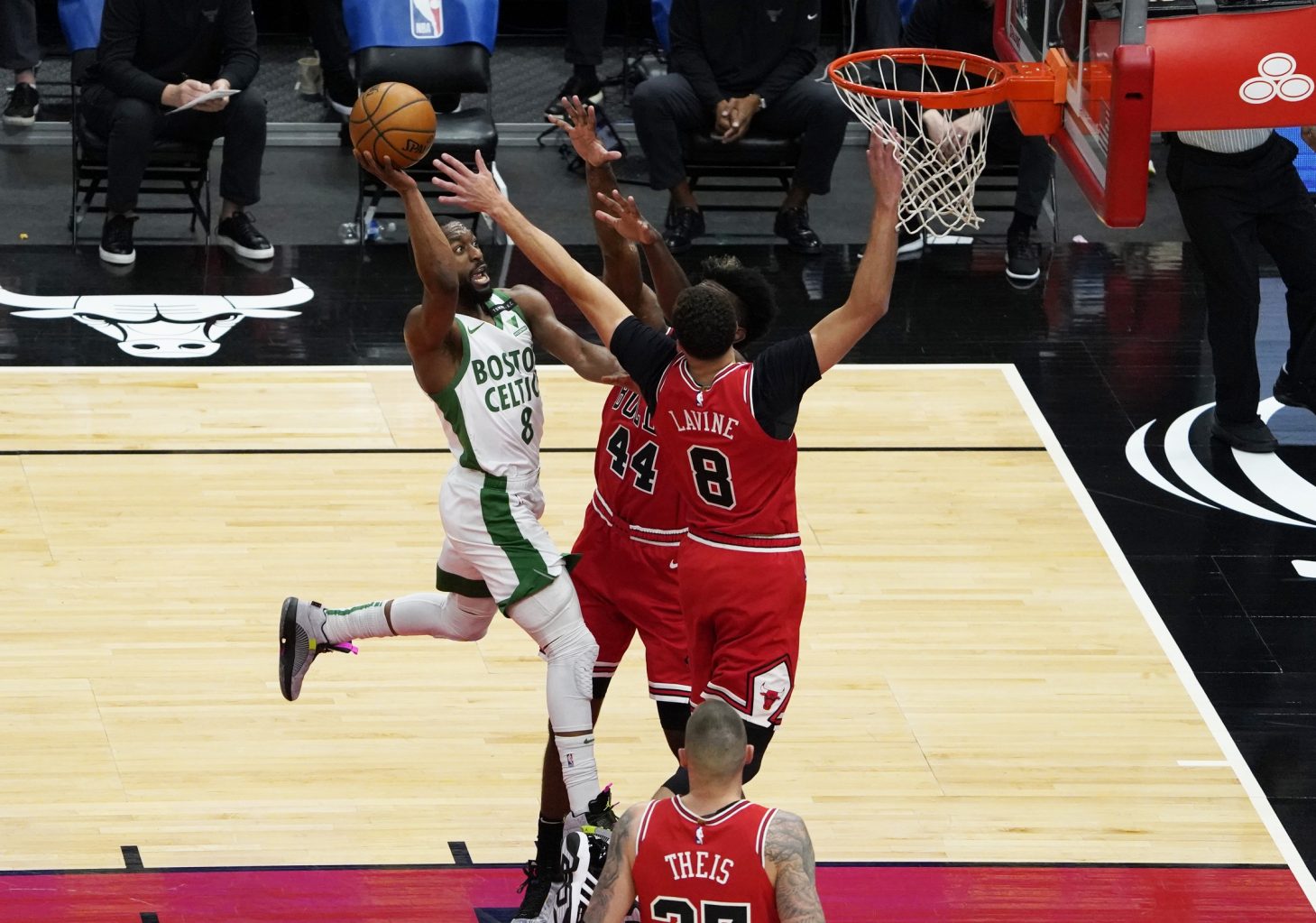 It didn’t begin looking like a rout. The teams traded leads through a mostly evenly matched Q1. Kemba Walker (33-4-3-1-1!) and Evan Fournier (17-6-3-1-1) led a respectable offensive charge, but the Bulls’ more well-rounded attack gave them a 30-28 advantage after 12 minutes. In the second quarter, things got dicier for the Celtics’ second unit, with Jabari Parker not infrequently creating difficulties for his own team. But it certainly wasn’t him alone: Defense went full leak-like-a-sieve and the offense went ice cold as well, with Zach LaVine, Nicola Vucevic and the rest of the Bulls taking advantage to build a 60-46 halftime lead.

Chicago fell into a semi-funk to start the second half, but this didn’t galvanize Boston to get out of theirs. The home team did well enough—and the Cs had enough problems on both ends of the floor—that things began to seem like a foregone conclusion.

Down 20 at the start of Q4, Kemba decided “F**k it, I’ll do it live,” and whipped enough spirit into the Cs to make it interesting. But with folks like Coby White playing like superstars and Boston asleep more often than not, it wasn’t long before the comeback hopes were brutally squashed.

Clips, jokes and frustrated analysis below:

knocks down the 3️⃣ pic.twitter.com/B7cDChXmRl

Folks weren’t so happy with the quarter’s waning minutes, though:

Vucevic has 2 made baskets and 5 assists, giving him a direct role in 7 of Chicago's 8 made field goals so far

This game has weird energy. Not good, nut not bad either. Just weird.

Teams absolutely love making tough shots against the Celtics, it's their favorite thing to do

It's been some tough minutes for Jabari Parker, who just airballed a 3-pointer. #Celtics #Bulls

Here's a video of the play. Tatum held out his hands like what are you doing man. pic.twitter.com/McM6879ZLy

Tristan wasn’t exactly so hot either:

Thompson going for is offense like this is just too much. That's not going to lead to anything good

But it was a lapse by the team as a whole, as noted above. I mean, look at this nonsense:

Bulls had a 130.4 offensive rating during that half even while shooting just 41.2 percent from the field, per @cleantheglass. Had a huge offensive rebound rate and hit 11 3-pointers.

Returning briefly to Parker, he did have this neato dunk, I guess:

When Jabari is around WATCH YOUR HEAD #Celtics Rewind presented by @tmobile pic.twitter.com/GICllxcrzE

Good to be reminded the team is as frustrated as fans are:

Fournier picks up a technical foul for throwing the ball off the stanchion. Think he was just mad at himself, but they'll get you for that these days.

The general vibes were more somnambulistic.

My analysis: not great https://t.co/V172jnvyPc

In an otherwise gross game for the Celtics, Kemba Walker has a season high of 33 points. With 7:22 still left in this one, he now has 143 total points over his last five outings. He has matched or exceeded his previous season high three times during this stretch.

Grant Williams is locked and loaded from 3 to cut the lead to single digits #Celtics Rewind presented by @tmobile pic.twitter.com/gYBenXrZpq

But it wasn’t enough, so they’re stuck.

Disappointing loss for the Celtics, as the Bulls rout them while playing on the second night. Boston is likely to be a game behind Miami going into a massive two-game showdown with the Heat in Boston Sunday and Tuesday. Celtics need one of the two to get the tiebreaker over them.