Now effectively, there is no difference between 4th and 5th seed this season, given the near total absence of home-court advantage, so the C’s are basically one game back from an optimal first round matchup.

However, if the C’s remain in the sixth spot, they would face the Bucks in the first round, and that’s not necessarily the end of the world. The C’s have played the Bucks well this season, taking two of three, without a healthy lineup.

I think there’s a realistic shot for the C’s to move up–the Knicks have a brutal schedule coming up: They’re facing the Suns, Clippers, Lakers, Spurs and Hornets, all playoff teams.

However, if the C’s move up, it’s likely that the Hawks will move up as well. Their schedule is comparable to the Celtics’, but where Boston has two games against Miami, they have two games against Washington, also a playoff team, or more accurately, a play-in (probably, they’re three games up on Chicago with five to go), but a worse one.

I think landing the five seed is a reasonable yardstick for the C’s regular season. With all the injuries and COVID-related struggles the team has had, it is, frankly, an accomplishment that sensible people should applaud.

I mean, we’re headed into tonight’s game and the C’s are once again down multiple players. Jaylen Brown is still out with an ankle sprain, Rob Williams is ‘questionable’ with turf toe, while Thompson (muscle strain) and Langford (concussion protocol) are listed as ‘probable.’

“There’s a play-in tournament and we’ve known about it from the beginning of the year. This is what it is. It doesn’t really do any good to voice my opinion on it. There’s some good and bad stuff of it.”

See what I mean about Danny Ainge’s habit of making anodyne comments about NBA actions?

The argument that Luka Doncic makes, “You play 72 games to get into the playoffs, then maybe you lose two in a row and you’re out of the playoffs. So I don’t see the point of that,” can be used to argue against the NBA’s established policy of admitting over half the league to the playoffs each year.

Yet, the NBA is more than willing to allow such things to happen because more playoff teams means more games and more games means more revenue, and more revenue ultimately means higher player salaries, so it’s not like these expanded playoffs harm players. Au contraire, and with this season being an eyes-open money grab, the play-in will likely be everything the NBA hopes it will be: A source of a bit more advertising revenue.

So suck it up, buttercup.

And that goes especially for LeBron James, who was in favor of the play-in tournament… until his team ended up down in play-in territory.

Finally: This may have been Brad’s best year as a coach

Okay, for starters, I don’t fully believe this myself, hence the qualifier in the clause. However, I’m going to make this case because I have seen altogether too many people calling for Brad’s head.

So here’s the basis: 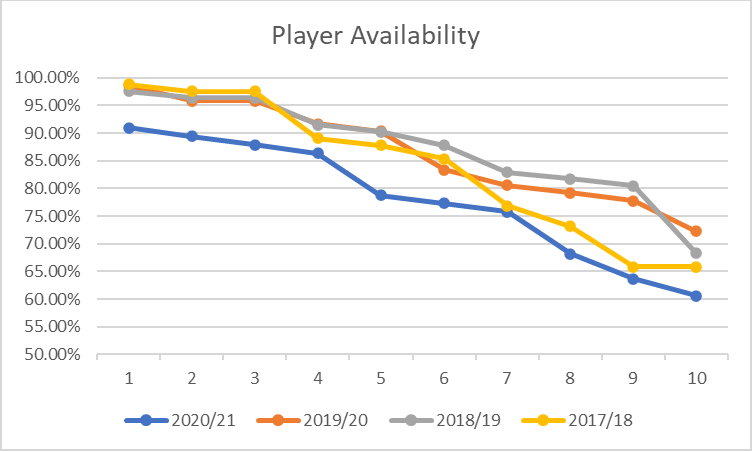 Now do you want to see an even uglier graph? 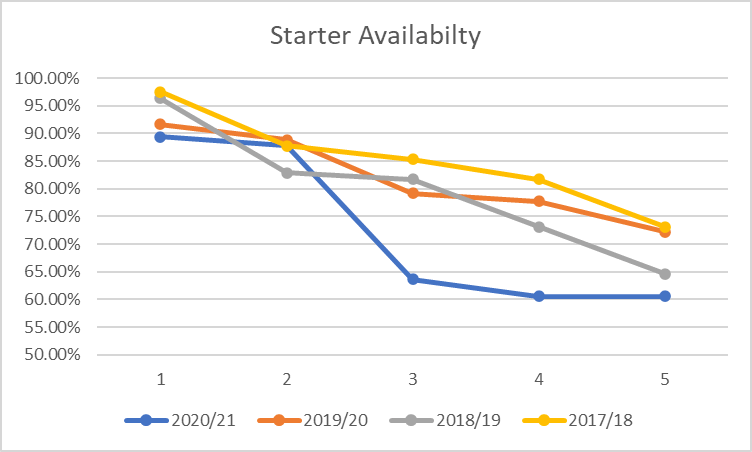 That chart shows Boston’s top five starters as a percentage of all games. So, for instance, Jayson Tatum is Boston’s top starter for the season, starting 89.39% of the team’s games. Note that at nearly every spot, this season’s top starters have been available for fewer games than any other season.

But what’s striking about this chart is the enormous drop-off from two to three?

That’s how badly injuries and illnesses have affected the C’s starting lineup this season. After Tatum and Brown, no other starter has been available for even two-thirds of the C’s games.

So you can yammer away all you want about how Brad has “lost” the team, or whatever, but this is by far and away the most amount of adversity the team has faced since Stevens was hired, and rather than splinter, the way the team did in 2018/19, the team has stuck together.