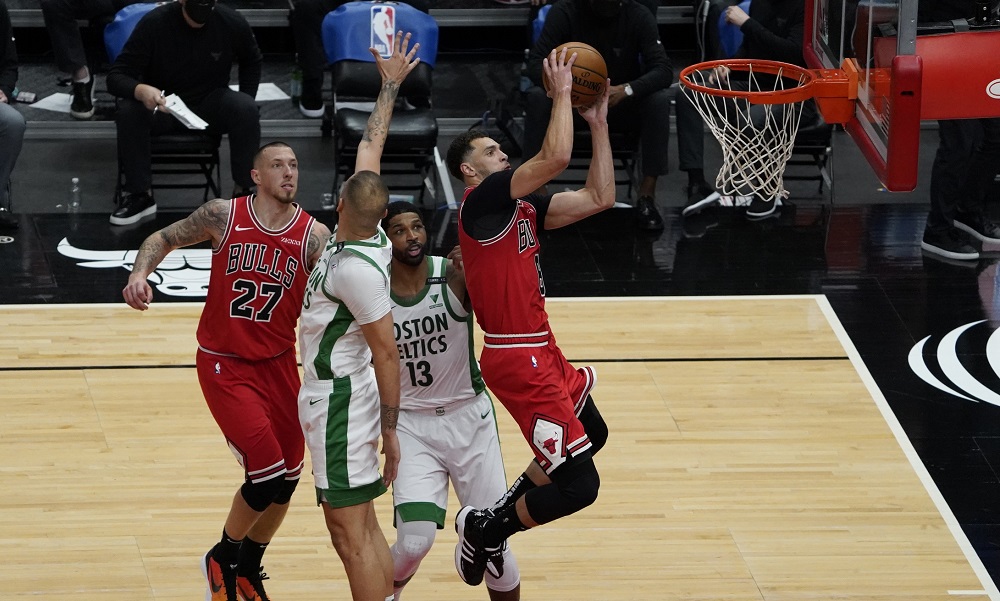 The Bulls were the ones playing on the second night of a back-to-back, but it was the C’s who looked sloppy on both ends of the court. They entered the half down 14 points and were unable to recover as Chicago was victorious for the second straight matchup, 121-99. […]

It was an off night for Tatum to say the least as the All-Star forward shot just 3 for 15 from the field and 0 for 7 from 3-point range. He finished with only nine points, and while Kemba Walker and Evan Fournier did what they could to keep the C’s in it, the rest of the supporting cast struggled throughout.

Marcus Smart was 2 for 7 from the field and 0 for 4 from 3. He finished with four points and was a -19 on the night. Outside of Grant Williams’ nine points, the Celtics bench was a non-factor.

Kemba Walker led the Celtics with a season-high 33 points, including 6-for-13 on 3-pointers. Evan Fournier added 17 points on 7-for-11 shooting as he’s heated up of late. […]

It wasn’t an offensive masterpiece from either team Friday, but the Bulls buried their 3s. Chicago had more 3s than 2s at halftime and shot 18-for-40 (45%) overall from behind the line Friday. The Bulls were just 25-for-59 on twos, but it didn’t matter as they hit a bulk of their long-range shots, whether they were wide open or contested. The Celtics finished just 11-for-39 on 3-pointers.

A week ago, after Jayson Tatum’s 60 points led the outrageous comeback win over San Antonio, I wrote a recap and posted it to Facebook with the suggestion that “the Celtics … possibly reached the turning point to salvage this mess of a season.”

A commenter responded: “Stop with the turning point crap. What’s this, the 4th time this year this is the ‘turning point’? Lol.”

And I have to admit, he was right. All season, whenever it’s appeared the Cs were figuring it out, they’ve turned in clunkers to stop their own momentum. They beat the Clippers and Nuggets twice but lost to the Kings and Pistons twice. They won six straight, including three out West, then dropped four of five. They blew out the crippled Magic on Wednesday but lost to the 28-39, 11th-place Bulls for the second time in three weeks.

2021 Celtics when they play well in one game then immediately play badly the next: pic.twitter.com/CcgPQuQYSU

As we all know, there are factors beyond the Celtics’ control. The short off-season due to last year’s deep playoff run, the effects of Covid-19, the non-stop merry-go-round of injuries, the absence of the normal home-court advantage in the Garden.

But the Celtics can control their intensity and effort; they can control playing defense; they can control if they attack the rim or settle for threes over and over, even when those shots aren’t falling. And too often this season, they’ve not gotten it done in these categories.

It all boils down to this: The Celtics, if not completely whole, are a bad team. They have players who are good in certain roles, but the instant they try to step up and fill a bigger role, they’re not very good. When they’re whole, they can be amazing.

No one is capable of doing any more than their assigned job. It’s a big rock balancing act this season.

So if they have a full team when the playoffs start, then maybe there’s some noise that can be made. If they don’t, then it’s early vacations for everyone.

Related – Boston.com: 3 takeaways as Bulls pull away from Celtics, who drop costly loss in standings  |  Globe: Kemba Walker scores season-high 33 points but it wasn’t enough, and other observations from Celtics’ loss at Bulls  |  Herald:    |  MassLive: How the Boston Celtics tried to counter the Bulls, Nikola Vucevic, but came up short  |  Boston Sports Journal: Coby kills Boston: How the C’s let White get loose for Steph Curry-like night

On Page 2: Rob’s toe and the dreaded play-in

We got the bad news shortly before last night’s tip:

#NEBHInjuryReport update:
Robert Williams is out tonight with turf toe, says Coach Stevens. "He’s meeting with specialists and figuring out the best method of attack … I don’t know what his availability will be like any time in the next week.”

Given that the Celtics are 10-2 when Rob starts, his absence – which potentially will last a while – is a real setback. And the timing is especially terrible ahead of the two crucial games with Miami.

It was so bad Friday that Celtics coach Brad Stevens opted for Tacko Fall in search of answers and the 7-foot-5-inch project looked overwhelmed. Meanwhile, the big man the Celtics relied upon most the past two years was playing for the Bulls, as Daniel Theis scored 9 points with eight rebounds against his former team.

Stevens said the organization was trying to limit Williams’s minutes to prevent injury and we now know why. He missed seven games with knee soreness, played four games, and is now out indefinitely with turf toe. The Celtics traded Theis to get under the luxury tax and because they had enough confidence in Williams to take his minutes. That gamble is backfiring so far and now the Celtics get a double dose of Miami’s Bam Adebayo, who pummeled Boston’s bigs last year in the Eastern Conference finals.

Globe: Complacent Celtics return to old habits in another loss to Bulls

…with Robert Williams nursing a toe injury late in the season, the Celtics have more reason than ever to regret their Theis trade and their failure to replace him with a similar player. When NBA teams mind dollars, those teams don’t always make sense. One-and-a-half months after moving Theis largely to dip under the luxury tax, the Celtics are dealing with a wobbly center situation as they desperately try to escape the play-in tournament.

The Athletic: Boston Celtics, down to 1 healthy center, routed by Chicago in key game

With only five games left, the Celtics sure could use two wins over Miami. Otherwise, facing the play-in tournament becomes a strong possibility. Because we keep it real here at Red’s Army, we are bravely presenting the play-in format below (unless this is our attempt at a reverse jinx, heh heh).

Game 1: The No. 7 team in the standings by winning percentage will host the No. 8 team, with the winner earning the No. 7 seed in the playoffs. The losing team gets another chance in Game 3.

Game 2: The No. 9 team will host the No. 10 team, with the winner moving on to Game 3. The loser is eliminated and enters the NBA draft lottery.

ESPN: How does the NBA play-in tournament work? Dates, projections and rules explained

So the outcome would be a) win one or two play-in games and have to face either the Sixers, Bucks or Nets in the first-round, or b) lose and end up in the draft lottery, the season in ruins. Neither is an encouraging prospect, not to mention we don’t know which Celtics team will show up on a given night.

Tommy Heinsohn Day will mark Tommy’s outstanding legacy as a Boston Celtics player, coach, and broadcaster. The NBCUniversal Boston owned sports network, NBC Sports Boston along with the Boston Celtics will showcase Tommy Tributes on air, online, on social and digital, as well as visuals and displays throughout the TD Garden and in-arena during the Boston Celtics vs. Miami Heat game on Sunday, May 9 at 1:00 PM EST.

This is a wonderful idea, and something we all need. Tommy’s energy and zest for the Celtics have been sorely missed this season. Maybe some good karma will come from this. The best way the team can honor Tommy – the way we all know he would want most – is to beat the hell out of Pat Riley’s Heat, not just on Sunday, but Tuesday too.