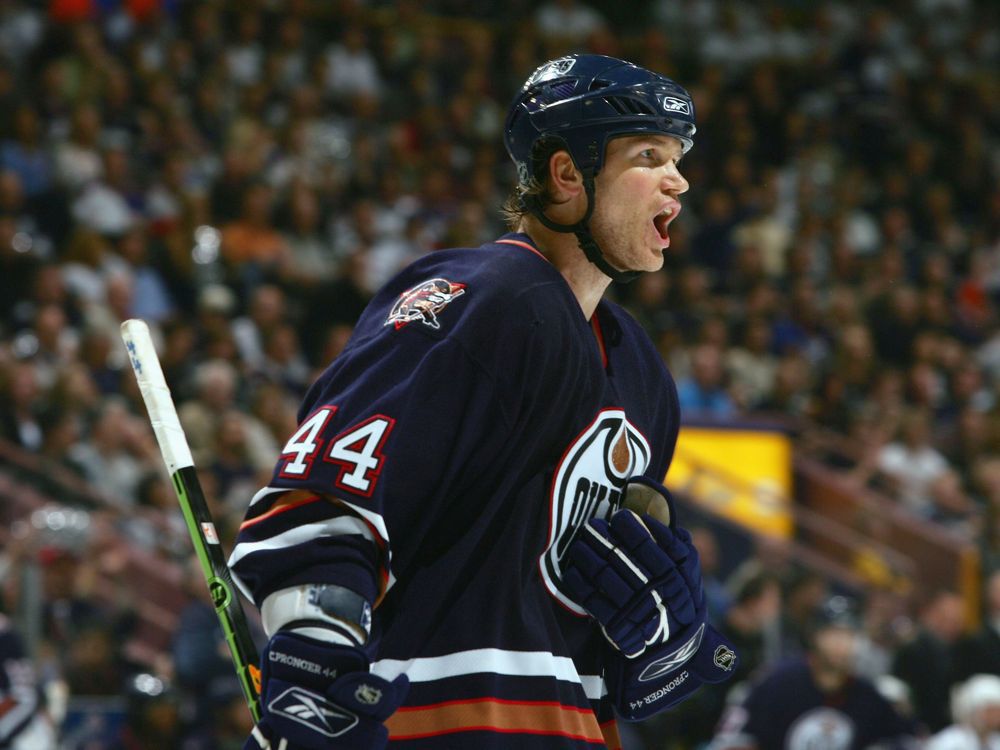 The Edmonton Oilers limped into Rexall Place on May 10th, 2006, trailing the San Jose Sharks 2-0 in their Western Conference Semifinal series. Edmonton battled hard, but struggled to create any kind of offense in the first two games against the Sharks. The Oilers managed just a pair of goals in two 2-1 defeats, and now had their backs firmly against the wall.

Failure to win in Game 3 almost certainly would have cemented San Jose’s spot in the Western Conference Final for the second season in a row.

The Oilers got going early in this game, using their second powerplay goal of the series to open the scoring at 10:04 of the opening period. Raffi Torres, who delivered a huge hit on Milan Michalek in Game 2, fed Marc-Andre Bergeron at the blueline. Bergeron settled the puck, then loaded the gun and blasted home his first of the playoffs to send Rexall Place into a frenzy.

Edmonton took the 1-0 lead into the room, but faced a blitz in the second period. The Sharks wasted no time scoring in the middle frame, tying the contest just 1:19 in. Josh Gorges fired a puck on goal that was stopped by Dwayne Roloson, but Patrick Marleau corralled the rebound and buried his ninth of the playoffs.

Just over eight minutes later, the Sharks took their first lead of the night. Joe Thornton found a loose puck in the corner that was kicked free by Jonathan Cheechoo off the wall. Thornton quickly looked up and fired a pass into the slot for the on-coming Patrick Rissmiller. Rissmiller’s quick release beat Roloson clean at 9:30, and gave the Sharks a 2-1 lead heading into the final period of play.

With their season on the line, the Oilers buckled down. Torres, who had come alive over the last 60 minutes of play, struck.

Jarret Stoll found Torres in stride in the neutral zone. Torres gained the offensive zone with speed and snapped a heavy shot over the glove of Toskala to even the score at 2-2 13:13 into the third period. Rexall erupted, and momentum was finally on Edmonton’s side.

For the first time in the series, overtime was required.

The first overtime was relatively quiet, while the second overtime featured one glorious chance for the visitors. Thornton got in behind the Edmonton defense with Cheechoo coming down the wing.

Thornton hit him with a perfect pass, while the ‘Rocket’ Richard Trophy winner let a quick shot go that seemed destined to end the game. Roloson, somehow, slid across and snagged the puck with his glove, keeping Edmonton alive.

Finally, in the third overtime, Edmonton put the nail in the coffin. Ales Hemsky found Ryan Smyth behind the Sharks goal with a bank pass off the wall. Smyth, who was hit in the face earlier in the game by a clearing attempt, tried to wrap the puck around but was denied by Toskala.

The rebound bounced into the low-slot, right to Shawn Horcoff. Before he could even realize it, Horcoff’s instincts took over, and he beat Toskala cleanly at 2:24 to give Edmonton a massive victory.

The Oilers fought. They persevered. Now, they only trailed in the series 2-1, and would return two nights later to a wild Rexall Place with a chance to even the series.

The full CBC broadcast of Game 3, thanks to Sportsnet, can be seen here.