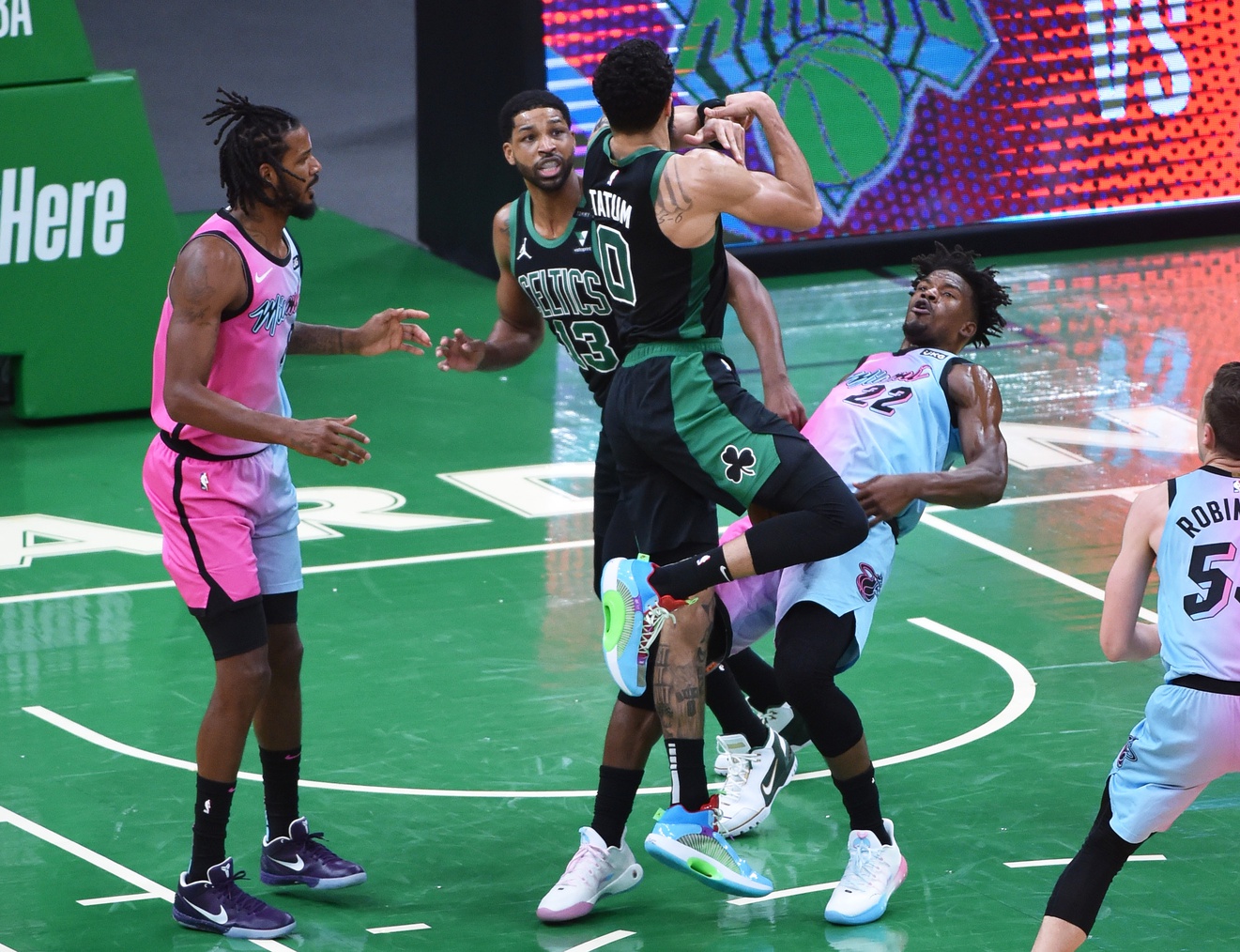 We saw both the best and worst of the Celtics in the first throwdown of their two-game series against the Miami Heat. It was somewhat like the recent contest against the Spurs…except unlike that one, the Cs couldn’t crawl out from under the giant boulder they’d let fall on them.

1. A hellhole of historic proportions

It’s hard to really recreate how utterly demoralizing the first half of this game felt as it was happening. Instead, it’s best to look at it through a broader prism:

Plenty of teams in this era played fast, almost none faster than Bill Russell’s Celtics under Red Auerbach. So while large point totals were given up in game halves in years like 1963, it didn’t necessarily matter.

In the modern era, you, uhhhhhhhh, can’t do that. I’m not sure Boston’s defense has ever looked worse than it did during the first half of this game. While Jaylen Brown’s absence and Rob Williams not being 100% (he left after the first half due to aggravation of his toe injury) can be taken into account, it clearly wasn’t just that. The pressure—some of it BS media noise, but a lot of it very much deserved—is weighing on these Celtics and they’re not responding well.

2. Making it easy for the Heat

The Heat are a good team, and not unlike the Celtics at their best, they often function most effectively when underestimated. Some of this is Erik Spoelstra, who still coaches like he has a chip on his shoulder even though he’s won two titles, some is the annoying-but-kinda-accurate “culture” bulls**t that Pat Riley has pimped to the NBA media for over 20 years and the rest is the leadership of Jimmy Butler. But they’re far from immortal. They wouldn’t be a sixth seed still in danger of falling into the play-in if they were some unstoppable force.

In a post on CelticsBlog, Adam Taylor laid out some of the ways the Cs could take advantage of Miami’s shortcomings: their leisurely pace, lack of transition play, weak rebounding and more. Boston proceeded to do, like, absolutely none of that in about 70% of this game. Instead, they let the Heat do well in transition and on the boards. Until the last quarter, they generally defended Miami with godawful anemia. It just sucked, man.

3. What do stats even mean anymore

Don’t worry, this isn’t gonna be one of those old-man-yells-at-cloud, anti-analytics rants. (If you wanted that, well…sorry? I guess?)

The point I’m more trying to make is that as a fan, the juxtaposition between knowing the objective truth of a stat and finding value in its meaning is a difficult gulf to cross. Consider this:

It is unfathomable that the Celtics have the best offensive rating in the NBA since the All-Star break lol https://t.co/cstcrEmRLO

Not even all that surprising, given the number of times the Cs have saved their own bacon in second halves. It speaks to the talent and potential Boston has—and the various ways in which they’ve failed to capitalize on it in the win-loss record.

We saw that on display during this game, in Technicolor. Boston spent much of the contest playing some of the worst NBA basketball I can remember from this season, and the rest of it executing at a very high level. The latter, obviously, doesn’t matter much when the former is the majority of what we see, and the final score is a loss. Process over results only means so much when there are abjectly bad results at the worst possible time.

We know full well that a healthy Cs team wins at least a good share of the games that they lost this season while they were at reduced strength.

Some of that ideal version of the Celtics was on display in the second half of this game. Jayson Tatum heated up radically to reach a 29-5-6-1-2 line, while Kemba Walker (who led the team in minutes) had a respectable 18-2-6-2 and made up for imperfect shooting with drives that got him to the line. Evan Fournier had his best offensive game yet as a Celtic, shooting the rubber off the ball for 30 while also racking up dimes (8 of ’em) in a way that showcased what he could still offer as a full-time member of the squad next year. Last but not least, after a listless showing on Friday night, Marcus Smart was up for this one. At times he was the squad’s only notable source of life.

5. Positive thing no. 2—Hope for the future

For a lot of this year I’ve called Aaron Nesmith a cipher, or something along those lines.

Aaron Nesmith being legitimately good over the past couple of weeks has been by far the most encouraging development for the Cs moving forward.

I’m glad to have been wrong about that. By no means is Nesmith fully formed, or anywhere near done with his development. But it’s patently clear now that he’s capable of being more than the one-dimensional shooter he was typecast as during the draft. Given that the best course of action for the Cs increasingly looks like planning for next year, that potential is what you want to see.