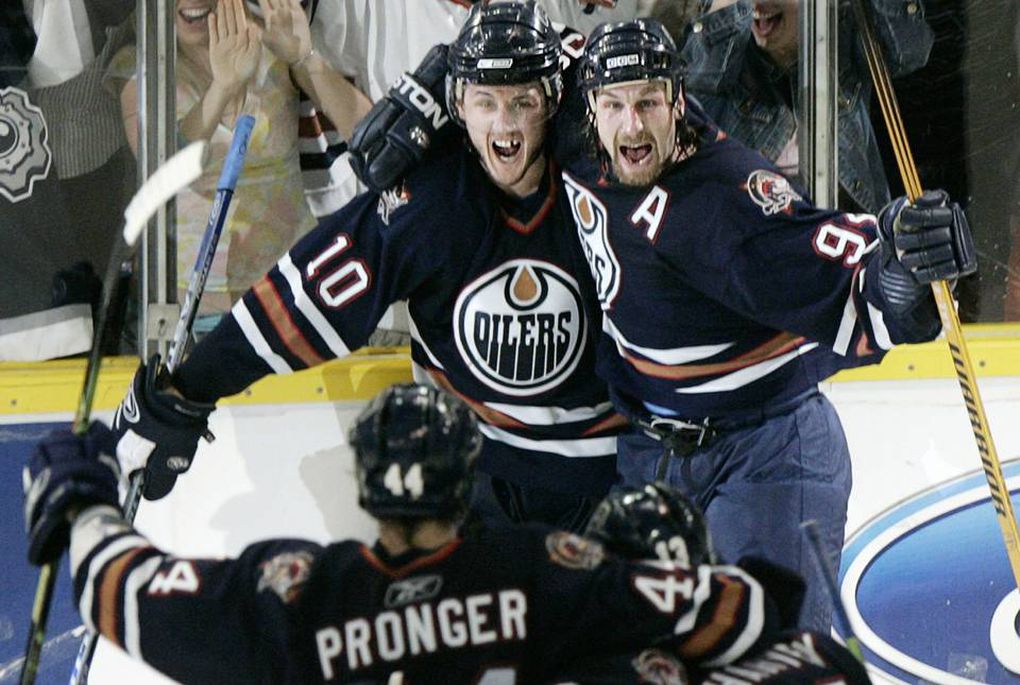 Two nights ago, Shawn Horcoff was the hero in a marathon game that kept the playoff dream alive for the Edmonton Oilers. Now trailing the San Jose Sharks 2-1 in their Western Conference Semifinal series, the Oilers had life. On this night 15 years ago, they returned to Rexall Place for Game 4 with a chance to completely rip the momentum away from an extremely talented San Jose group.

Things didn’t exactly start out well for Edmonton, however. The Sharks wasted no time getting on the board, breaking the ice just 3:47 into the contest. Nils Ekman made a nice move around an Oilers defender and threaded a pass to a streaking Joe Thornton, who tapped in his second of the playoffs to get the Sharks off and running.

San Jose tacked on the insurance marker just over three minutes later. This time, it was Ekman who found the back of the net. Patrick Marleau won a faceoff in the Edmonton end that bounced right to Ekman in front of the goal. He snapped a quick shot by Dwayne Roloson at 6:40 of the period to give the Sharks a 2-0 lead.

Just like in the series, however, the Oilers did not quit. Jason Smith took a pass from Chris Pronger at the far point and settled the puck briefly before stepping into a big slap shot with just over seven minutes to play. The shot clipped Horcoff, changed direction and beat Vessa Toskala to get Edmonton on the board at 12:55.

The Oilers stopped the bleeding, and got to the room down just 2-1 after a nightmare start. Unfortunately, there was still blood in the water, and the Sharks sniffed it out.

Thornton took the puck deep into the Edmonton end, with Chris Pronger draped all over him. Thornton was able to shed Pronger for a second behind the Edmonton goal, and in that moment he placed a perfect pass onto the stick of Jonathan Cheechoo. Unlike in Game 3, Roloson couldn’t get there and Cheechoo had his first of the series and third of the playoffs at 9:02 of the second period.

With half the game gone by and the Sharks leading 3-1, things looked bleak in Northern Alberta.

All it takes is bounce to change the entire complexion of a game and a series. Edmonton got two bounces in quick succession.

First, Ethan Moreau took a shot that Toskala steered to the wall, but it bounced right to Michael Peca. Peca quickly collected the puck and, while still in stride, banked it by Toskala at 12:28 to get the Oilers within one. Peca’s first of the playoffs broke the dam.

Sergei Samsonov had been quiet in this series, and took a hooking penalty at 13:29 that seemed to kill the momentum. Again, though, bounces can change things.

Ekman tried to bank a shot from a bad angle off of Roloson and into the net, but the puck missed and came all the way out towards center. At this exact moment, Samsonov was set to be freed from the penalty box. The puck continued to roll into the Sharks zone, so Toskala came out to play it.

He beat Samsonov to the puck, but in his attempt to clear it he put the puck right into the Edmonton forward. Samsonov kept following the puck, and found himself in the slot with the puck on his stick and no goalie or defenseman to be found.

Samsonov gently put the puck in the net at 15:35 for his third of the playoffs, and just like that the game was tied 3-3.

Even though the score was even entering the third period, this game was over. The Oilers had all of the momentum, and the Sharks could not stop them. Edmonton scored three times in the third period to put this game away, scoring five unanswered to stun the Sharks.

First it was Smith, who took a feed from Samsonov and dangled his way to his first goal of the postseason at 2:57 of the third period. Then, it was the top line. Ryan Smyth gained the offensive zone with speed and wired a pass to Ales Hemsky, who put home his third of the playoffs in close to make it a 5-3 game at 8:19.

Finally, on a two-skater advantage late, Jarret Stoll blasted home his third of the playoffs via the one-timer at 14:00.

Edmonton’s 6-3 victory tied the series at 2-2, and turned all of the momentum in Edmonton’s favor. Now, the Oilers were off to Northern California with a chance to catch a wounded Sharks team that was just trying to lick its wounds after a shocking 72 hours in Alberta.