If you had told me back in 2015 that in about five years there would be a global pandemic, and that nobody would leave their homes for the better part of a year, and I wasn’t going to go to a baseball game for 592 days, and my first game back I would see Matt Harvey starting against the Mets for the Baltimore Orioles, I would have told you …

But here we are, May 12th, 2021. We’re just returning to ballparks. 80% of the seats at Citi Field have plastic ties around them to keep people from sitting in them. And Matt Harvey is Dom Smith, Dominic an Oriole. To those who wonder what life would be like in an alternate universe, I would argue that we are in the alternate universe.

The Dark Knight rises. His fastball, not so much. (Metstradamus)

Harvey received a nice ovation when he took the mound for the bottom of the first. The guy shut down the ever powerful Scott Boras so that he could blow by his innings limit to pitch in the World Series for the Mets, knowing full well it could sabotage his career. Just by that alone, I don’t know why cheering him or booing him was even a question. (Oh wait, it was a question because all the argument shows need content. Silly me.) I’m glad the crowd at Citi today made the choice that it did.

As for the choice that I made, I had to see what everyone was talking about with this Polar Burger. This is the collaboration between Pete Alonso and Chef Jason Eksterowicz, and it is true to its name. Whereas the Keith Burger gave you the sharpness of cheddar and the heat of jalapenos, this goes down smooth as it was the Peppermint Patty of burgers. I realize that it’s all a matter of personal tasted, but I loved the coolness of the flavors. Let’s face it, I could bathe in maple carmelized onions so they had me there. Also with smoked gouda, this goes down smooth and puts a smile on your face. I also love that onion fritters are an option as a side. It comes with “claw sauce”, which really tastes like a smooth horseradish. Yes, it’s big. And yes, there are 1640 calories in this thing, officially. (Although I’d like to call for a recount.) I feel like I burned them off successfully by walking the hour to and from the ballpark today. Whether I actually did or not is up for debate, but just let me tell myself that.

And it had lettuce, so it’s healthy. 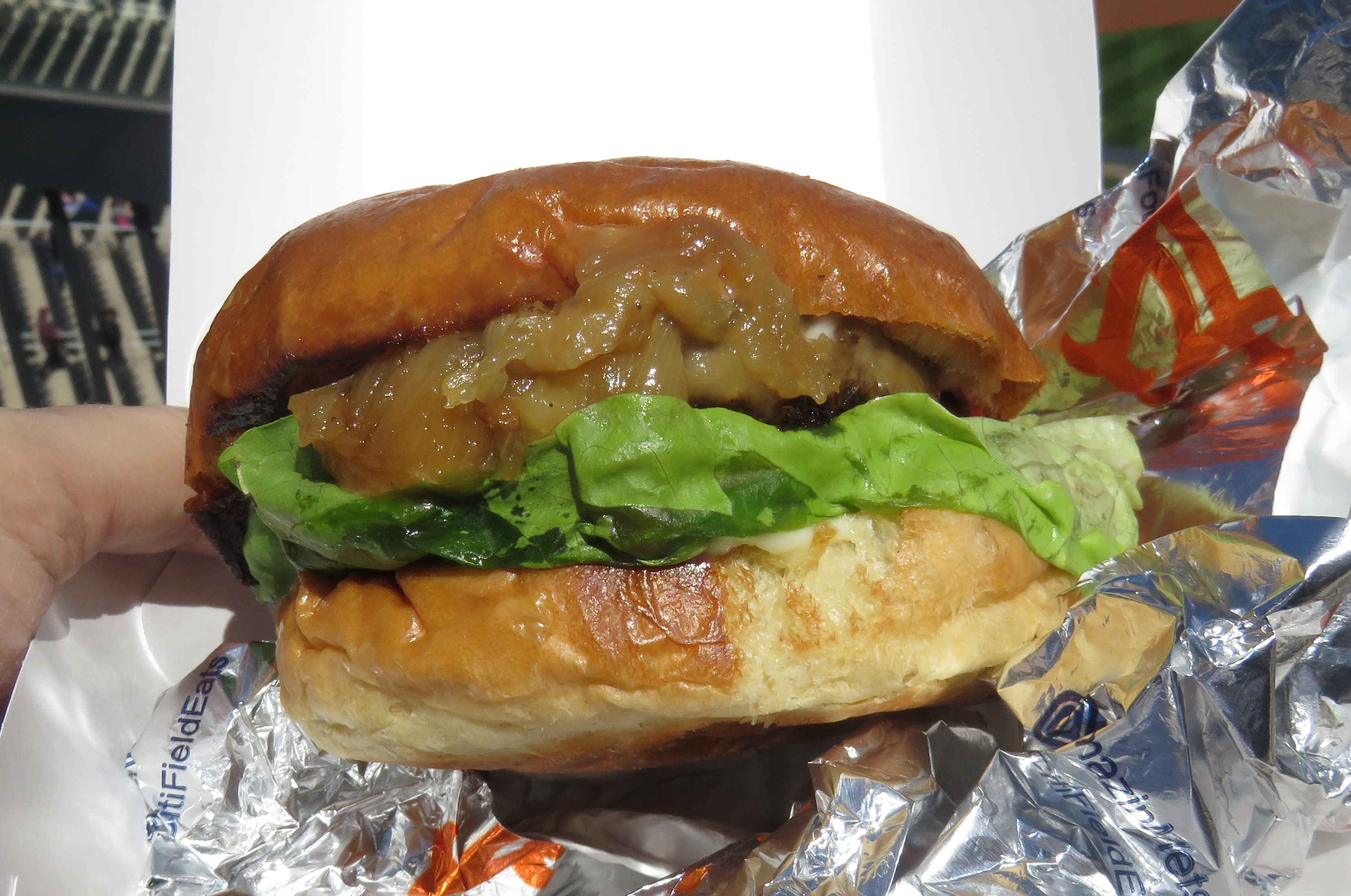 The latest in hamburger adventures at Citi Field: The Polar Burger (Metstradamus)

If we were in an alternate universe, perhaps Matt Harvey would have his own burger stand at Citi Field by now. (I’m envisioning something soaked in Jim Beam bourbon barbecue sauce … and no, I’m not being compensated for that). Maybe “Sinkers and Sliders” could have been a reference to Matt Harvey’s new pitch as he advances in his career. But in this universe, Harvey didn’t even make it out of the first turn through the order without damage. After Kevin Pillar saved extra bases in the top of the first with a leaping catch off the wall against Austin Hays, Pillar tripled in two runs in the second inning with a shot that Cedric Mullins couldn’t catch up to. Jose Peraza then singled in Pillar for a 3-0 lead. Dom Smith follwed in the third with a single to the vacated left side making it 4-0, and then you kinda knew that this game was going to trend in the same direction, especially the way Taijuan Walker was going.

The other pitcher on Harvey Day was pretty damn good. (Metstradamus)

It’s easy to forget about Walker on a day where the anticipation for Harvey was so great. But don’t forget about Walker’s day. Walker went seven innings for the second time in a row (first time he’s done that since 2015), and only gave up a run on and out while striking out four and walking three, which is inflated because from where I sat behind the plate up high, he got squeezed against Maikel Franco for his first walk. But if that’s the only thing I had to complain about today, then it’s been a good day. And it certainly has been a good day and a good season for Walker. If he keeps this up, he’ll have a burger stand too.

Harvey was hanging on by a thread in the fifth when Michael Conforto singled up the middle to make it 5-0. He had gotten away from his sinker a little bit, and throwing fastballs to Pete Alonso was a fool’s errand as he had trouble locating it, and walked Alonso in his Citi Field coda as a visitor. Again, Harvey received an ovation as he walked off the mound with no hint of any “thanks for giving up five runs” sarcasm. It was, instead, an extended thank you.

I can't remember the last time Matt Harvey was like this in an interview — poignant, reflective, honest, raw. It's clear returning to Citi Field really meant something to him, as did the fact that the fans here received him warmly. pic.twitter.com/4KpWr72hBx

“Obviously, there’s been so many ups and down here at this ballpark and this organization that I didn’t really know what to expect, and what the fans gave me out there was pretty incredible. I was holding back tears. I’m not going to lie about that. It was pretty hard holding them back. It reminded me really a lot of the good memories, and coming off the field with an ovation like that, it brought a lot back and it was very special to me, something I’ll never forget.” –Matt Harvey

I’m sure it wasn’t exactly the return Matt wanted, and there might even be some Mets fans that would have wanted a win that was slightly more dramatic. But if you’re looking for drama on a Wednesday afternoon in the middle of May, you’re probably looking in the wrong place. But there were some tense-ish moments at the end. Walker worked out of some mild trouble in the 7th after giving up a run on a ground out. The Orioles loaded the bases in the 8th off of Robert Gsellman with noted Mets killer Maikel Franco at the plate. But Peraza made a leaping grab to end the threat. Patrick Mazeika sent the crowd into a frenzy as he attempted to secure his first major league hit.

That didn’t happen. It wasn’t for lack of trying. He swung at everything with a 7-1 lead, but he flied out to center. So he’ll have to settle for his two walk off RBI fielder’s choices and his ever growing fan club:

The timeline of this universe gets stranger and stranger.

Drew Smith made his season debut, and although I didn’t see anybody wearing his jersey on Roosevelt Avenue, he ended the game drama free with a 1-2-3 ninth to secure a 7-1 victory. For me, it was a major step back to a little life normalcy with the hope that it doesn’t take another 592 days until the next in-person Mets game (and that Jacob deGrom isn’t returning to face the Mets while a member of the Nashville Athletics.) As for the team themselves, the Mets head to Tampa ready to face the defending American League champions. They’ll do so without Albert Almora Jr., who was placed on the IL with a shoulder bruise (Khalil Lee is up with the team and may very well make his debut this weekend against Tampa), and they may spend one of those games battling the Rays without Jeff McNeil and his body cramps. But they’re riding high nonetheless, rolling with a seven game winning streak and weather appropriate gear for their trip.

Yes, that includes the dog raft.