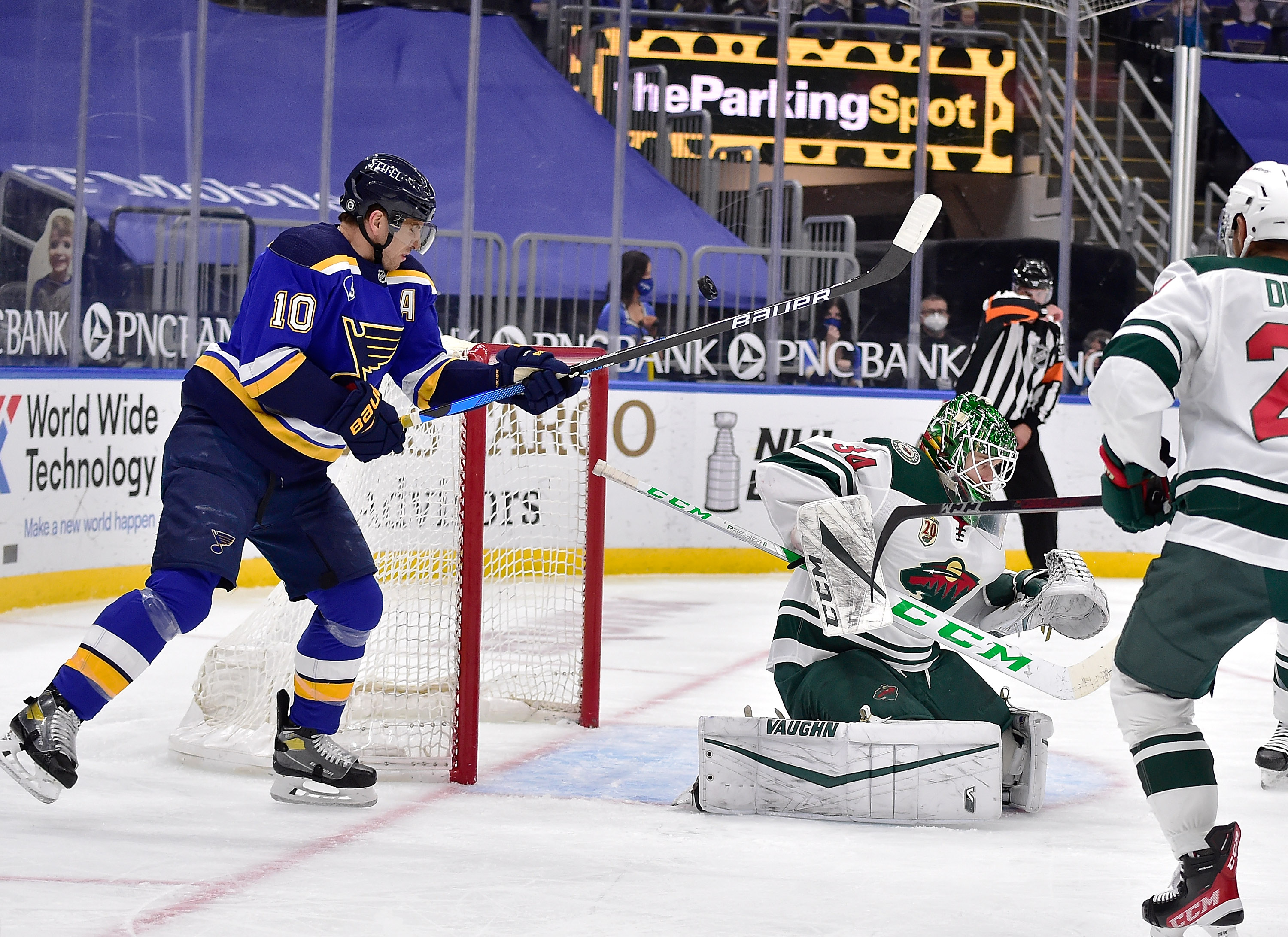 It’s amazing what a 24 hour difference can make. Last night, we both went to bed ticked off over the lack of effort put forth by the Wild. And with that lack of effort, I can’t say I was really looking forward to tonight’s game. Yet, from the very get-go, tonight was truly a different game. Let’s start with the long healthy scratch list. We haven’t seen a list like this since Minnesota was suffering with Covid-19. On tonight’s healthy scratch list, we have Kirill Kaprizov, Kevin Fiala, Mats Zucarello, Jared Spurgeon, and Jonas Brodin. It makes sense, because with the playoffs starting on Sunday, why risk any of those five to injury. And with the lack of effort last night, makes one wonder why we didn’t dress the Taxi Squad then instead of tonight. Heck, with all of these different faces, it really feels like we’re back in the heady days of Covid-19 with this team. Yet, when Minnesota returned to play after their pause, it felt like we’d be stuck in the proverbial cellar the rest of the season. Thankfully, that has not been the case. What a difference time can make, both long term and short term. I’m also not going to complain about the play in the opening period tonight. Getting goals early in the game, less than a minute apart from Nico Sturm and Ryan Suter is definitely a boon. Then of course, this wouldn’t be this season’s Minnesota Wild without a goal from none other than Marcus Foligno. I mean, if you’re not going to get goals from Kaprizov tonight, Foligno is a good substitute. Heading into the first intermission with a 3-0 lead is definitely an improvement.

Well, time is fickle. As is the Minnesota Wild. Just when you think they’ve figured out what went wrong last night, they return for the second period. I don’t know what it is about this particular period, but if they’re going to crap the bed, it will be during the second. I don’t know if it’s because they’re like “hey, we have a three goal lead, we can take it easy” or if it’s because of the long change, or what it is, but I’d rather skip the second period most nights. Tonight is definitely one of those that I wish we could have skipped. Slowly, but surely, Minnesota wasted their three goal lead. The goals would come from Zach Sanford, Brayden Schenn, and David Perron. If it wasn’t bad enough to just see the game tied, but Schenn would score a second goal, which would then give St. Louis the go-ahead goal, on the power play no less. In fact, two of St. Louis’ goal in their rally would come on the mad advantage, and both of those power play goals were scored by Schenn. Seeing how Minnesota has played tonight and last night, definitely has me concerned about the post-season, and I don’t think it really matters who the opponent will be. If the Wild play like this against either Vegas or Colorado, you can pretty much expect another one and done playoffs.

And if you thought the four goals St. Louis scored in the second was bad enough, well there’s always the third period. The Blue would go on to score three more goals, one by Perron and two by Jordan Kyrou. If there’s anything positive (and I’m being extremely sarcastic here), it’s that no one scored a hat trick tonight. That alone is a miracle, when St. Louis had not just one player with two goals, but three players with three goals. That is simply flying just a tad bit too close to the sun for my comfort level. This game was like a hockey version of A Tale of Two Cities. There were two very different games played tonight, and in the first game, the Minnesota Wild forgot they still had another 40 minutes to play after a successful first period. Again, this will not fly come the playoffs. If there’s any sort of silver lining, it appears (knock on wood) that Minnesota will be facing Vegas in the first round. since as I’m typing this, Colorado is up 4-1 on Los Angeles. While Minnesota is one of the few teams in the league that has the Golden Knights’ number, the way these past two games panned out, it will not fly come Sunday. I’m going to try to forget these two games even happened, yet they are critical to what is to come.

What did you think of the Wild’s last series against the St. Louis Blues?  Tell us on Twitter at @MNSOTA24 and @CreaseAndAssist! 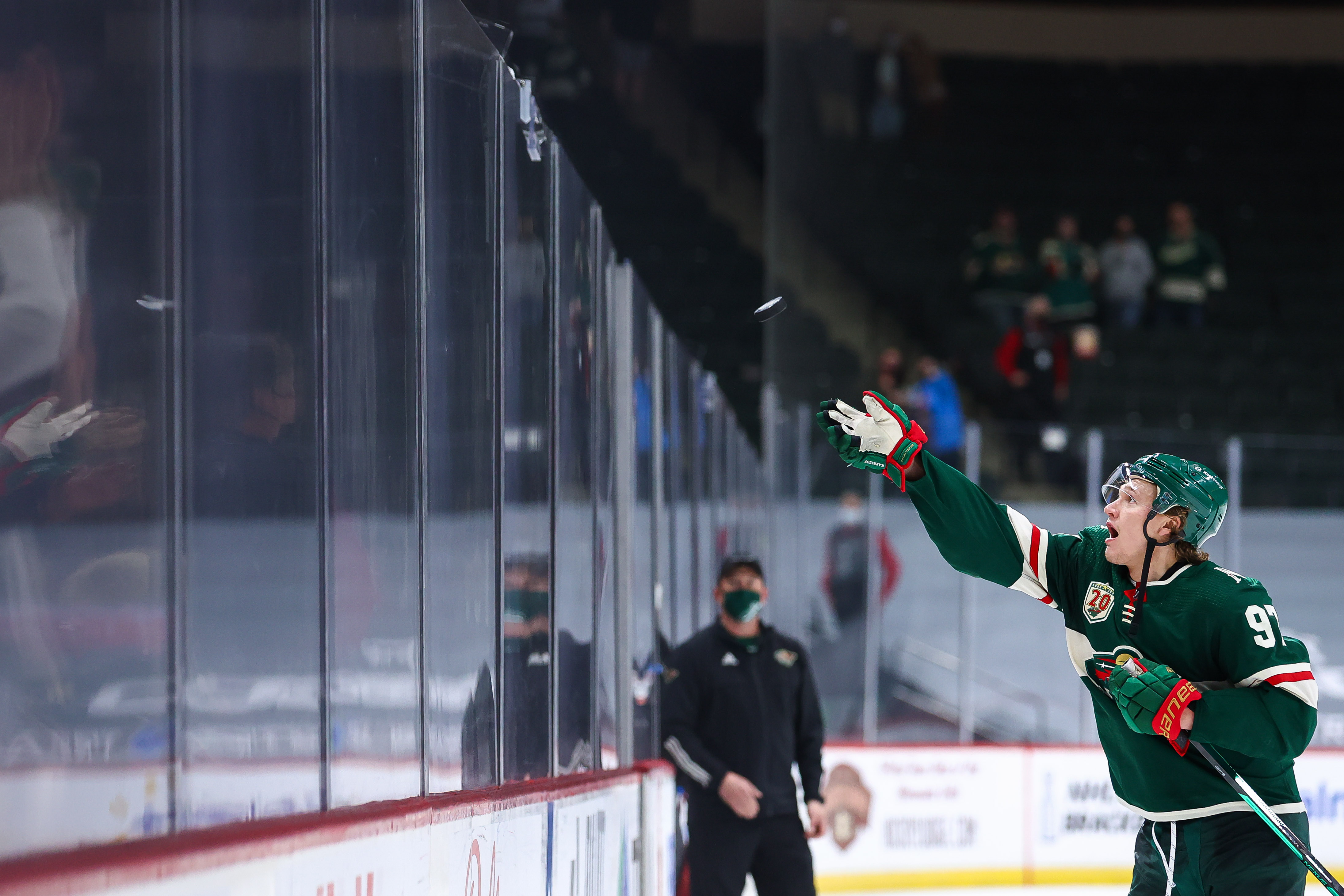 Our feature today is looking back on the 56-game blur that was the 2021 regular season. We hope you enjoy the trip down memory lane.

5. Wild bench & scratch Zach Parise ~ This may not be the most positive surprise of the season, but it certainly was eye opening to see the team bench and later scratch alternate captain Zach Parise.  Prior to this season, the organization has catered to the veteran winger’s wants but that seems to have come to an abrupt end as his struggles on the scroresheet saw him relegated farther and farther down the depth chart before becoming a healthy scratch by season’s end.  Parise’s steady decline makes one wonder what his future holds considering he has 4 more years left on his contract after this one.  Wild General Manager Bill Guerin talked about a need for a ‘change of culture’ for the organization and for many fans, seeing Parise scratched is tangible proof of that change.

4. Joel Eriksson Ek makes the most of increased opportunity ~ Starting a season or two ago, there were some fans that were hoping the 2014 1st rounder would get a bigger opportunity as people could see the roles of veterans Eric Staal and Mikko Koivu start to fade.  These fans felt that if given a chance he could reward the team with offense that seemed to elude him while being used in more of a supporting role.  That belief seems to be vindicated as Eriksson Ek had 19 goals for a career-high.  Will his breakout season cost the Wild too much to be able to afford him and some of the other promising young players due for big raises?

3. Talbot & Kahkonen stabilize the Wild’s goaltending conundrum ~ Prior to the start of this season, most guessed the Wild were going to hope free agent goaltender Cam Talbot and affable Alex Stalock would give the team the competent play to give them a chance to be competitive.  Stalock would contract Covid-19 and found himself supplanted by youngster Kaapo Kahkonen who helped buoy the Wild season before Talbot would return.  Kahkonen’s strong play would prompt the team to trade Stalock away.  Talbot would eventually be tabbed as the team’s starter, but both goalies helped the Wild rise to near the top of the Honda West division.

2. Jonas Brodin emerges as the Wild’s best defenseman ~ When the Minnesota Wild made Jared Spurgeon team captain, many felt that was recognition for his quiet, steady lead-by example style.  The new captain struggled through the early part of the season, perhaps getting used to the new role as the club’s leader.  While Spurgeon would eventually settle in and have a season that is more like what we expect, another Wild defenseman would step up and fill that void offensively in Jonas Brodin.  Brodin has always received rave reviews for his shutdown ability, but this year he’s shown a level of offensive skills that seemed to grow the more he shot the puck.  He leads all Wild defenseman with 9 goals and is 2nd in points with 23 and logs the most ice time most games averaging 22:28 a night.  Perhaps his confidence stems from the fact he controls his own destiny with the security of a no movement clause in his back pocket, whatever it is the reason, the team’s success is due in large part to the strength of its blueline.

1. Kirill Kaprizov lives up to the hype and more ~ Wild fans have had their share of disappointments when it comes to players.  I remember when people thought Mikael Granlund was going to be the organization’s savior.  While Granlund was good, he just couldn’t elevate the organization by himself.  As we waited the last 5 seasons for Kaprizov to make his North American-debut, we had seen him raise his game to meet the moment whether it be the World Junior Championships, the KHL Gagarin Cup or the Olympics.  So expectations were rather high by some fans while others felt it would be wise to be more cautious.  Instead, he shattered every Wild rookie record despite playing in an abbreviated season and from the moment he played his first shift he established himself as the club’s best player.  It appears likely he’ll win the Calder Trophy as the league’s top rookie, but he should at least be a finalist for the Hart Trophy as well (even though that one will go to Edmonton’s Connor McDavid without a doubt).  He has electrified fans and he seems to match skill, speed outstanding offensive instincts with equal aplomb without ignoring his defensive responsibilities.  He’s everything this organization has desperately wanted (or needed) and it is very likely by the end of this summer he’ll be the team’s most well-paid player too.

Iowa used a 3rd period surge to rally back from a 1-0 deficit after two periods to earn a big victory over the Texas Stars in Austin on Wednesday night.  Iowa got goals from Daemon Hunt and Nick Swaney who both registered their first goals as professionals, while Matt Boldy added an empty netter to seal a 3-1 victory.  Hunter Jones had 28 saves in the win.  Mason Shaw also had two helpers on the night.

LW – Adam Beckman (Spokane, WHL) ~ The Saksatoon-native’s abbreviated WHL season comes to an end as he was held scoreless with 3 shots on goal in Spokane’s 3-0 loss to in-state rival Seattle.  Beckman finishes the season with 17 goals, 27 points, 8 PIM’s and was a -6 in 21 games.