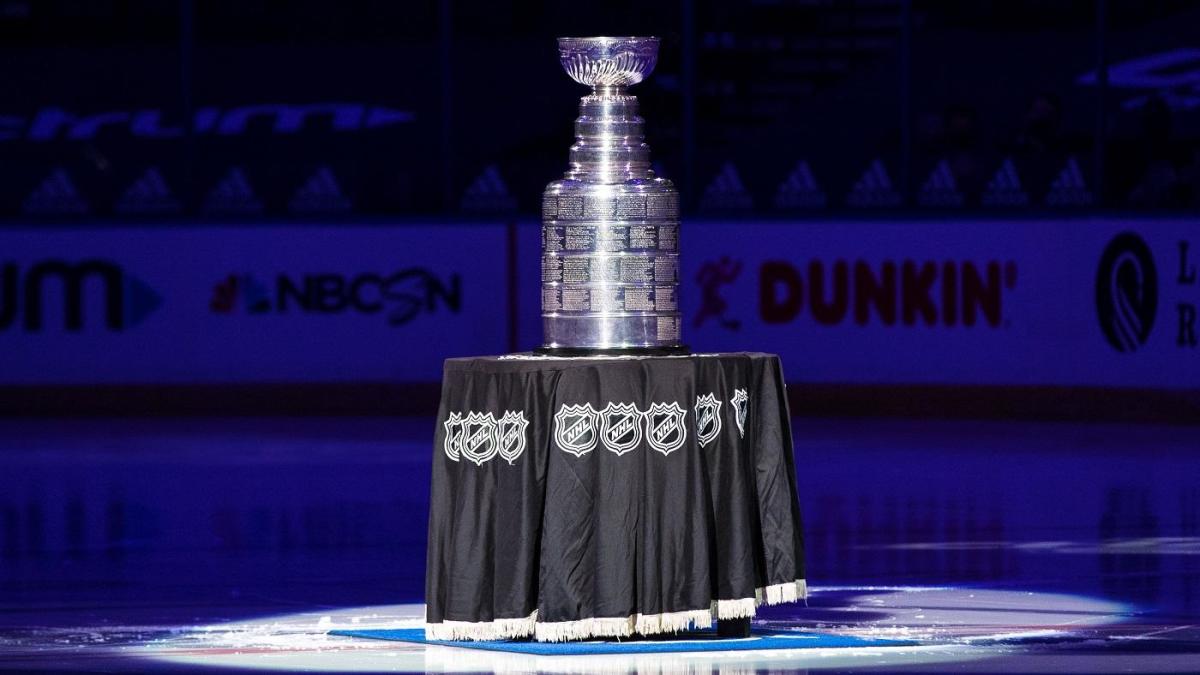 Tonight, the 2021 Stanley Cup Playoffs open up with a single game, as the Boston Bruins pay a visit to the Washington Capitals in an East Division series. Tomorrow, three more series will kick off, and by Monday night the first round will be in full swing. It’s the best time of year if you are a hockey fan.

This year, the first round opponents know each other better than maybe any other year in league history. Each team has played each other at least eight times, and in some cases (hello, North Division) nine or ten times. That means these teams don’t like each other, and the hockey should be incredible.

Of course, this time of year is also for people like me to pretend like we know a thing or two about what is going to happen. So, here are my completely useless, probably going to be wrong predictions for round 1 of the 2021 Stanley Cup Playoffs.

What a difference a season makes. Earlier this year, after Jim Rutherford stepped away, there were rumors that Sidney Crosby could be on the move this off-season. The Penguins dealt with lots of injuries, but are getting healthier and got a boost at the deadline with Jeff Carter. This team was far from a lock to make the playoffs, but somehow won the division.

The Islanders, meanwhile, feasted on teams like the Sabres, Devils and Flyers early, They limped to the finish line, however, and didn’t look great against teams like the Bruins, Capitals and Penguins. Yes, they enjoyed a nice run last summer and yes, they play a ‘playoff style’ of hockey. In the end, do they have the top end talent to beat the Penguins?

I don’t think they do. Pittsburgh has been embarrassed in each of the last two playoffs. They are playing strong hockey right now and goaltending isn’t the issue it was back in August. Combine that with an MVP-like season from Crosby, and the Penguins will be a very tough out.

The Pick – Penguins in 6

The Bruins struggled out of the gate this season. They greatly missed Torey Krug and Zdeno Chara, and they had nothing offensively behind their dynamic top line of Patrice Bergeron between Brad Marchand and David Pastrnak. Luckily for the Bruins, they were able to steal Taylor Hall from Buffalo at the deadline and change their fortunes. Hall, alongside David Krejci and Craig Smith, has given Boston a legit second scoring line. The Bruins have dominated at five-on-five since.

Mike Reilly helps Boston’s defense, while Tuukka Rask has been lights out since returning from an injury. This is likely his last ride in Boston, so expect Rask to dial in and empty the tank over the next few weeks.

The Capitals have arguably better high-end talent than Boston. That said, Washington is a top-heavy team with little scoring depth down the lineup. They also have goaltending questions, as neither Ilya Samsonov (due to COVID-19) or Vitek Vanecek have been able to handle the load this season.

The Capitals are a good team, but have questions in some key areas. The Bruins? They are a good, veteran team peaking at the right time.

This is the best Hurricanes team since, gulp, 2005-06. In some ways, this team is even better than that one. Their defense is deeper and has more high-end skill, while their forward group is four lines deeps. The Hurricanes, who all seem to buy-in, are a legit contender to win it all this spring. Their only real question mark? Goaltending. Still, Alex Nedeljkovic and Petr Mrazek have been good enough this season. Good enough is probably all they’ll need in this series.

The Predators did well to even get here, but they aren’t a threat to win a Stanley Cup. Nashville rode a white-hot Juuse Saros to the postseason, and that usually doesn’t end well. It might be enough to give the Canes a scare, but Nashville is outmatched at every other position on the ice in this series.

The Pick – Hurricanes in 5

The ‘Battle of Florida’ is finally a go in the Stanley Cup Playoffs. Tell me that doesn’t get the men and women in the NHL offices feeling funky. These two teams also happen to be elite teams, so this series should actually be a lot of fun when it opens tomorrow night in South Florida.

The Lightning, defending champions, are getting both Steven Stamkos and Nikita Kucherov back for this series. How effective will they be, though? Kucherov hasn’t played all season long, while Stamkos has been in and out of the lineup. Yes, the Bolts are better when they are both going, but will that happen at any point during this series?

Also, can Victor Hedman be Victor Hedman? We know he’s dealing with injury, but his play in the last five weeks has been alarmingly below the level we’ve come to expect. That completely changes the complexion of the Lightning.

The Panthers, meanwhile, have had everything go their way this season. They have the best two-way forward in the league in Aleksander Barkov, who has played MVP-caliber hockey all season. Jonathan Huberdeau has taken another step, while MacKenzie Weegar has been quietly a top-ten defenseman in the league this season.

The biggest question for Florida? In net. They’ll go with Sergei Bobrovsky, who completely shut the Lightning down in 2019 but has clearly been the Panthers’ second-best goalie this season. Will that cost them the series?

This will be a battle, and honestly comes down to a coinflip.

The Pick – Panthers in 7

The Blues of 2019, who won the Stanley Cup, seem so far away from this current edition. The loss of Alex Pietrangelo has deeply impacted this team, taking away their swagger and defensive punch. The Blues also look slow most nights, and haven’t had a single stretch this season where they look like the elite team we saw from the second-half of 2018-19 through the end of the last regular season.

The Avalanche, meanwhile, are the best team in the NHL. They are loaded at both forward and on defense, have arguably the most dangerous line in hockey and are entering the playoffs healthy. Nathan MacKinnon is by far the best player in this series, and that means something.

If one thing can sink the Avalanche, it’s their goaltending. Philipp Grubauer is a solid goalie, but has had trouble staying healthy over the years and has struggled in past postseason appearances. Behind him, the Avalanche have Devan Dubnyk, who is clearly on the downswing of his career.

Still, this series is such a mismatch that it won’t matter much.

The Pick – Avalanche in 5

Vegas is a legit contender to win it all, while the Wild are a team admittedly retooling on the fly. On paper, the Golden Knights should win this series pretty handily. I’m not so sure about that, though.

Vegas is deep everywhere, and has the best goaltending in the entire NHL. Yet, they seem ripe for an upset here. Why? The Wild have some pretty darn good goaltending of their own in Cam Talbot, who went 19-8-5 with a .915 save percentage in 33 games. They also have more talent that they’ve had in years.

Calder Trophy favorite Kirill Kaprizov scored 51 points (27 g, 24 a) in 55 games as a rookie, while Joel Eriksson Ek has emerged as one of the top two-way forwards in hockey. Normally a boring team, the Wild have talent and depth up front.

They’ve also done well against the Golden Knights this season. The Wild went 5-3-0 against Vegas this season, proving they match up well with them.

Team chaos would deliver a Canadiens series victory here, but I just don’t see how they do it. Carey Price could turn back the clock and shutdown the Leafs, but Price still hasn’t returned from his concussion and it’s undetermined if he’ll be ready for Game 1. Even if he is, how good will he be?

The Canadiens’ best bet here? Get elite goaltending and bank on the fact that the NHL won’t call every hook and hold you commit.

The Leafs have the high-end skill. They finally have the depth up front thanks to additions like Joe Thornton, Jason Spezza and Nick Foligno. Defensively, TJ Brodie has greatly helped the Leafs this season. They may not be ‘win the cup good’ on the backend, but they are improved and better than people give them credit for.

Once again, Toronto’s biggest question mark is in goal. Can Jack Campbell keep a magical season going if called upon? This is a stage he has never had before. Can Frederik Andersen return and have an impact after two lackluster seasons? As good as the Leafs are, that one position could sink them earlier than anyone thinks.

I’m not sure the Canadiens are good enough to exploit it, though.

The Jets could enter this series without the services of Nikolaj Ehlers, their most underrated weapon who dominates in the transition game. Even if Ehlers plays, it’s doubtful that he’ll be at 100% at any point in the series.

What could sink the Jets? Their defense. Winnipeg has the worst five-on-five defense of the 16 playoff teams in the NHL, and their penalty kill has struggled against Edmonton’s potent powerplay this season.

What could sink the Oilers? Goaltending, again. Mike Smith has been outstanding this season, but can he carry that momentum into the playoffs? Oh, and while the Oilers lit Connor Hellebuyck up during the regular season, he’s still one of the best goalies in the world and does have the ability to win a series on his own.