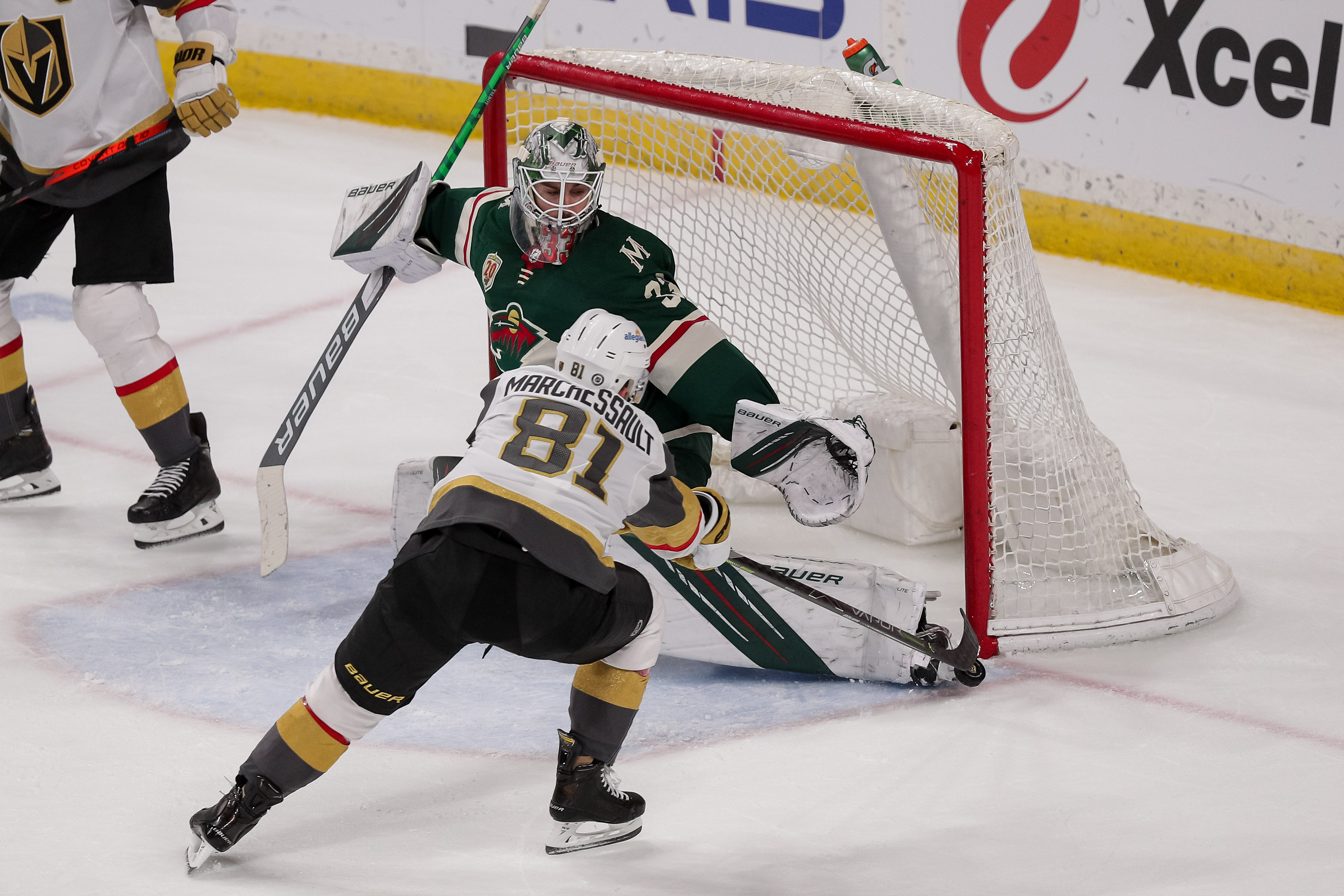 Its playoff time once again folks.  No bubble (yet), but it should still be a very spirited series between the Minnesota Wild and the Vegas Golden Knights.  Since the Golden Knights arrived to the league, Minnesota has been a thorn in the side of one of the league’s most ‘lucky’ clubs.  It has held true this season as the Wild went 5-1-2 against the Golden Knights which was the best in the Honda West division.

That should give the Wild some hope, but all bets are off (no Vegas pun intended) once they drop the puck this afternoon against the Golden Knights.  The playoffs introduce a whole new level of intensity and it will be interesting to see if the fact the clubs have been limited to divisional play all season will mean the animosity will be very evident from the start.  Especially with Ryan Reaves absent, the Wild have been a bit more aggressive against the Golden Knights and there has been plenty of chirping between the two clubs.  Reaves has terrorized the Wild in his time with the Blues and Golden Knights and no doubt when he’s on the ice, the team plays differently as they know they might be lined up for a big hit by #75.

For simplicity reasons, I have included the 2021 NHL regular season stats.  After this game we will start using playoff statistics but for right now this will help give you an idea as to how these teams match up on paper at least.  On an injury front, the Wild (knock on wood) are healthy, while according to TSN.ca the Golden Knights have a small contingent of players including leading goal scorer Max Pacioretty, Tomas Nosek, Alex Martinez and youngster Peyton Krebs who are all listed as day to day.  Reaves is currently on injured reserve which certainly will not be missed by the Wild one bit.

Since this is the 1st game of the series we are going to look at the main components of the teams and assess which club has an advantage.

The Golden Knights have impressive depth up front, led by team captain and jack-of-all trades Mark Stone.  Especially when he’s playing along side Max Pacioretty, they are one of the most dangerous 1-2 combinations in the league.  ‘Wild Bill’ William Karlsson, Jonathan Marchessault, Reilly Smith, Chandler Stephenson and former Minnesota 1st rounder Alex Tuch give the Golden Knights plenty of offensive punch through its top 3 lines.  This makes Vegas tough to match up against.

Yet, while Vegas probably is better known for their offensive firepower, the Minnesota Wild are also impressive in its scoring depth.  Calder Trophy candidate Kirill Kaprizov has been the x-factor for the Wild all season, giving the team a player who can manufacture offense out of nothing.  Kevin Fiala had a frustrating playoffs last season as Vancouver targeted him physically that appeared to take him out of his game.  With Kaprizov there and probably playing on a different line, maybe that will give Fiala the freedom he only wished he had a season ago.  Still, the Wild have been a score-by-committee team most of the season as Joel Eriksson Ek, Mats Zuccarello, Marcus Foligno, Nico Sturm, Victor Rask and Nick Bonino are all forwards who have at least 10 goals this season giving the club scoring through all four of its lines.

Advantage If Pacioretty is out of Vegas’ lineup I’d give a slight edge to the Wild, otherwise I’d give the Golden Knights the advantage but only slightly.

The Golden Knights were on a mission last summer to acquire an upgrade for their defense and they signed free agent in Stanley Cup champion Alex Pietrangelo to lead the way.  Vegas’ defense is a good mix of skill in leading offensive defensemen Shea Theodore and Alex Martinez and grit in Brayden McNabb, youngster Nic Hague and former Bemidji State Beaver Zach Whitecloud.  Dylan Coghlan and Nick Holden wait in the wings in case someone gets hurt.

Minnesota’s defense is also an area of strength for the club; led by team captain Jared Spurgeon who plays on the team’s top pairing with Ryan Suter.  Jonas Brodin has enjoyed his best season offensively after he signed a big 7-year contract extension and his partner Matt Dumba has been the club’s best pairing on and off throughout the season.  The Wild traded for Stanley Cup experience in Ian Cole and he’s paired with gritty Carson Soucy to give the Wild a dose of sandpaper on its back end.  Dakota Mermis, Brad Hunt and possibly youngster Calen Addison will be ready to step in if needed.

The Golden Knights defenseman generate a bit more offense than the Wild’s blueline has this season and I think that could possibly be a key component in this series for Vegas.  Advantage Golden Knights.

The Golden Knights’ raised some eyebrows when they decided to keep Marc-Andre Fleury after he showed his discontentment last playoffs after being supplanted by Robin Lehner.  Yet despite his agent, Allan Walsh‘s use of a impalement meme they kept him around and that was proved to be a wise decision by the Golden Knights.  He’s been absolutely outstanding for the Golden Knights as he carried most of the goaltending load as Lehner took a while to return to health.  Lehner wasn’t too bad in his return but Fleury clearly appears to be the team’s go-to puckstopper going into the playoffs.

The Minnesota Wild parted ways with Devan Dubnyk and they brought in Cam Talbot to replace him.  Talbot gave the Wild what it didn’t have in Dubnyk the last two seasons, competent goaltending and the result was the Wild made their way near the top of the Honda West division.  Yet it wasn’t without help.  It was supposed to be Alex Stalock, but a bout of myocarditis put him on the shelf before the season started so the team gave youngster Kaapo Kahkonen a chance and he excelled in his debut.  Eventually Kahkonen’s play tailed off a bit, but fortunately Talbot was able to carry most of the rest of the goaltending load.  However, both goaltenders have had some struggles down the stretch and the team’s goals against numbers have steadily climbed the last few weeks.  Advantage Golden Knights.

The Golden Knights’ penalty kill has been one of the best in the NHL all season long.  That is part of what makes Vegas so dangerous as they’re potent offensively but also fairly stingy defensively.  Of course a big reason for that is the play of Marc-Andre Fleury, and the Golden Knights have a collection of fast penalty killing forwards that do a great job of denying time and space in the offensive zone.

On the power play, Vegas is fairly average when you consider how much firepower they have up front.  The Golden Knights’ power play has burned the Wild penalty kill on back door plays where they set up their defenseman for one-timers.  Alex Martinez and Shea Theodore are especially good at picking that right time to move to one of the faceoff dots for a back door set up.  Still with forwards like Stone, Marchessault, Tuch, Smith and Pacioretty the Golden Knights give the Golden Knights plenty of scoring threats on the man advantage.

Meanwhile the Minnesota penalty kill has declined steadily the last few weeks of the season as has the quality of play from its goaltender.  The Wild’s best penalty killers in Joel Eriksson Ek, Marcus Foligno as they do a good job of using their reach and being physical at the right times.  Its once that 1st group of penalty killers comes off the ice, that is when the Wild seem to have issues.

With the man advantage, that too has slid a bit the last few weeks.  Its top power play unit of Kaprizov, Bonino, Fiala, Rask and Spurgeon may not seem like completely obvious choices but this is the group the Wild have had the most success with this season.  Rask and Bonino do a reasonable job of gathering pucks and distributing them to the shooters that are Spurgeon, Fiala and Kaprizov.

My assessment doesn’t look promising for the Wild, but somehow this club has done well against the Vegas Golden Knights.  So what are the keys to a Wild victory?

1. Play with intensity and urgency ~ If there has been anything consistent from Minnesota’s playoff failures is they sometimes feel they can work their way towards full playoff intensity.  Minnesota must bring it right away and they should be fairly well-rested and ready to go.  No more excuses, play hard and play like every game is your last.  That means playing tough around your own crease and an inspired will not be denied mentality near the opposing goal.  Winning those battles will win or lose games in this series.

2. Don’t chase the game ~ A lot is made about scoring the first goal, but with these two clubs it becomes even more important.  Especially on the road, it is important for the Wild to get that first goal and do what they can to control the emotional tone of the game.

3. Tape to tape ~ Minnesota is at its best when its making short little passes and leaving their zone with efficiency and under control.  The team struggles when it is forced to resort to just chipping the pucks off the boards and glass and making for easy turnovers.  Puck possession is not just desirable but is crucial as Vegas is one of the best teams in transition in the league.  So it is paramount to be accurate and being smart with the puck at all times no matter where you are on the ice.

What do you think will be keys to a Wild victory over the Golden Knights?  Let us know on Twitter at @CreaseAndAssist or @MNSOTA24!