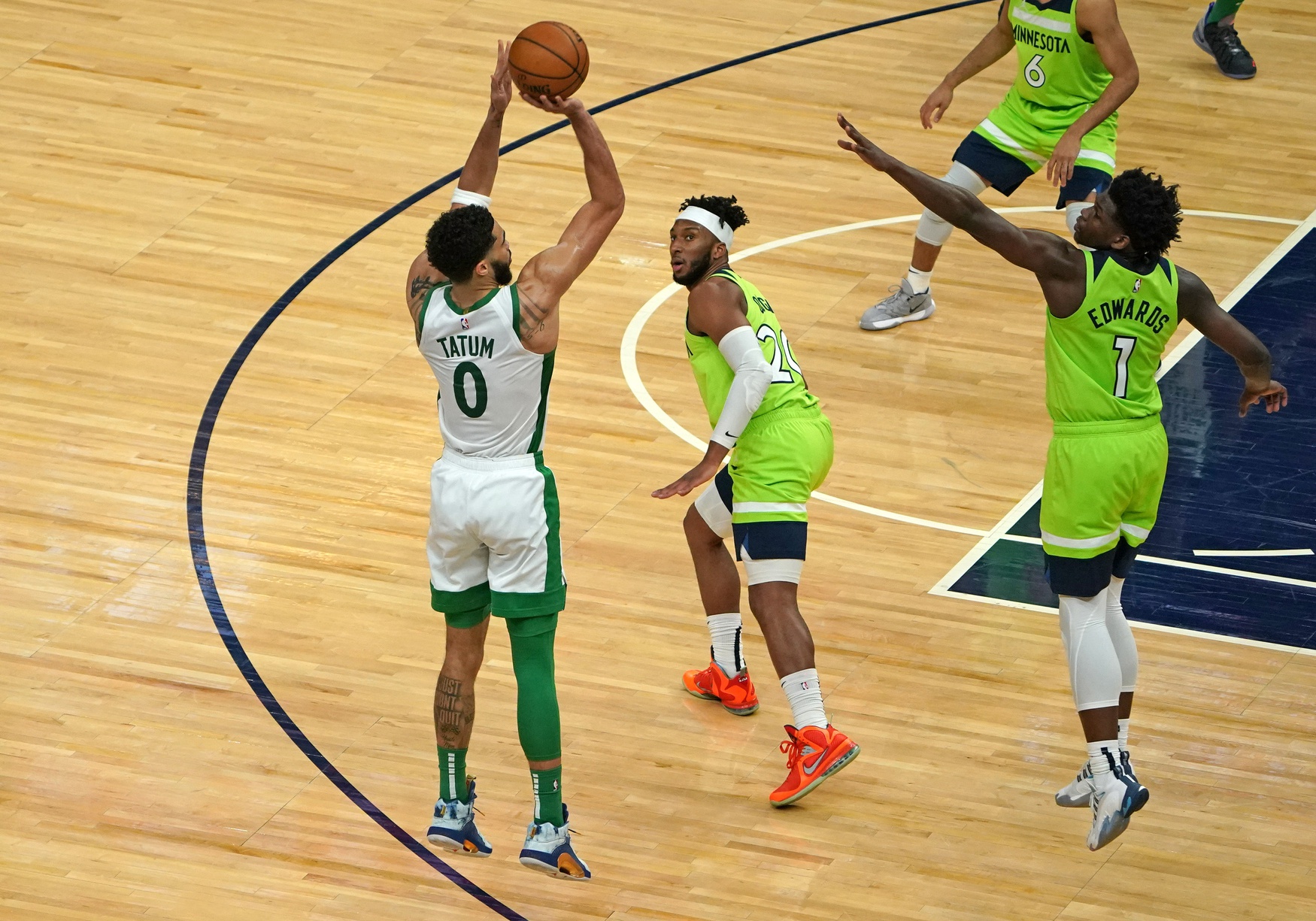 I especially love words that make sense on one level, but make no sense on another.

Like ‘jumbo shrimp’, or the way ‘campus’, which originally meant ‘open field,’ now means ‘a bunch of buildings.’

Normally — when that used to be a thing — the C’s have some downtime between the end of the regular season and the playoffs.

That’s the case for the playoff-bound teams this year; the regular season ended Sunday while the first day of the playoffs is six days later. But Boston needs to wade through the play-in tournament first, which tips off against the Washington Wizards at 9 p.m. Tuesday.

“I treated it a lot like a Thursday-Saturday NCAA Tournament, where you have the one day to prepare,” Stevens said after Monday’s practice. “There’s obviously a lot more familiarity with opponents in the NBA because you play everybody and we played Washington three times this year and have played against Scott’s teams forever, so they know us and we know them.”

Stevens is going to have to draw off another aspect of his college basketball days: one-and-done. While the C’s, as the 7th seed, have to lose twice to fall out of the playoffs, the situation has more in common with the NCAAs than it does with the NBA playoffs as conventionally constructed.

With (potentially) two games against two different opponents playing with chips on their shoulders, this is not necessarily a situation where the better team is going to advance. Over the course of 48 minutes, a sufficiently motivated team that is objectively not as good has a chance at an upset.

That, ultimately, is the value of a long playoff series from a competitive standpoint: The better team almost always emerges victorious (of course, the league prefers these arrangements for monetary purposes, but as baseball found out with a 9-game World Series format around a hundred years ago, you can only stretch things so far when it comes to milking money from your fans).

The C’s are going to have to hit the ground running tonight if they want to avoid a long summer vacation.

Now, of course, I would argue (have argued, in fact) that a long summer vacation is not the worst thing that could happen to a team this beat up and worn down, but as others have pointed out, putting in a respectable showing in the playoffs has its upsides:

For those you hoping the Celtics season ends as soon as possible:

I love that the tweet has another example of a word that amuses me:

‘re-sign’ and ‘resign’ mean pretty much the exact opposite. It’s similar to the way ‘raze’ is pronounced the same as ‘raise’.

Anyway: John has thoughts about the playoffs too…

“Everybody practiced, so that’s encouraging. And the hope is that we will have everybody available. I think (Robert Williams) will still be a game time decision. But (Marcus) Smart looked great, Kemba (Walker) was good, Tristan (Thompson) is still dealing with some soreness, it looks like he’ll be good.”

And here’s where the talk starts to talk people into believing in something.

The Celtics, when mostly healthy, have some great wins on their resume. This season has been such an aberration from their norm that there’s still a feeling, based on some of those wins, that a motivated, healthy group can play stronger, faster, and better. With most of their key guys getting some extended rest over the past week, there’s a feeling that maybe they’ll have a little extra oomph to start this game.

I love that caveat, ‘when mostly healthy’—because the C’s ain’t ever been fully healthy at any point this whole cursed season.

“A little extra oomph to start this game” is just what the C’s need. The best chance the C’s have of putting away the Wizards would be never giving them a chance. If the Wizards come out hot, or if the C’s let them hang around, you start getting into that NCAA upset territory as the game goes on.

And that brings us around to Tatum:

Tatum must assert himself early. For all of his magical offensive performances this season, including tying Larry Bird’s single-game scoring record with 60 points, Tatum sometimes seems to ease into games. The Celtics too often follow his lead only to find themselves down double digits.

Consider this: Tatum scored 3 points or less in the opening frame 26 times this season, including eight scoreless first quarters. Jaylen Brown excelled as a tone-setter and Tatum must do the same on the playoff stage. The Celtics rarely hit first this season and this team cannot wait for Westbrook or Beal to take the first swing on Tuesday night.

Now to my way of thinking, these struggles are part of Tatum’s growth, not a sign that he’s not growing. Tatum’s only 23, and is still learning to find the sweet spot between trying to do it all and deferring too much. It’s patently obvious, almost certainly to him as well as the rest of us, that if he tries to do too much, bad things happen to the C’s. But he also has to know that if he’s too passive, too much of the load on offense falls on guys who aren’t as capable of carrying it. He’s an exceptionally talented guy who is still learning how to use the tools he has while trying to develop new ones.

But, of course, once the playoffs start, working on your game takes a back seat to winning games.

The Celtics would be better off right now if Jayson Tatum grew up idolizing Kevin Garnett rather than Kobe Bryant.

Please don’t take this as a knock on Bryant, one of the greatest 15 players of all-time. Nor is it a knock on Tatum for looking up to him to the point of emulation. He’s hardly alone there.

Chad Finn is the closest thing the Globe has to a successor to Bob Ryan. And by that, I mean that Chad is a guy who relies on reason instead of hyperbole, and who seems to be a genuinely positive guy.

But I disagree with Chad here.

He goes on to add this remark (which I agree with entirely):

His approach to the game, especially in 2008, is the closest my generation and younger will come to witnessing something approaching Bill Russell’s basketball ethos in our time.

I think it would be impossible to dispute this claim.

However, I think painting things in a Kobe or KG light is a bit of a false dichotomy.

I think that, if we expand the scope and look back to Russ’s teams, as well as KG’s teams in Boston, we can find better models for Tatum than KG.

Because, you see, Russ and KG were all about defense, and that lends itself to thinking first about the team. All the statisticians in all the world could not come up with a way of measuring what Russ and KG contributed to winning.

But if you’re a guy like Tatum, there are a ton of stats that measure what you contribute to winning, and that’s where it’s instructive to look, perhaps, at Paul Pierce instead of Kobe.

Pierce and Kobe come up in very different categories whenever people talk about ‘greatness.’ To most, Kobe belongs in that rarefied air where he’ll always have people saying that he was the greatest player ever. Pierce, on the other hand… There are people who insist he shouldn’t have been a first-ballot hall of famer.

However, I don’t think there’s that much difference between the two of them. To be sure, Kobe’s teams had more success, but that’s more of a testament to Jerry West’s skill as a GM than it is to Kobe, who struggled mightily when he was not on the court with other all-stars. Between the two, Pierce was, of course, nowhere near as adept a scorer. But I put it to you that Pierce’s evaluation of his own abilities was far more honest than Kobe’s evaluation of his abilities.

In short, you could count on Pierce, once he hit his stride, making the right basketball move more often than you could Kobe, and that I think, is why Kobe so rarely made the guys around him better. And that’s also why I think the better player for Tatum to emulate is Pierce, especially grown-up Pierce.

Tatum, like Pierce and Kobe, is going to score a lot of points over his career, and he’s got to find the right balance between scoring himself and giving other guys the opportunity to score, and there, I think, a better model is Pierce.

Sam Jones had to wait ten years before the basketball HOF gave him a call.

In another world, on another team, Sam Jones could’ve been a household name. If you think he wasn’t as good as he was, go watch some film. He was the equal of any guy he played against…

And go ask Jerry West how many of his points he’d be willing to trade for a few of Sam Jones’ rings.

The C’s as currently constructed can, I believe, be a very very good team, again, provided they are healthy. But their greatness will need to be of the sort that Russ’s teams were great. Each guy had a role, each guy knew his role, and each guy was good enough to do far more than what he was asked to do—but everybody gave up a bit for the good of the team.

And that, IMO, is what Tatum is learning—and he’s going through some growing pains along the way. He’s still working to find the balance between taking over a game and making sure that the ball finds the best shot.

I’m sure he’ll get there, though.