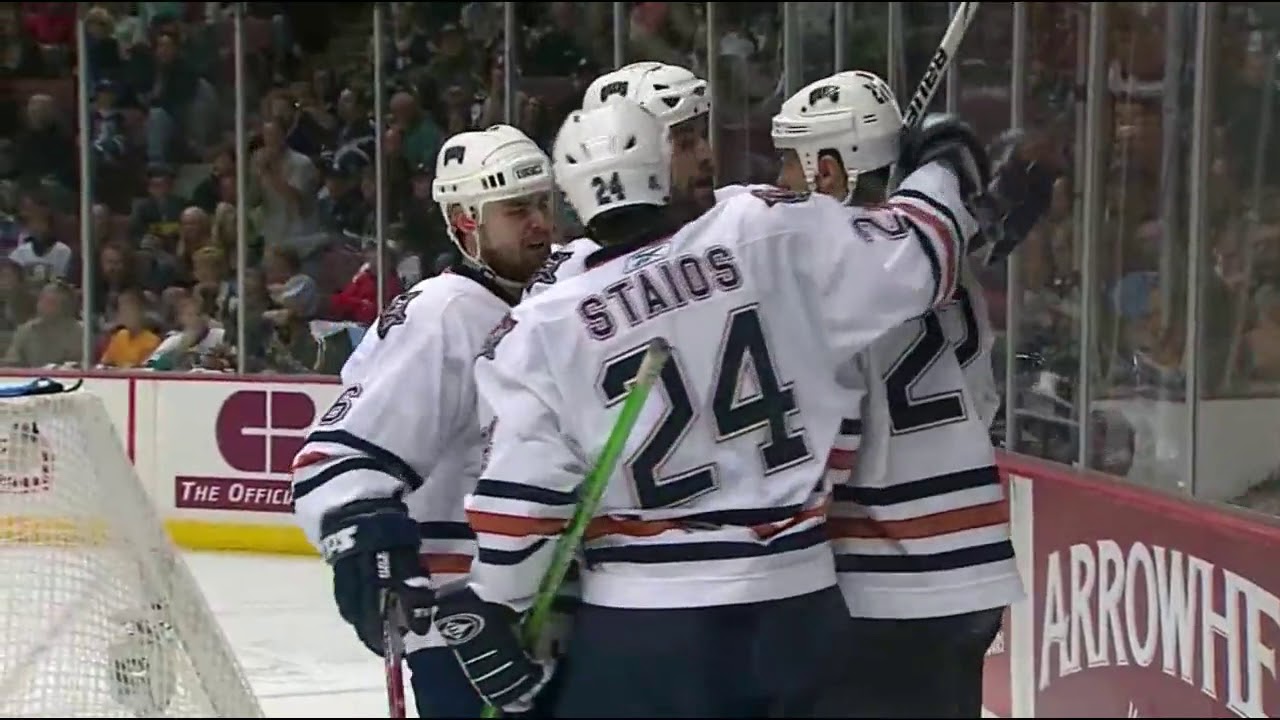 For the first time since 1992, the Edmonton Oilers were in the Western Conference Final. On this date 15 years ago, the Oilers pulled into Anaheim, California for Game 1 of the 2006 Western Conference Final. A ragtag, underdog eighth seed, the Oilers faced a Mighty Ducks team that placed sixth in the West during the regular season. It was an unlikely series, to say the least.

The series would provide fireworks in Edmonton, but in Anaheim, tight games were the theme. Game 1 featured only four goals, and featured the visitors finding many different ways to put the puck in the net.

The scoring started in an unlikely way, as a lead pass by the Ducks missed the mark and ended up on the Edmonton net. With plenty of room, Dwayne Roloson flung the puck off his backhand and out towards center ice. The puck took a favorable bounce, and came to Michael Peca.

Peca jumped into the offensive zone on a breakaway, and tucked a backhander home by Ilya Bryzgalov to open the scoring shorthanded at 18:35.

Unfortunately for the Oilers, the lead didn’t hold very long. Francois Beauchemin took a pass at the point on the same powerplay in which the Ducks surrendered the shorthanded goal. Beauchemin fed a pass over to Andy McDonald, who settled the puck and then blasted home his second of the playoffs on the powerplay to tie the game. The goal came at 19:03 of the opening period, just 28 seconds after Edmonton’s shorthanded marker.

Special teams would play a factor in the second period as well. With the score still tied at one, the Oilers went on the powerplay just over halfway through the second period. Ryan Smyth walked right into the slot and fired a shot at Bryzgalov that he easily denied. The rebound bounced up into the air, however, and Ales Hemsky alertly went into action. Hemsky waited for the puck to go below the crossbar, then batted the puck into the goal at 11:35 to put the Oilers ahead 2-1.

That would be enough on this night.

The Oilers buckled down in the third period, and prevented the Ducks from any offensive chances of note. At 19:18 of the final period, Todd Harvey took the puck at center ice and fired it into the empty net for his first of the playoffs, cementing the victory.

Edmonton, for the first time in the 2006 Stanley Cup Playoffs, went on the road and won Game 1 in a series. Their 3-1 victory was their fifth straight win, and put Edmonton in control of the series.

Now, the Oilers were just three wins away from their first visit to the Stanley Cup Final in 16 years.