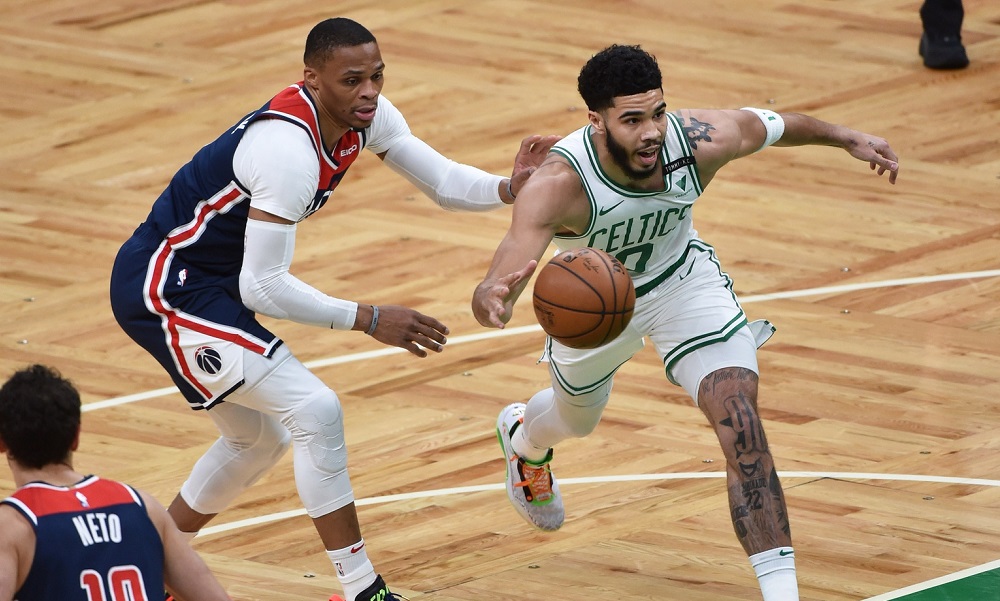 Jayson Tatum is the only player in Celtics history to log multiple 50-point games within the same calendar year. He's now recorded 3 such efforts in the last 40 days.

For at least a couple of years, Lakers fans tried to tell us that Lonzo Ball, Brandon Ingram and Kyle Kuzma were all better than Jayson Tatum. Now they’re tweeting Photoshopped pictures of JT in that horrid yellow and purple uniform. That’s how thirsty they are for the young superstar who they could’ve drafted outright with the second pick in 2017.

Tatum took another giant step last night, overwhelming the helpless Wizards from the field and the foul line. What he lacked in efficiency (14 of 32 FGs), he made up for with quantity (5 of 12 threes and 17 of 17 free throws). JT’s scoring by quarters: 6, 12, 23 and 9, helping the Celtics outscore the Wizards 66-46 in the second half. Washington simply couldn’t contain him.

With 1:46 remaining in the second quarter, the Wizards held a 50-42 lead, but then the game turned. Kemba Walker scored an and-one, Tatum was fouled on a three and made all the FTs, then JT had an and-one on a 15-foot fadeaway. All this contributed to Boston closing the gap to 54-52 at the half.

The Celtics then rode that momentum by opening the third with a 17-2 run, with all the points scored by Tatum (8) and Kemba (9 on a trio of triples). The Celts were up 90-80 entering the fourth and never looked back, leading by as many as 22.

Let’s not overlook what Kemba Walker did last night.

Big Russell Westbrook fan. But tired of him complaining every time someone in media critiques his game.

After weeks of putting up triple-doubles in regular season got outplayed by Kemba Walker in biggest game of the year.

Although Tatum was completely out of the box, he couldn’t do it alone. With Jaylen Brown injured, Kemba delivered a game reminiscent of his years in Charlotte: 29 points, 6 of 14 from the arc, 7 rebounds, 2 assists, 2 steals and a block.

For the Celtics to have any chance in the first round against Brooklyn, Kemba must continue to be Robin to Tatum’s Batman. If he does, all those missed back-to-back nights will have been worth it.

In this space we complain about officiating probably too much, so we now acknowledge that Boston got a better whistle than Washington.

Wizards starting forward Rui Hachimura was a non-factor after getting in foul trouble early. He finished with 5 fouls and 8 points in just 17 minutes. Russell Westbrook also finished with 5 personals on his way to not getting a triple-double (20/14/5).

Feeling bad for this guy. As difficult as this Celtics season has been, they entered last night relatively healthy (except for Jaylen) compared to the past 72 games. How far they might’ve gone with a completely healthy roster is something that now we’ll never know.