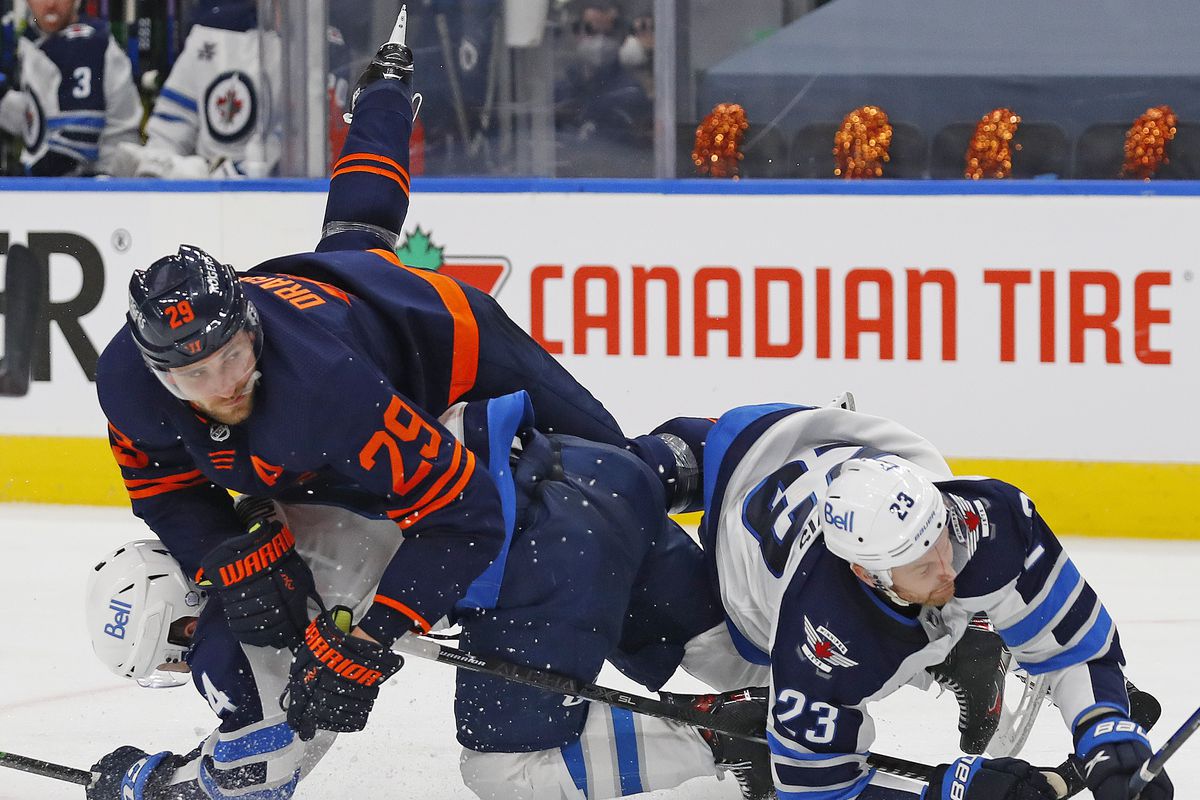 The Edmonton Oilers outshot, out-chanced and, for the most part, outplayed the Winnipeg Jets in Game 1 of their 2021 Stanley Cup Playoff First Round series on Wednesday night. Unfortunately, that didn’t result in a win. Now, the Oilers find themselves trailing the series 1-0 and in desperate need of more offense in Game 2.

The Oilers host the Jets at Rogers Place tonight in Game 2 of this best-of-seven series. Thanks to the aforementioned 4-1 victory on Wednesday, the Jets hold a 1-0 lead in the series. Edmonton, however, went 7-2-0 in the regular season and won each of the last six meetings. They’ll be looking to start a new streak tonight.

Edmonton: Use the front of the net more. The Oilers had 13 high-danger scoring chances on Wednesday night, but barely created any second or third opportunity looks. That has to change if they are going to have success against Hellebuyck in this series. The Oilers need to make life more difficult for the Winnipeg netminder, and need to create more chaos in front of the goal. Get him moving laterally and success will follow.

Winnipeg: Slow down the rush. The Oilers feasted on the Jets during the entire regular season series with offense off the rush. In Game 1, the Jets were able to limit the Oilers to just five chances off the rush. If the Jets can make that a habit, they’ll have a great chance to not just win tonight, but to win the series.

Edmonton: Leon Draisaitl fired four shots on goal Wednesday night and completely tilted possession when on the ice. He was rewarded with no points on the night. Draisaitl scored twelve points in nine regular season games against the Jets this season, and if his line controls possession again like they did in Game 1, the offense will come. Expect a big night from the big German.

Winnipeg: Pierre-Luc Dubois was a two-way monster for the Columbus Blue Jackets last August as they upset the Toronto Maple Leafs in the Qualification Round. Tonight, Dubois will make his Jets playoff debut, likely skating on the wing. Dubois is a big body who has proven he can take control of playoff games. That’s a mighty big weapon for Winnipeg to add to the lineup.

Dave Tippett said that he will not be making any changes to his skaters tonight, but did not promise any specific line combinations. The expectation, however, is that Tippett will roll with the same lineup as Game 1. That means Devin Shore, Kyle Turris, Tyler Ennis, Patrick Russell, Gaetan Haas, Joakim Nygard, William Lagesson and Alex Stalock are healthy scratches.

The Jets are getting a big piece back as Dubois re-enters the lineup after missing Game 1. Nikolaj Ehlers, however, remains out with an upper body injury. Ehlers could return on Sunday night for Game 3, however. The Jets are also without veteran defenseman Nathan Beaulieu.

“There’s no reason to panic,” Connor McDavid said earlier Friday. “This is obviously a big game for us tonight. A chance to even the series and move onto Winnipeg all tied up. They were kind of waiting for our mistakes. First and foremost, you don’t want to give them that mistake. You don’t want to turn pucks over but you still have to make plays, be creative and play your game.”

Both McDavid and Draisaitl were held without a point on Wednesday night. That rarely happens, but when it does, they usually make up for it in the next game. The duo has tallied 26 points this season in games following a pointless effort by the two of them. That could be bad news for a Jets team that played Game 1 perfectly.

Jesse Puljujarvi just keeps on having fun. Puljujarvi scored the first goal for Edmonton this postseason on Wednesday night. It was also Puljujarvi’s first career playoff goal in, yes, his first career playoff game. The last forward to do that for Edmonton? Brad Winchester in Game 2 of the 2006 Western Conference Quarterfinal against Detroit. He’s the 13th player in franchise history to score his first playoff goal in his playoff debut.