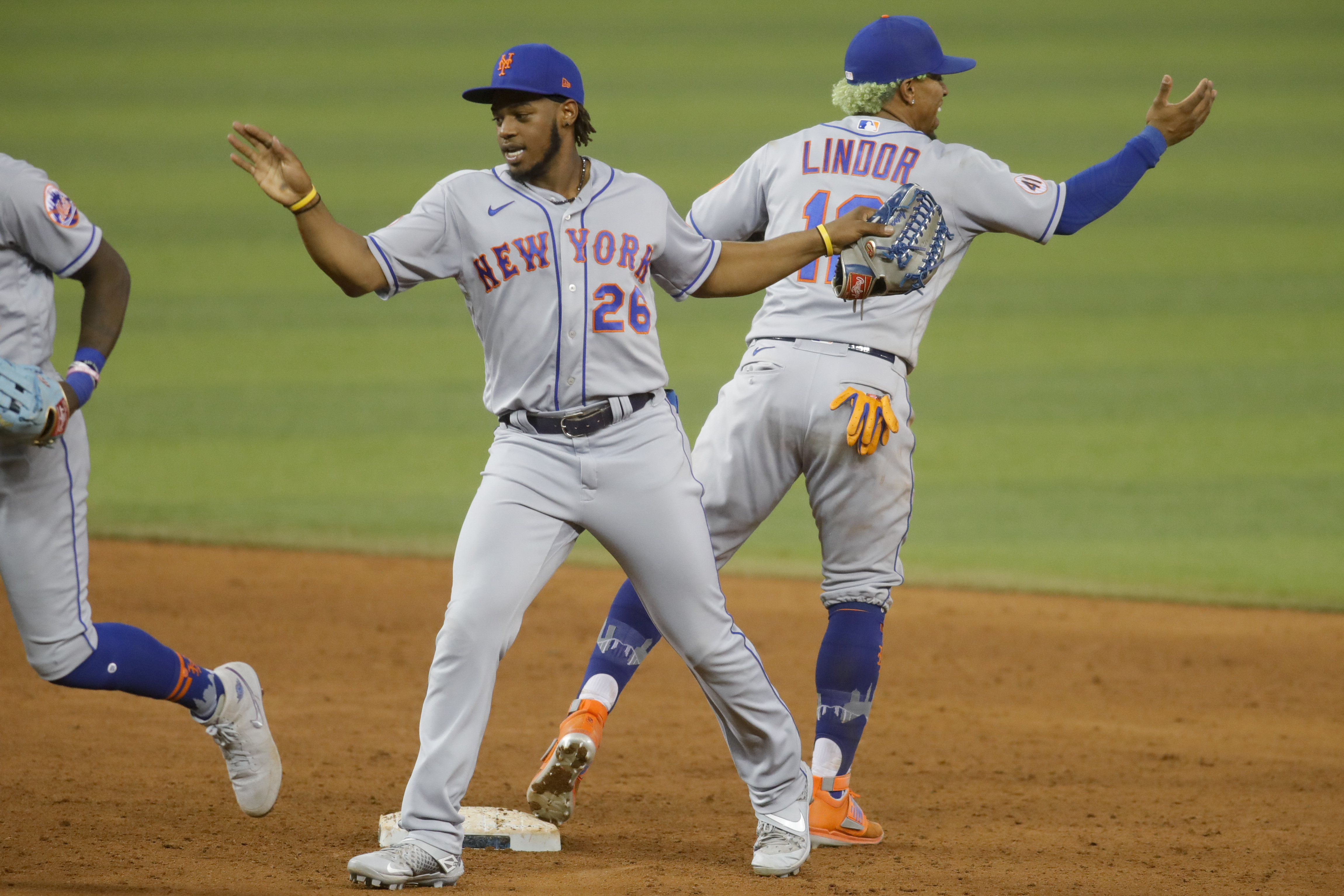 Ever since Miguel Castro threw a fat changeup down the middle to Garrett Cooper which turned into a game tying two run home run in the 7th inning on Friday, I thought that this would be it. The magical run was going to run right smack dab into the Mets’ habit of giving up heartbreaking walk-off victories to the Marlins which would result in the greatest Marlins’ victory of all time being the seventh part of Derek Jeter’s six part ESPN documentary.

After all, how much could this team take? They started the day by putting Pete Alonso on the IL after a day off turned into a sore wrist. They also put Tommy Hunter on the IL with a severe case of happiness. Like, seriously … all the guy did was be happy and you had to take him too? How the hell do we still exist? The Mets had Brandon Drury playing first base. For crissakes the Mets got Brandon Drury in January and I had no idea he was a Met until 16 players went on the injured list.

So in the 8th when Tim “Angel” Timmons was turning the strike zone into a moving target and Trevor May walked two to load the bases, I thought reality would smack us in the face. But May not only struck out Cooper to end the threat, but he also sounded a barbaric yawp as he left the mound. (For those who thought May was just a youtuber trying to play baseball like Jake Paul, May is actually a pretty good baseball player, kids.) Then in the 9th, after Jeury Familia put the first two runners on, I thought the light at the end of the tunnel was an oncoming train. Okay, here is when the Marlins walk us off. But Familia got the next three on a Jesus Aguilar infield pop up, a Jazz Chisholm lineout, and a strikeout of Miguel Rojas.

Certainly in the 10th, after a passed ball sent the ghost runner to third base with one out, yeah … this is going to be the one that gets us. But Edwin Diaz struck out Adam Duvall and Brian Anderson. Now this game is becoming the kid that says he’s going to give you a free shot but you’re not going to know when it’s coming, and it’s like “JUST PUNCH ME ALREADY!!!” The punch was certainly going to come in the form of ghost runner Jonathan Villar getting picked off third base in the top of the 11th after a Francisco Lindor single. After Cameron Maybin and Dom Smith meekly ended the inning, you just knew that this would be the beginning of the end. Here it comes … 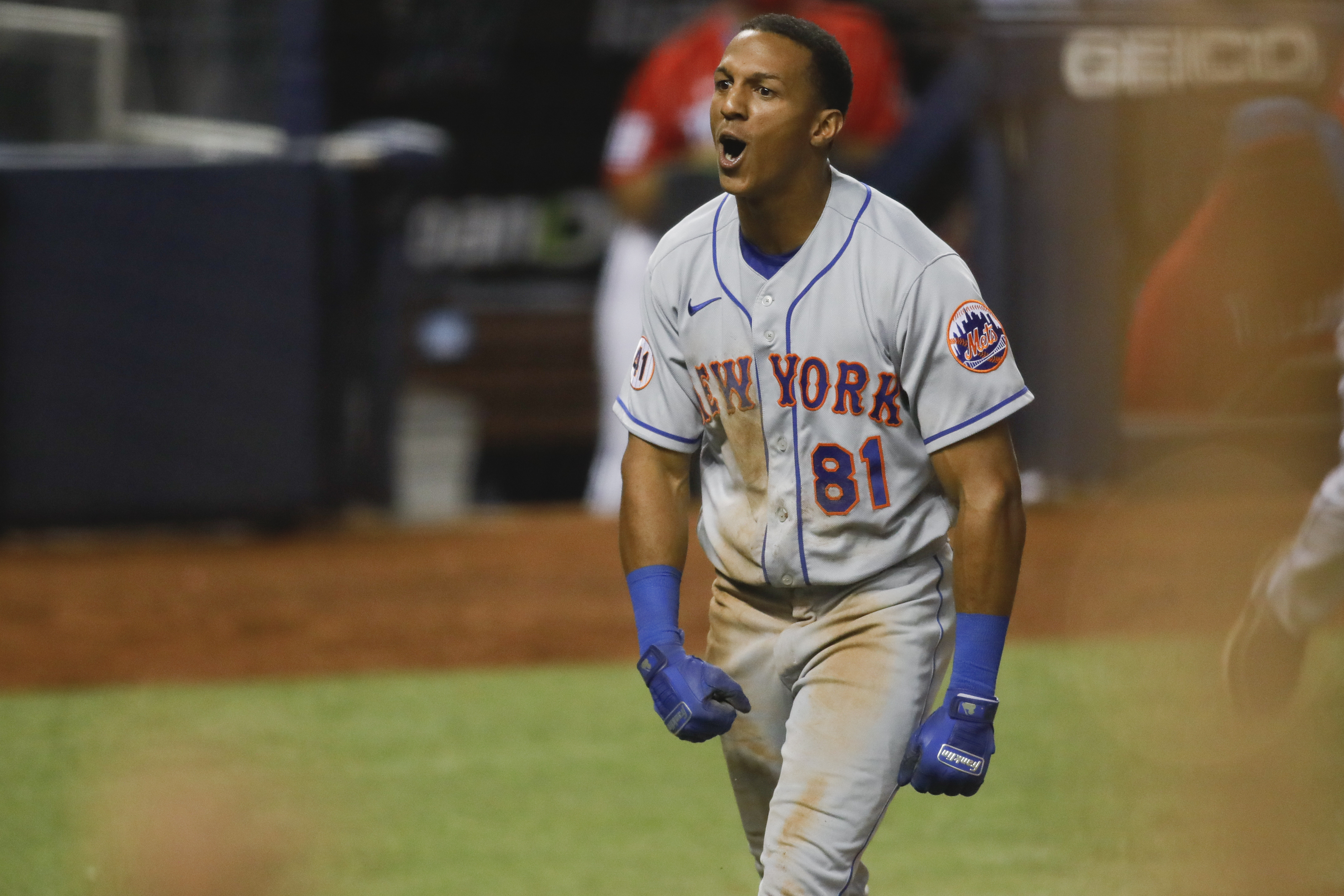 In the bottom of the 11th, the ghost runner made it to third, but Drew Smith stranded him and somehow, this game went to the 12th inning. In that 12th inning Khalil Lee, who struck out in his first eight major league plate appearances, lined a double to the right field corner to give the Mets the lead and give himself his first major league hit. The guy who scored the go ahead run was Jake Hager, who reached on his first major league hit. Then Johneswhy Fargas tripled to send two runs home to make it a 6-3 game.

This is Jake Hager … Khalil Lee … and Johneswhy Fargas, if you’re a Marlins fan keeping score in hell.

Aaron Loup started the bottom of the 12th by giving up singles to Chisholm and Rojas to score the ghost runner and make it a 6-4 game. Okay, this is it. This is how we lose in Miami this year; blowing a three run lead because DiSarcina sent Fargas home in the top of the inning and got him thrown out by ten feet. (By the way, never saw a guy get thrown out at home plate and get up and clap like he was the happiest man on earth, but that’s what makes baseball special, right?) This is when SNY put up a graphic that said the last lefty that Loup gave up a dinger two was Corey Dickerson in 2017. Hey, guess who’s up? It’s Corey Dickerson. Great. Doomed by our own network. At least I can blame Jeff Wilpon again when we lose, right?

Plot twist: Loup got Dickerson to ground into a run scoring double play to clear the bases, and then Jacob Barnes came into the game to get Adam Duvall to fly out to end the game and give the Mets another victory in a series of wins that all seem more bizarre than the last. It took two guys getting their first major league hits to combine to win this game. Wonder twin powers, for crissakes. Now the only thing left to do is call up three guys from Double A to pitch a combined no-hitter on Saturday, because this is the only way the Mets know how to win now. Also because the only pithcers probably available for tomorrow are Robert Gsellman, Yennsy Diaz and the damned bullpen catcher.

Trevor Hildenberger was just designated for assignment by the Giants. How fast can he get back here?