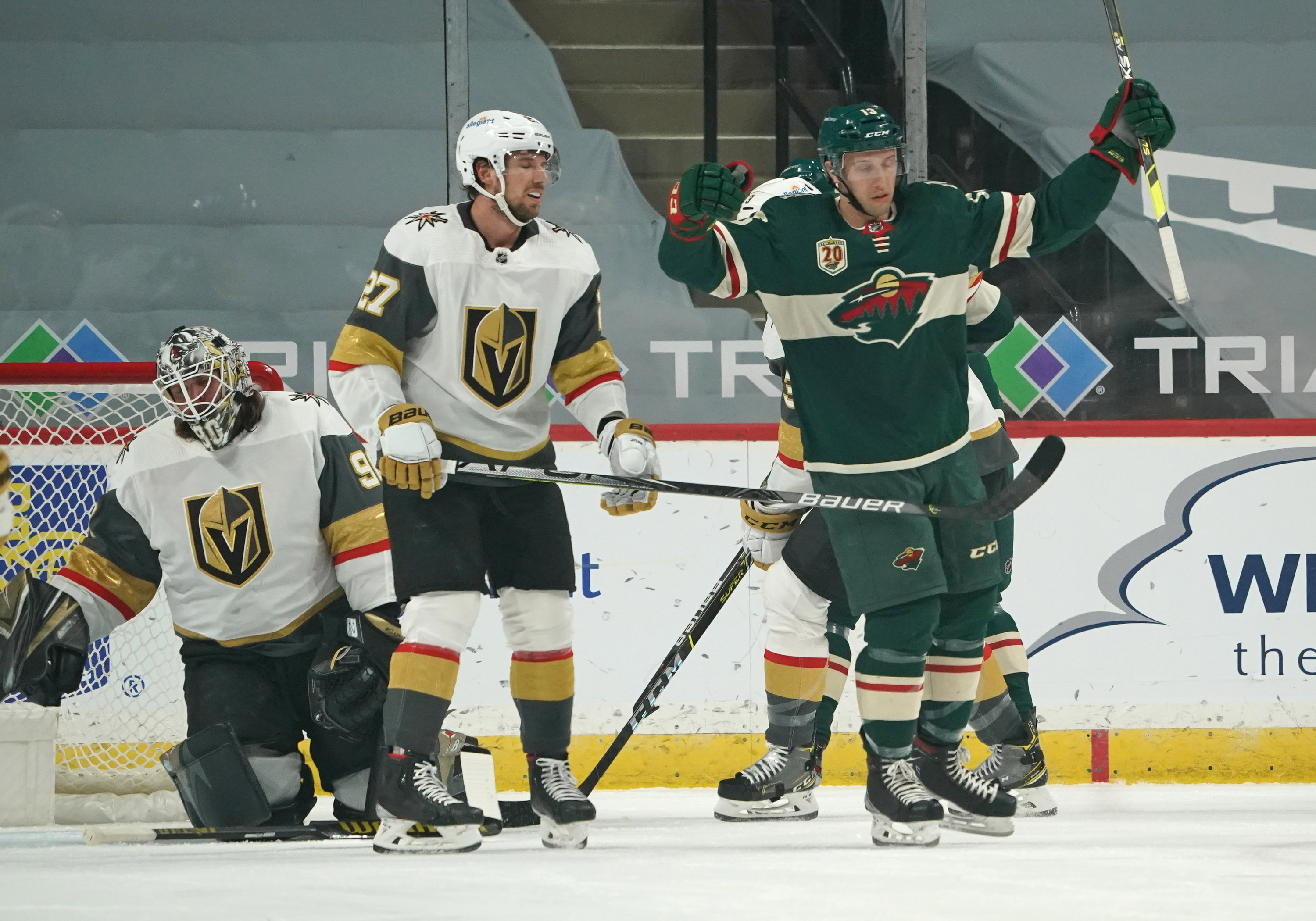 There are so many aspects in life, where the above song feels true. School, relationships, financial, health, etc. Some days, you get to celebrate an accomplishment over one success or another that you’ve been working toward for some time, only to find the new challenge associated with it may just be even harder to complete. I think for many of us, it’s those challenges that hit closer to home that are the harder ones to deal with. And as humans, we tend to focus on the two steps back instead of the one step forward.

The Minnesota Wild currently illustrate this song to perfection. Why you ask? Well let’s see, they won the first game in a 1-0 overtime shutout. I think that made us all feel pretty good. But then we dropped the next two games. And when you look at those two losses, even they exemplify this song. In both games, the first periods were all about the Minnesota Wild. Whether it was pace, or physicality, or offense, the Wild looked like the team to beat. But then in both games, the second and third periods happened, and everything pretty much went to hell. Mind you, they weren’t blowouts per se, but they were embarrassments.

Let’s talk about one major embarrassment of Thursday night’s game. In the last two periods, Minnesota was out-shot 36-9. Yes, you read that correctly. No, you don’t need to get your eyes checked. It was truly that bad. Oh, and in that last period, they didn’t register a shot in 18:02, in a period they needed to dominate. Some of this seems to be tied to Joel Eriksson Ek’s second goal of the night, which was ultimately waived off for being offsides. It’s like the team lost the laser focus they had during the first period. And then when you combine that with the injury to Marcus Johansson in a combo trip (uncalled) and step on a puck which then created shuffled lines, it was bound to unravel, and unravel quickly. Oh and then there’s the Wild’s power play. Remember how bad it was for most of the regular season, but then we got a bit of a boost for the last month? Yeah, well we’re back to the worst power play in the league kind of play. Not only has Minnesota failed to register shots on goals on most of their (rare) power plays, but they’re allowing too many short-handed odd-man chances by Vegas. That emboldens and creates confidence in the opposition, not something the Wild can afford right now. And defensive coverage? What defensive coverage? It feels completely absent, which pretty much allows Mark Stone to control the ice. Minnesota has decided to no protect the crease with their own bodies, which then leaves Cam Talbot to protect the crease all by himself.

Now, it’s time to have a little conversation with the younger contingent of Wild fans out there. Some of them are suffering delusions of grandeur over one particular Wild prospect. With the injury to Johansson, they are clamoring for Matt Boldy to make his NHL debut. In the PLAYOFFS. They continually point to his production in the American Hockey League, saying that alone is proof why he should get the call. They also have this sick need to see him paired with Kirill Kaprizov. First off, most of Boldy’s success in Iowa has come on the power play, you know where speed isn’t as important. Oh, and have they watched the playoffs? Vegas has been allowed to slash, trip, water ski to their hearts’ content, so Minnesota isn’t getting the chances with the power play. But let’s go back to even strength play. Boldy has not proven himself there, you know how most of a hockey game is played. He can dangle and has decent on-ice instincts, but he simply cannot keep up the pace of his teammates. And remember, this is at the AHL level. If he can’t keep up there, why do these people think he’ll keep up in the NHL during the playoffs? If flippin’ Kaprizov can’t find time and space on the ice, how will Boldy succeed? Children, please tell me who is the better skater between the two. I’m waiting. This isn’t Electronic Arts NHL ’21.

1. Keep your foot on the gas ~ The Wild started out well in Game 3, only to see the wheels come off in the 2nd and 3rd periods.  Minnesota played with intensity, and a north-south style that resulted in a 2-0 lead.  A slight disruption to that momentum and Minnesota was never able to regain it.  That can’t happen if the Wild wish to force this series back to a tie.  If Minnesota gets a lead it needs to keep its foot on the gas so they can finish what they start.

2. The Wild crease must be a fortress ~ Minnesota has to be more protective in the area around its own crease.  The Wild won Game #1 because they kept Vegas from having many chances from in close or in the middle of the ice.  In the next two games, the Wild’s defense allowed Vegas to work their way in close and get to the middle of the ice and it was no coincidence they were able to find the back of the net.  Minnesota must take the body with a level of ferocity and determination that has been lacking, or they will find themselves out of the playoffs sooner rather than later.  Cam Talbot can use all the help he can get.

3. Draw penalties with effort ~ I realize the Wild power play hasn’t registered a goal, but Minnesota hasn’t done enough to draw penalties.  The way to do that is through hustle and moving their feet.  Many fans were frustrated with the clutching and grabbing they saw from the Golden Knights, one way to try to combat that is to compel the officials to call a penalty by skating hard and making it more visible.