Oilers Battle To The End, But Get Swept In 3OT By Jets 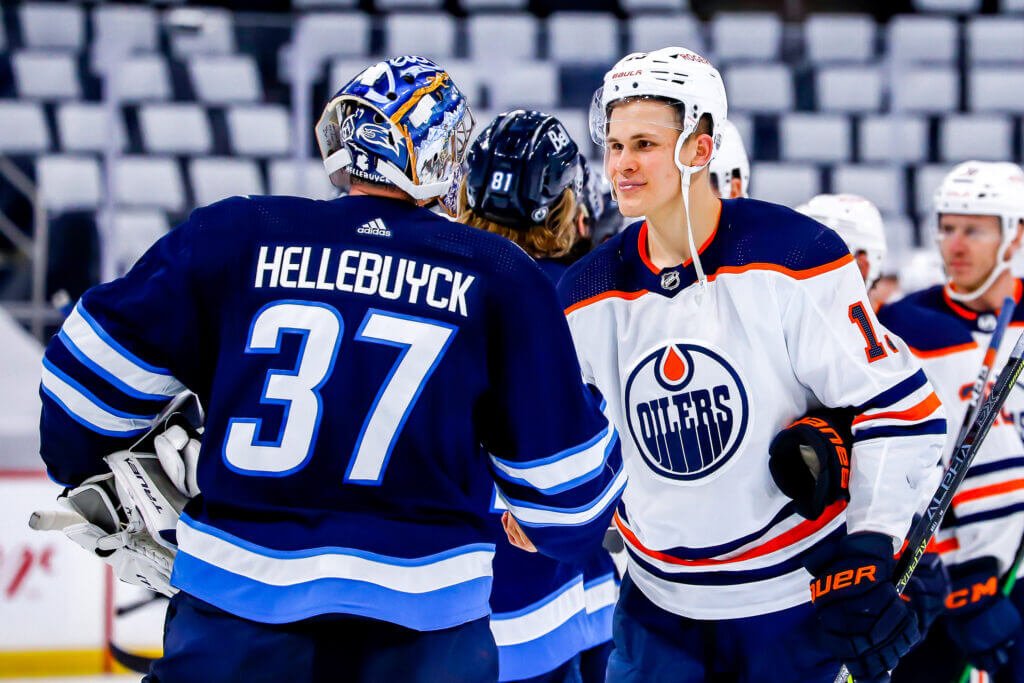 Oilers Battle To The End, But Get Swept In 3OT By Jets

Give the Edmonton Oilers some credit. After Sunday night’s embarrassment against the Winnipeg Jets in Game 3 of their first round series, the Oilers battled to the bitter end in Game 4 on Monday night in Winnipeg. Unfortunately for the Oilers, it just wasn’t enough. Kyle Connor scored in triple overtime, and the Jets eliminated the Oilers in a four game sweep.

After a regular season with so much promise, success and excitement, the Oilers season came to an abrupt and heartbreaking end in the early morning hours on Tuesday.

“It’s just disappointing,” said Ryan Nugent-Hopkins, who scored a goal in what could be his final game as an Oiler. “We battled all night, three overtimes. This is the third overtime game in four games. There’s not much to say except it’s tough to swallow right now.”

The series as a whole is tough to swallow right now. With the exception of Game 1, which featured a pair of empty net goals, every single one of these games was a one-goal, overtime affair. In fact, Edmonton carried the play at five-on-five in each of the four games.

One could make the argument, successfully, that the Oilers deserved a better fate in this series. Even if the Jets still won it, Edmonton didn’t deserve the sweep that it suffered. Deserve doesn’t mean a thing in playoff hockey, though.

At the end of the day, the Oilers are 1-7 in their last two appearances in the playoffs, and are 0-2 in series against teams they quite frankly should be beating.

“We’re still sour. It doesn’t make it any better,” a frustrated Connor McDavid said at the podium postgame. “We’re a group that expects more from ourselves. We want to push and continue to grow and obviously, we didn’t do that in the playoffs. We’re still sour, I don’t think anyone is going to deny that.”

Two positives to take away from Monday’s loss? The Oilers easily could have quit after how they lost Game 3. They didn’t, They could have quit when the Jets jumped out to 1-0 and 2-1 leads, but they didn’t. Plus, the mistakes that Edmonton committed that sunk them in this series are all fixable, little things.

“We gave it everything we had,” Tyson Barrie, a pending free agent likely to cash in elsewhere this off-season, said. “You don’t want to leave anything out there and I don’t think we did tonight. All the guys battled. It’s disappointing because we feel like we’ve got a lot of hockey left in this room. It’s a tough way to go.”

As for the mistakes made?

“It’s the little mistakes, it’s just the little ones. It’s not earth-shattering stuff here. It’s a fine line,” McDavid added. “We talked about those lessons. I guess we’ve learned over the years and this is another to take forward.”

The next few days won’t be easy for the Oilers and their fans. The days following that will be even tougher for GM Ken Holland. Edmonton’s lack of depth played a big role in their loss in this series. Now, with salary cap space  to play with, the veteran GM must add support for his top players this off-season. That will be key if Edmonton is to take a step and finally win a round next spring.

Until then, the sting of Monday night will stay. It’s little consolation right now, but the Oilers can keep their heads high knowing they battled until the final goal, had a sensational regular season and likely deserved some kind of better fate in this series.