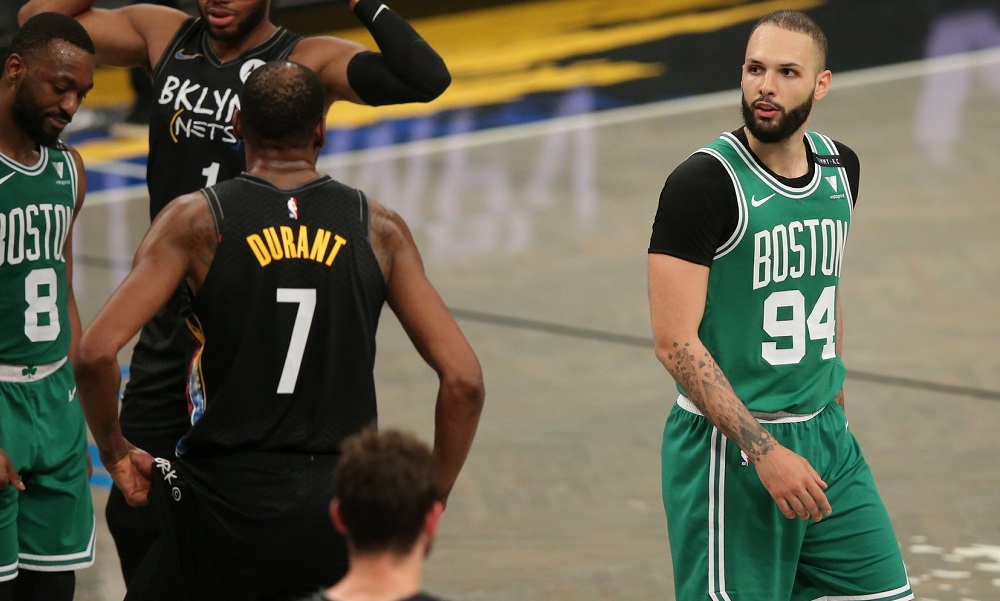 It got ugly in Brooklyn last night. Actually, it was just about everything most people expected – and that includes even the most green-blooded Celtics fans.

It must be nice to be Joe Harris. He’s making $16 million this season to play on a loaded team where not one, not two, but three stars draw all the attention of the defense, allowing Joe the freedom to spot up at the three-point arc. And he’s pretty, pretty good at making shots from there.

Harris was 7 of 10 from deep, 6 makes in the first half when the Nets blew the game open. All but one of his 10 attempts were catch-and-shoot. One other attempt was a pull-up three. Per NBA Stats, on four of his shots he was “open” (nearest defender 4-6 feet away); on five more he was “wide open” (nearest defender 6+ feet away). In other words, all he had to do was stand still, wait for Kyrie or KD or Harden to pass him the ball, and drain a shot unbothered by any Celtic. He might as well have been shooting layups in an empty gym.

Of all the things the Celtics know they need to do to have even a chance against the Nets, outside of Rob Williams' efforts, they're essentially doing none of them.

It's getting to the point where they might just bring in a position player to pitch in the second half.

This is true. The Celtics were too passive and never came close to matching Brooklyn’s energy. As noted above, the defense was pummeled, doing little to nothing to make the Nets uncomfortable. Brooklyn got their shots when and where they wanted them. In Game 1, the Nets were cold in the first half and ended the night with 104 points. In Game 2, they had 109 points after just three quarters.

The offense was no better. The Celtics shot just 42.4% and were 12 of 34 (35.3%) from downtown. The percentage was poor because they failed to move the ball (23 assists compared to Brooklyn’s 31). The Nets are not one of the better defensive teams, but they don’t need to be if the Celtics don’t make them work on the defensive end.

Something you don't see often: Jayson Tatum was a team-worst -27 in the first half. Another miserable shooting half for him.

Overall, Tatum had one of his worst outings of the season. The Nets swarmed Tatum whenever he had the ball, holding him to 3 of 12 shooting and just 9 points. He had only 1 assist. His net rating was -28. And JT played only 21 minutes because he took a jab to the eye from Durant. That finished his night, and he didn’t even get a foul call. As of now (Wednesday afternoon), we don’t know yet his status for Game 3.

Coming into the series, the talent gap between the two teams was blatantly obvious. The only hope for Boston was to play with more effort, and if they could do that, most fans would be satisfied regardless of the outcome. They did that in Game 1 but not in Game 2, with some exceptions.

I love how hard Tristan Thompson is playing.

Marcus Smart had 19 points – weirdly, all of them in the third quarter, when he exploded for 5 triples in a vain effort to mount a comeback. Also, Evan Fournier had 16 points while making 4 of 5 from deep. But Fournier made a bigger contribution.

Fournier was called for a foul, and while he argued with the ref, Durant walked by and had something to say. If you read lips, you can catch some of Fournier’s NSFW reply.

Evan Fournier with some words for Kevin Durant: pic.twitter.com/svT7sNFVy1

The days of McHale clotheslining Rambis are long gone and never coming back, but that doesn’t mean players can’t get riled up. It’s the playoffs, these skirmishes are supposed to happen. Fournier standing up for himself was necessary, and a welcomed sight. We need to see more of this from the Celtics in Game 3 and beyond.