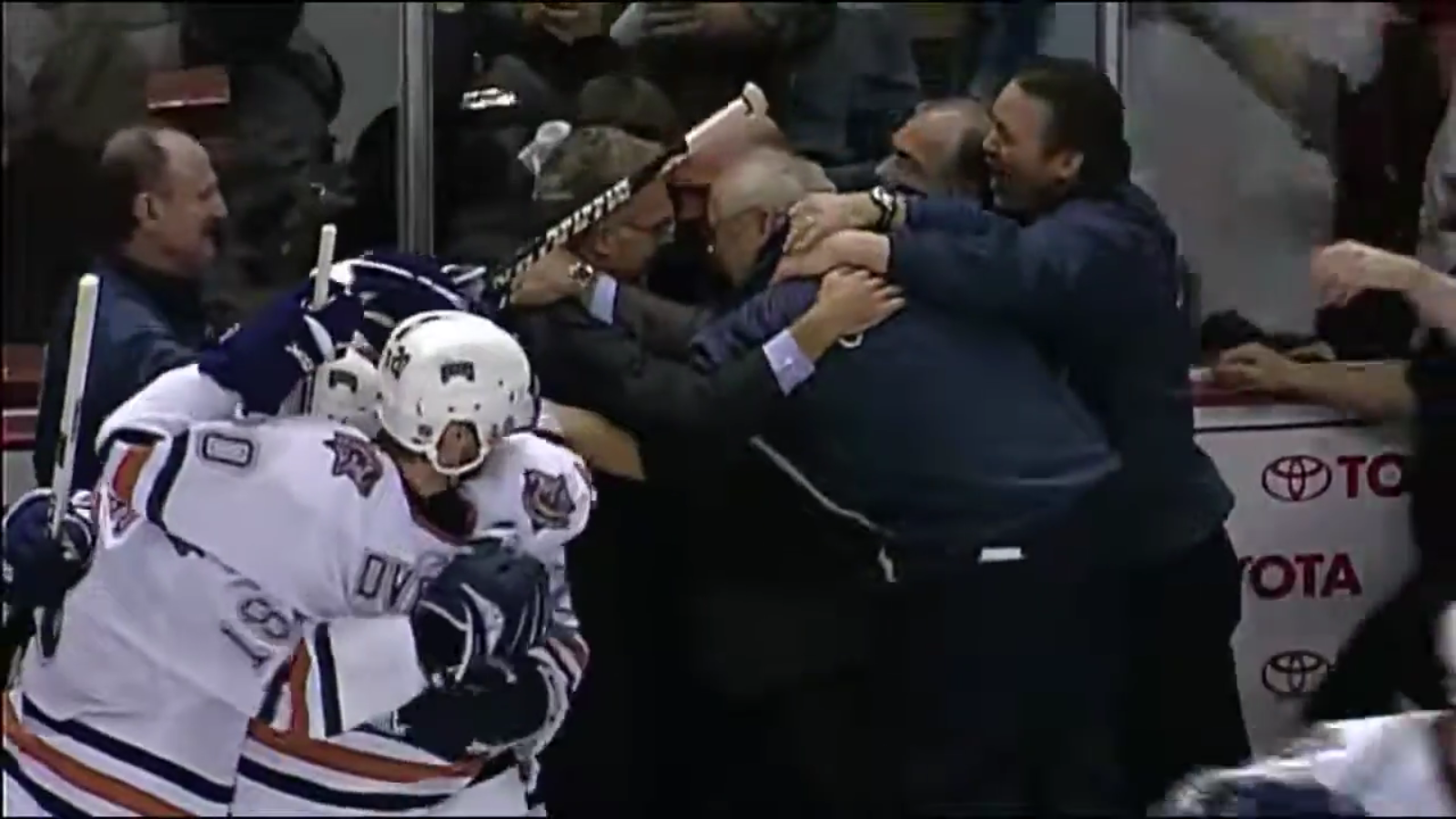 The Edmonton Oilers arrived back at Arrowhead Pond in Anaheim, California 15 years ago tonight with a chance to advance. After winning seven straight games, the Oilers saw their streak come to an end in Game 4 against the Ducks, dropping a 6-3 decision. Still, the Oilers were leading the series 3-1, and had already taken two games from the Ducks on their turf.

Game 5, on this night 15 years ago, was no different in it’s end result. What was different, however, was the start to this affair.

The Ducks actually opened the scoring in this game, getting a powerplay marker 7:30 into the contest. Teemu Selanne took the puck along the far wall and played it back to Francois Beauchemin at the point. Beauchemin found Scott Niedermayer at the near point, then walked to the middle where he took the return feed.

Beauchemin glided toward the near point, then turned and stepped into a booming slap shot. His shot went through traffic and cleanly beat Dwayne Roloson for the Ducks second powerplay goal in their last 21 tries against the Oilers.

Anaheim took that lead into the intermission, but quickly gave it up in the second period.

Ethan Moreau and Rem Murray played catch with the puck while on the cycle deep in the Ducks zone. Murray dropped a pass for Moreau, who quickly darted behind the Anaheim goal and attempted a wraparound. With multiple bodies in the crease, Moreau was able to tuck the puck home at 3:42 to get the Oilers even at 1.

Just as an Oiler powerplay was set to expire, Marc-Andre Bergeron fired a weak wrister towards the goal from the blueline. The shot clipped Raffi Torres in the slot, and bounced by Jean-Sebastien Giguere at 8:31 of the second period.

Edmonton was now in the driver’s seat. The team was one win away from a berth in the Stanley Cup Final, and held a 2-1 lead after forty minutes of play. All that was left now was to protect the lead.

The Ducks got a great chance in the opening minutes of the third period, as Todd Marchant forced a turnover deep in Edmonton’s zone, but Rob Niedermayer couldn’t finish off the play.

With just under ten minutes to play, the Ducks went on the powerplay, but came up empty handed. Scott Niedermayer had a great look from the slot, but pushed the puck wide with 8:40 remaining.

The Ducks went back to the skater advantage in the game’s final moments, desperate to tie. The Oilers played it well, however, and kept the Ducks from any real scoring chances. Shawn Horcoff’s diving clear with seconds remaining was the icing on the cake.

The Oilers, for the third time in three tries in this series, walked away from the Arrowhead Pond with a victory. Their 2-1 win in Game 5 gave them a 4-1 series victory, and the Oilers were off to the Stanley Cup Final for the first time since 1990.

They would wait a few days for their opponent, heading to New York to use the Rangers facility while the Buffalo Sabres and Carolina Hurricanes played a full seven games. Once the dust settled, it was Carolina and Edmonton ready to do battle in the final.