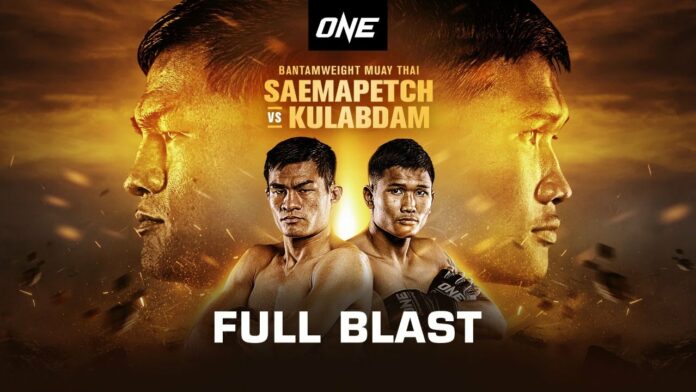 ONE Championship returned to action on May 28th with ONE: Full Blast, another pre-taped event that went to air in place of ONE: Empower, the landmark all-female card that has been postponed due to COVID-19 difficulties. The new date for that card is still to be announced.

In the end, the main event was a brief affair. After a short feeling out process, Saemapetch folded Kulabdam with a straight left hand, leaving him writhing in pain on the canvas.

With the win, Saemapetch (123-16-1) has potentially positioned himself for a title rematch with longtime ONE Bantamweight Muay Thai Champion Nong-O Gaiyanghadao. The number one contender was unsuccessful in their previous encounter at ONE: Edge of Greatness in November 2020. His record now stands at 5-1 under the ONE banner.

Kulabdam (69-20-2) has now lost two in a row under the ONE banner, following his loss to Rodlek P.K. Saenchaimuaythaigym at ONE: A New Breed back in August. The 22-year-old has, however, reeled off a win back in his native Thailand since then, at the famed Lumpinee Stadium in Bangkok in December. His ONE record now stands at 2-3.

The rest of the card featured three MMA and one kickboxing contest.