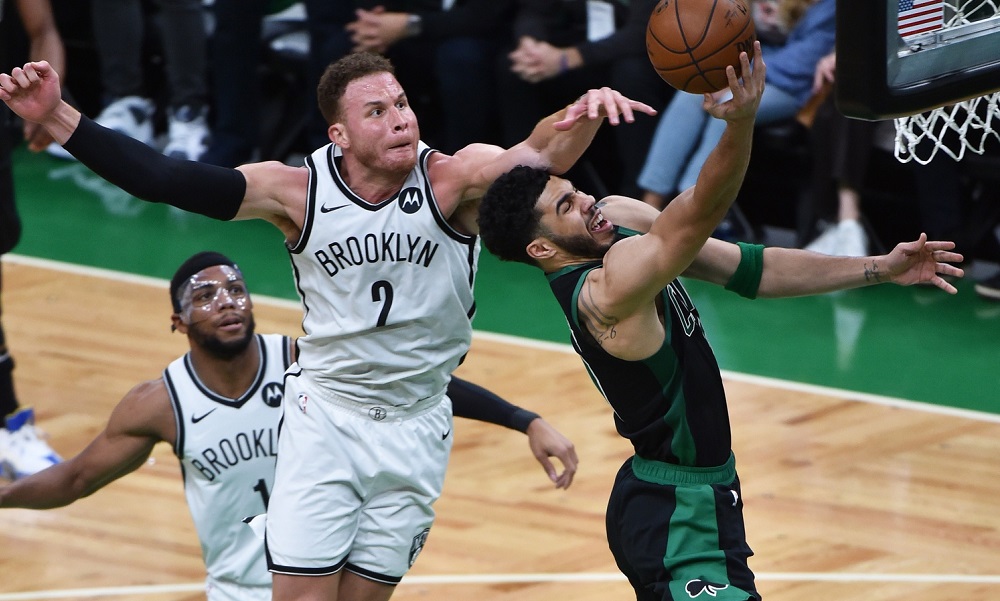 Have to wonder if Jayson Tatum heard one of the TV talking heads say this week that he would take Ja Morant over Boston’s young star.

… and I took that personal. pic.twitter.com/YZhrGbCsHu

Boston had given plenty of reasons to believe it would go out with a whimper, but it also had Jayson Tatum. And on Friday night, with the Celtics’ season seeming to be careening toward a rapid end, the All-Star forward erupted for 50 points and guided the Celtics to a 125-119 win that pulled them within 2-1 in this best-of-seven series.

“He’s so advanced for 23 years old,” Celtics coach Brad Stevens said. “I’ve said the word ‘special’. I don’t say that very often, obviously. He just has a unique ability to score the ball, to slither through seams, to find angles to score. But then also he’s got the vision to make every right read. He was super.” […]

The Nets often swarmed him with multiple defenders, but Tatum has shown during this dominant season that sometimes a defense’s approach makes no difference. Time and again he hunted switches involving either Nets center Blake Griffin, who cannot keep up, or Irving, who cannot match up. He mixed in daring drives to the rim with an array of jumpers, and Brooklyn had no answer.

This is now so routine that it feels normal – yet, at the same time, it’s unbelievable. Tatum has scored between 50 and 60 points four times in his last 22 games, including two straight home games (the play-in and Nets Game 3) with an even 50.

A common thread in these games has been JT getting to the foul line. This time he was 13 of 15 – just 2 of 2 in the first half, even though he attacked the rim often, then 11 of 13 in the second half, as his approach paid off. Tatum sometimes starts out slowly, so it’s a good sign when he’s hot early. His scoring by quarter this time was 13, 8, 19 and 10.

As thrilling as Tatum’s performance was, it might not even have been the best part of the evening. Instead, that would be watching these Celtics scrap for 48 minutes and claw their way back into this series. The first quarter was a sign that the Cs wouldn’t be surrendering: the Nets blasted out to a 19-4 lead, but Boston led, 33-32, when the quarter ended.

For once this season, the Celtics did all of the little things they needed to do. They took a huge punch from a superior opponent and didn’t wilt. They made mistakes that cost them the lead in the third quarter, and they didn’t revert to their old habits.

They stuck to the plan. They played hard. They ignored the bad stuff and moved on.

“We got no choice. Win or go home,” Marcus Smart said after the win. “We weren’t ready to go down three-oh, so we had to change our mindsets.”

Through the first three quarters, the Nets were 13 of 15 on free throws. In the fourth quarter alone, they went 14 of 16. You might say the officiating was suspect, but even that didn’t cause the Celtics to crumble.

It was a night reminiscent of the more glorious past few years of playoff games at the Garden, from Paul Pierce or Isaiah Thomas thrilling the crowd with critical baskets and Smart or Kevin Garnett or Tony Allen diving for loose balls or getting the defensive stop.

Brad Stevens said the Celtics were going to have to play with an edge to even compete with the Nets. Their Game 2 performance was putrid, as they allowed Joe Harris to score 16 points in seven first-quarter minutes, and then fell apart in the second half.

The outside focus over the past 72 hours was out the TD Garden crowd would react to Irving’s return, but inside the locker room, the Celtics focused on being the more imposing team and stop playing as if they were in awe of the Nets. It will be difficult to beat the Nets four times, but at least the Celtics proved they could beat Brooklyn at all.

Globe: Celtics played with emotion and physicality needed against the more talented Nets

All of us know this good feeling might vanish with Game 4 on Sunday night. That’s a reality when you’re facing a stacked squad like the Nets. However, we also know that the Celtics possess renewed hope, and a raucous home crowd ready to pack the Garden in the first game back with full attendance.

Can the Celtics put together two straight games that will “make us feel good”? There’s no better time to find out.

Related – MassLive: Jayson Tatum goes for playoff career-high 50 points, Celtics beat Nets 125-119 in Game 3 in Kyrie Irving’s return  |  How Celtics played with an edge in Game 3 win vs. Nets in NBA Playoffs as Boston ‘wasn’t ready to go down 3-0′

On Page 2: The supporting cast

Even with JT’s 50-piece, Boston needed – and got – clutch performances from many others.

“We don’t give a s— about that. At the end of the day, they put their socks on and their shoes on just like us. So, we’re not intimidated or anything like that.”

Those are the words of Celtics big man Tristan Thompson following Boston’s Game 1 loss to Brooklyn. He showed Friday night he wasn’t kidding.

Thompson had what undoubtedly was his best game as a Celtic in Game 3. The veteran was leaned on even more with Robert Williams exiting due to injury, and boy did he deliver. Thompson finished with 19 points to go with 13 rebounds, nine of which came on the offensive glass.

NBC Sports Boston: Thompson backs up his talk with Game 3 performance vs. Nets

Thompson was ferocious around the rim all night, not just ripping down rebounds, but powering them back up. He threw down a huge dunk off a rebound early in the fourth, when Boston was trying to prevent Brooklyn from gaining any momentum. This is the Thompson that Celtics fans remember from Cleveland, and the performance we expected to get regularly.

The Celtics might not get another performance like Friday’s from three by Marcus Smart (5-for-8) and Evan Fournier (4-for-7), but they probably won’t have to weather another 0-for-7 performance by Kemba Walker.

Smart was particularly solid and sent the TD Garden crowd into hysterics at one point by drawing a four-point play on Irving.

Smart’s offense was crucial. He scored 23 on super-efficient 8 of 11 shooting with 6 assists. When the Nets tied it at 75 mid-third quarter, Smart drilled two threes that ignited a 21-4 run. The Celtics never trailed again.

Romeo was so solid, even making a pair of triples.

Just about everything went right: Kemba Walker’s night aside, we can pick a player and there’s a good chance he played his role perfectly. Romeo Langford, Aaron Nesmith, Grant Williams off the bench, Evan Fournier and Tristan Thompson in the starting unit, they all played their roles about as well as they could.

“For our guys to come in and do exactly what those guys did to us in Game 2,” Marcus Smart said. “And that’s contributing, both ends of the floor, is exactly what we need and we got to continue that.”

Finally, Kemba (3 of 14 and 0 of 7 from the arc) couldn’t throw it in the ocean from a pier, but his 8th rebound of the night was ginormous, holding Brooklyn to one shot with 30 seconds left and the Cs clinging to a 6-point lead.

And, finally… Jaylen speaks out, Kyrie is quiet

As everyone knows, after Game 2 Kyrie Irving was asked about playing in front of Boston fans for the first time since he went to Brooklyn. With his answer, he successfully changed the subject from “how Kyrie left Boston” to “racism in Boston.” That brought three days of sometimes heated commentary from players, coaches, fans and media.

Many were wondering what Jaylen Brown’s thoughts might be, and he finally delivered them before last night’s game. Do yourself a favor and take five minutes to listen.

Jaylen Brown addressing Kyrie Irving's comments from earlier this week: "I think that systemic racism should be addressed in Boston and the United States. However, I do not like the manner it was brought up, in terms of centering it around a playoff game." pic.twitter.com/kO2zE3aA2c

Kyrie was booed early and often last night by the Garden’s limited crowd of about 5,000. There were no racial incidents reported, but there was a clear “Eff you, Kyrie” chant going on periodically. Did it affect him? He said no.

Kyrie Irving on the atmosphere in the Garden: "It's basketball. I've been in a few environments in my life…If it's nothing extra, I'm cool with it."

Of course he’d never concede that booing bothered him, but the fact is in 41 minutes Kyrie shot just 6 for 17 for 16 points and added just 2 assists. He also fouled Smart on a made three, leading to a four-point play. Maybe Kyrie will bounce back in Game 4, maybe he won’t, but for now, at least, he’s left himself open to shots like this:

Related – MassLive: Kyrie Irving reacts to TD Garden crowd in Game 3: ‘It was a great start to seeing what this environment’s gonna be like’

Globe: Kyrie Irving lit the fuse, and he was booed at the Garden, but that was about it