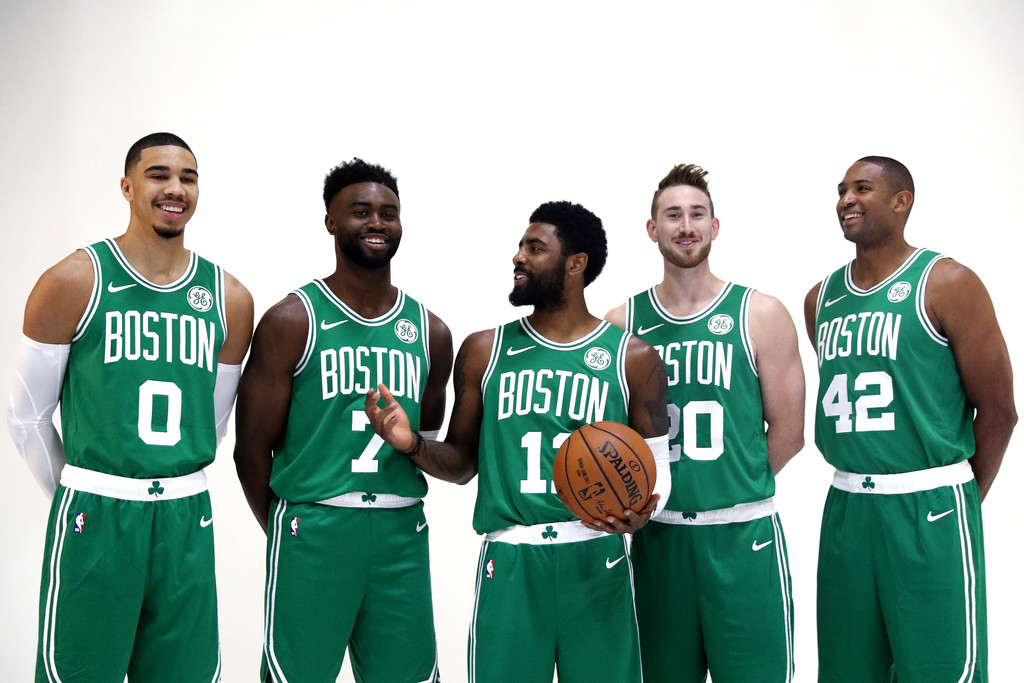 God pity them both! and pity us all,
Who vainly the dreams of youth recall.

For of all sad words of tongue or pen,
The saddest are these: “It might have been!”

Whittier, a Massachusetts native, did not have Celtics fans in mind when he penned words that are perhaps a bit too rhymy for our modern ears, but the sentiment is appropriate.

We find ourselves gazing at our seventh-seeded team, which is about to be dispatched by the Nets, whom the C’s fleeced in a trade almost eight years ago and which finished the season far abaft of the Sixers and Doc Rivers. Last year’s Finals teams were the Heat, who have won two titles since the C’s last title, and who had to rebuild from scratch after LeBron left them in a mess, and did so in less time than it took Boston who, arguably, planned their own rebuild, and the Lakers. LA did everything wrong, yet somehow managed to land both LeBron and Anthony Davis and then the franchise’s 17th championship, tying them with Boston.

Meanwhile, the Celtics can only say that they should have been there first.

They did things the right way. They hired the right coach (the Heat, as averse to making white collar moves as the C’s and Spurs are an exception here). They made the team, at least for a while, an attractive destination for free agents. They drafted well.

Look at the other teams that have gone farther than the Celtics: The Sixers are on their third GMs and their second coach, the Lakers are on their fourth GM (I think? It’s three at least, and should we consider Rich Paul a GM now?) and I don’t even know how many coaches—at least four—and the Nets are on their sixth coach and second or third GM, and none of these teams had anything approaching a concrete plan to follow. They stumbled into the success they’ve enjoyed and are living proof that it’s better to be lucky than good. That the Sixers blew up their team in 2012 with the express goal of hiring Doc Rivers to lead them to the best record in the East in 2020 is as laughable as Billy King’s claim that he traded three picks and a swap in order to land Kevin Durant.

All of this leaves me deeply frustrated as a Celtics fan.

But, again, not with the 2020/21 Celtics. Not with this year’s team. Or rather, I should say, I’m frustrated that injuries kept the C’s from developing their young players, by forcing them into situation after situation where they were going to fail—and their collective futility against a superior Nets team in game 4 is the season in a nutshell for guys like Grant Williams, Aaron Nesmith and Romeo Langford, who probably would have made much more progress if they had been matched up with the opposition’s second unit.

I’m frustrated that this season’s injuries kept Kemba, Jaylen and Jayson from getting into anything even remotely resembling a rhythm—over the course of a 72 game season, Walker, Jaylen and Jayson played together in only 29 games, and due to the variety of injuries and illnesses affecting the rest of the team, they only averaged 20.4 minutes on court together during those 29 games.

I’m frustrated that this season was the first time in years that the best five players on the C’s team fit into a single lineup: In traditional terms, Walker-Smart-Brown-Tatum-Williams fit neatly into PG-SG-SF-PF-C categories. The C’s could finally run their best players on court together.

And thanks to injuries, that amounted to ten regular season games, and about 111 minutes total.

But that’s not the players’ fault. None of these guys are out there trying to get injured.

I’m also frustrated by and more than a little pissed off at a sizable chunk of C’s fans.

Fans who say stuff like “If the Celtics lose tonight, playing Kemba or Rob in Game 5 would seem incredibly short-sighted. You can’t risk Kemba turning a now injury into offseason surgery that ends any thought of trades.”

Kemba was an All-Star last season. But now, after two years, he’s reached the point in his contract where Celtics fans of all stripes want him tossed overboard. Many C’s fans apparently have exactly two moods when it comes to free agents: Honeymoon happiness and hatred.

By the time a big-time C’s free agent signing hits the middle of his second year at the latest, guys are ready to ditch him and they freely say so.

This fickle attitude coming from fans who tell themselves loudly and often that they are the best in the league is hardly the kind of stuff that makes guys want to re-sign with the team, creating a self-fulfilling prophecy where guys get tired of fans openly questioning their value and leave, leading fans to further insistence that free agents should be ditched before they leave.

Celtic fans who have put a one year probation on Ainge and Stevens, or who say that both should be summarily fired as soon as this season is over also frustrate me.

These people are incredibly short-sighted. You never fire a guy unless you’ve got a better guy lined up.

Of course, the reasoning behind people who want Stevens and Ainge fired is that you “can’t waste the Jays.”

This irritates me because Ainge went out on a limb by picking Jayson Tatum and ESPECIALLY Jaylen Brown. Season ticket holders in the Garden booed the Jaylen Brown pick.

And the revisionist history is that fans were booing the pick because they wanted the team to trade the pick for someone else, but they were booing that pick because the ‘consensus’ was that there were only two decent players in that draft. Ben Simmons and Brandon Ingram. By now it’s an open question whether Simmons is a better player than Brown and Ingram sure as hell isn’t.

Ainge picked Jaylen, and the following year Ainge traded out of the number one spot to pick Jayson Tatum—who is easily the best player from that draft.

But somehow due to a year that was the worst that I can recall as a Celtic fan in terms of injury and illness, Ainge is too stupid to shepherd the Jays through their prime years and so must go.

The same reasoning goes with Brad Stevens. Look at Ben Simmons in 2021. His game has marginally expanded from what it was when he was a rookie. He’s an effing PG who has NO outside game whatsoever. He’s a guy who’s almost seven feet tall who averaged 8.1 rebounds per game his rookie year and whose career rebounding average is 8.1 rebounds per game. He averaged 8.2 assists per game as a rookie and his career average is 7.7. He has done diddly squat to improve as a player. This is a guy who has the physical skills to be a combination of Kevin Durant and Magic Johnson and what do the Sixers have? A good basketball player, but not a great one.

Do you think that Stevens has had nothing to do with the improvements that both Tatum and especially Brown have made as players? Does anyone in the ‘fire Stevens’ and ‘fire Ainge’ camp think that these guys would have developed to the extent that they have if their coach had been Brett Brown? Or Doc Rivers?

What Ainge and Stevens have done is, by and large, remarkable.

And that brings us around to what I’m really frustrated about.

Now fortunately, I was busy being first engaged and then a newlywed during that season, so it didn’t sting as much as it could have.

But I can also say that I’m fortunate in that I wasn’t distracted during a season that was worth following.

That pic in the header?

That should be what pisses off Celtic fans.

Not this goddamned year of plague and injury.

It should be the year when they had those five guys and a reasonable measure of health—yeah Gordo didn’t get his legs under him until the year was well along, but still. Look at that lineup and look at how many games those guys played.

When that season blew up in the second round of the playoffs, playoffs that were as wide open as any in recent memory, I was pissed. I was as pissed as I’ve been in years because I knew that the C’s had squandered the opportunity of a lifetime.

After that season blew up, I pointed out that Larry Bird was still angry about the way the C’s quit on Bill Fitch three decades after it had happened. And he had every right to be. You aren’t guaranteed a second chance.

I’m sure, to kids like Jaylen and Jayson, who had already been to the ECF twice and once before, the future seemed full of additional chances such that torpedoing the 2019 season through a lack of effort—a lack of effort to get along and a lack of effort to improve–and the baseless arrogance of accidentally successful youth, wasn’t a big deal. But I hope that the past two years have taught them the hard lesson that you aren’t guaranteed a damn thing. They came back motivated in 2020 and lost Hayward at a crucial moment to a nasty ankle sprain. They came back motivated in 2021 and were already behind the eight-ball because Hayward was gone, and then they couldn’t stay healthy as a team.

You ain’t guaranteed anything.

They had everything they needed to destroy the league except maturity.

And you can say that Stevens could’ve done a better job, but you know what?

If you’re going to get paid more money than your boss, then you damn well better be able to find your own motivation to do the right thing. You can’t draw more money in a season than I’ll make in a lifetime and then turn around and blame the coach for failing to ‘motivate you’ or failing to force you to get along with other people. Your game, your role in the success or failure of the team, that’s entirely on you. If you listen to the coach, that’s on you.

But if you don’t listen to the coach, it sure as hell isn’t his fault for failing to find the magical combination of words that will make you want to do what you’re paid to do.

And you know what? The money ain’t even the issue here.

People are people, and that means that if it’s a flimsy excuse for you, it’s a flimsy excuse for everyone. I believe in universal laws of conduct. Before you do something or excuse something ask yourself what would happen if everyone acted the same way. You can’t blame your own failure to do your job properly on your boss’s failure to ‘motivate’ you. And if you can’t do that, nobody can.

So yeah. Tie a ribbon and put a goddamn bow on this goddamn season tonight and get it over with. Because all it does is remind me of how much the C’s could have done and how much the C’s did to themselves in 2019.