Your Morning Dump… Where perhaps Dame Lillard can help the Celtics, one way or another 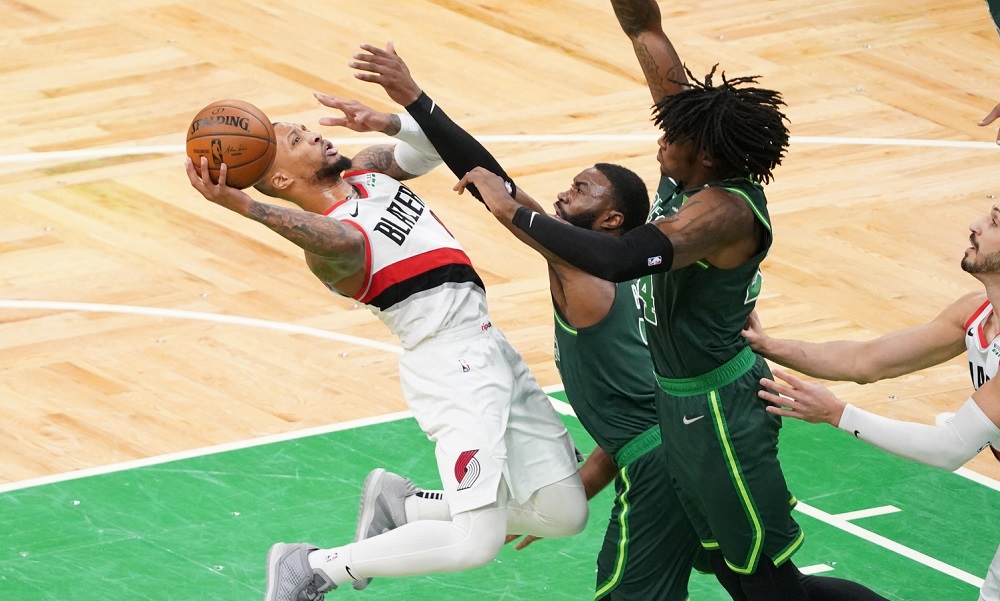 Your Morning Dump… Where perhaps Dame Lillard can help the Celtics, one way or another

Hey @Dame_Lillard it’s time brother! You have done enough for that organization bro! It’s time for you to take your talents else where! The @Lakers or @celtics would be a great fit for you. Carry on… IMOP

The Celtics could sure use a dramatic upgrade like acquiring Damian Lillard, so thank you, Perk, for suggesting this to him (although next time don’t mention the Lakers).

There is probably no chance of it happening, however. Dame has been completely loyal to Portland, is signed for the next four years, and has emphasized how committed he is to the Blazers. But what if that changes? What if he’s tired of losing? What if he thinks the East is easier?

Brian Robb wrote about it:

The 30-year-old Lillard wasn’t ready to look ahead to his own future or the team’s outlook but has spoken about his desire to play for a contender in recent years. The six-time All-Star has made it to the Conference Finals twice in his career in Portland but was swept on both occasions in lopsided series. […]

That leaves Portland’s front office in a challenging spot when it comes to keeping Lillard happy…Lillard may be growing impatient with his supporting cast at this point of his career as he enters the tail end of his prime. He hasn’t played with an All-Star since 2015 when LaMarcus Aldridge departed for San Antonio. […]

The only way things become interesting from a Celtics standpoint is if Lillard makes a push to go elsewhere. That feels highly unlikely after he inked a long extension last year but he’s at a point where the Blazers would likely respect his wishes if he wanted to try elsewhere. The Celtics have the young talent (Jaylen Brown) to get into those trade negotiations if they do surface in the next year or two. Whether or not they would choose to consider moving Brown as he enters his prime for a perennial All-Star on the wrong side of 30 is a fascinating question for Brad Stevens to debate in his new role.

Again, there’s no story here. But we can ask questions, just like other fans do about Jayson Tatum. We can dream. Usually our target is Tatum’s good buddy, Bradley Beal, who we hope will get sick of losing in D.C. and want to come to Boston. The Celtics would instantly become legit contenders if they snagged either Lillard or Beal.

Like the Celtics, Portland has a coaching vacancy after Terry Stotts was let go yesterday. So, on second thought, maybe the best thing Dame can do for the Celtics is keep Jason Kidd the hell away from Boston.

Jason Kidd — who was previously a head coach in Brooklyn and Milwaukee — is expected to interview for the Boston Celtics head coach opening and is expected to be a top target of the Portland Trail …​ https://t.co/4Igyw5gdaJ

Portland Trail Blazers superstar Damian Lillard tells @YahooSports his preference to be the next head coach of the franchise is Jason Kidd: “[He’s] the guy I want.” https://t.co/xzeI7lf3vn

Exclusive comments from Damian Lillard and more on @TheAthletic: https://t.co/NcU6DoUCK0

The rumors that Kidd is a candidate for the Celtics job make no sense. Roughly 100% of Boston fans on Twitter hate the idea, because Kidd is not just a terrible person but also a failure as a coach in Brooklyn and Milwaukee.

So let’s hope Kidd gets the Blazers job, even if it makes Dame stay in Portland – because when they lose even more, becoming Tatum’s teammate might eventually look like a great option.

On Page 2: Easing the pain

If you’re like me, your two favorite teams are the Celtics and whoever is playing the Lakers. In that light, yesterday was a great day to be on Twitter, because so many NBA fans were mocking the now ex-champions. It’s rare for a defending champ to be eliminated in their next series, but that’s what happened to LeBron’s squad. Many, many people were enjoying it, and thanking the Phoenix Suns for getting it done.

Truth be told, though, most of the bubble “survivors” suffered a similar fate, including the Cs.

“The bubble — as much as I enjoyed it, as much as the NBA did a great job — it was a lot,” Tatum said March 7. “I think that’s why the league has kind of been so up and down this year. I think the bubble has a large part to do with that, especially at the beginning of the season with everybody just trying to get their wind back, trying to get back in shape and everything like that.” […]

Three of the four conference finalist teams were eliminated in the first round of the playoffs. Interestingly, all three were low seeds in their conferences because of injuries as the Celtics and Lakers finished No. 7 and in the play-in tourney, while the Heat were No. 6. The Nuggets are still alive, but lose firepower without Murray.

MassLive: Celtics, Heat and Lakers all out of NBA Playoffs as teams who made deep runs in bubble endured unique hardships

So it was a tough season for both LA and Boston. The silver lining: the pain of the Celtics losing in the first round is greatly eased by LA suffering the same fate.

Without the Lakers, watching the playoffs just became much more enjoyable. The Nets and Sixers are the only true villains remaining now, and they can’t both make the Finals. I’ll be pulling for Bucks vs. Suns.

And, finally… The Hoodie’s endorsement

“When you’re part of a sport like Brad is or like I’ve been…there’s a lot of lines that run together there,” Belichick explained. “You can’t be the head coach and not be aware of contracts and acquisitions and things like that. Again, I don’t know exactly how they’re set up, and each situation’s a little bit different. But Brad has enough experience in basketball and with the Celtics and with the NBA to handle all the things that he’ll need to be handling.”

If Belichick isn’t just being kind – and when has he ever? – then this is encouraging. In Bill we trust.

Boston Sports Journal: Karalis: A complete look back at Danny Ainge’s run in Boston, and where he leaves the Celtics