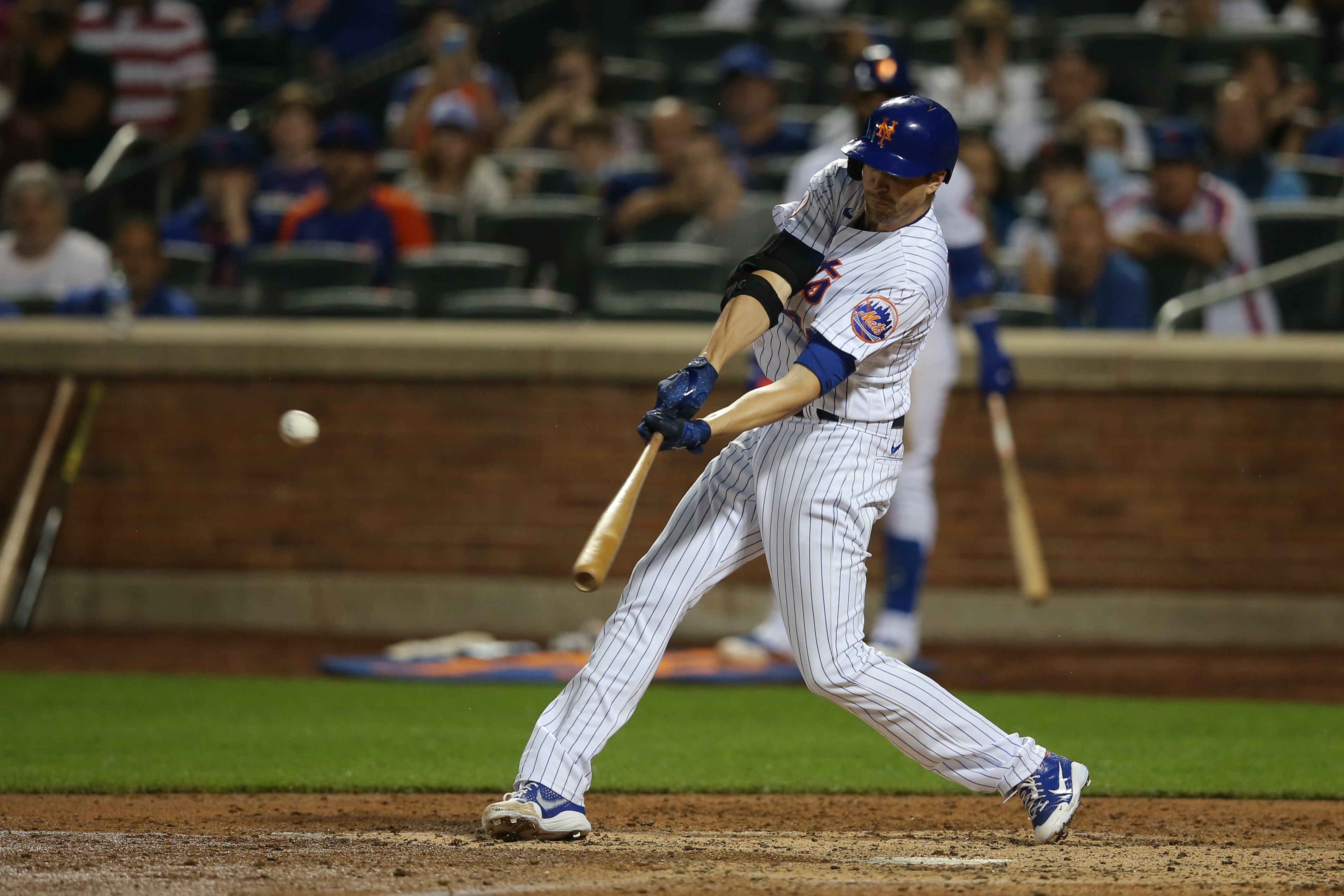 The obvious storyline weaving through Friday’s 3-2 victory over San Diego was how good Jacob deGrom is and continues to be. He threw six scoreless, giving up one hit, and striking out ten. Oh and by the way, drove in the final two Mets runs with a single off of a Cy Young award winning left-hander. deGrom now has an ERA of 0.56, a WHIP of 0.53, 103 strikeouts, and eight walks.

The one thing that kept running through my mind watching deGrom is that we constantly discuss the what-ifs of the Mets franchise … especially pitchers like Doc Gooden and, in conversations that have flared up more recently, Matt Harvey. Jacob deGrom is the guy who answers the what ifs. What if Doc had stayed clean? What if Harvey hadn’t had the Thoracic Outlet Syndrome? Jacob deGrom is the answer. And that’s why people advise that we should be enjoying this. Because Jacob is the answer.

Other than that, I’ll let others discuss how good Jacob is because I’ve run out of platitudes.

I'm sure what deGrom just did to Fernando Tatis Jr. is against the Geneva Conventions.

deGrom is the best pitcher on earth #Mets #Padres

Lol Jacob deGrom with a two-run single. He has allowed four earned runs this season and driven in five.

He’s got more RBI’s then the 4 runs he has surrendered on the year. Someone come up the last that time this has happened this far into the year? Insane. Flat insane. #deGrom #lgm

But even the answer has questions, such as the one that has been nagging his elbow, as he left the game after six innings and 80 pitches due to tendonitis with his right flexor. That’s his elbow, to you and me. In his post game newser (yes, I watched tonight), deGrom said that this had been bothering him since last week, and that he anticipates being out there in his next scheduled start in five days. I’m almost glad that he said that this isn’t anything new, as I had a fleeting thought that this soreness may have been caused by all the sliders he threw against the Padres. But the fact that he was already managing this and that he still was comfortable throwing as many sliders as he did is very encouraging.

Miguel Castro came in for deGrom in the 7th and gave up a two run HR to Jake Cronenworth, but the rest of the bullpen picked up for him. Seth Lugo came in to get the final out of the 7th, and then Aaron Loup got the first two outs in the 8th after giving up a single to Ha-Seong Kim. But the second out hit him near the shoulder, so in came Edwin Diaz for the four out save. 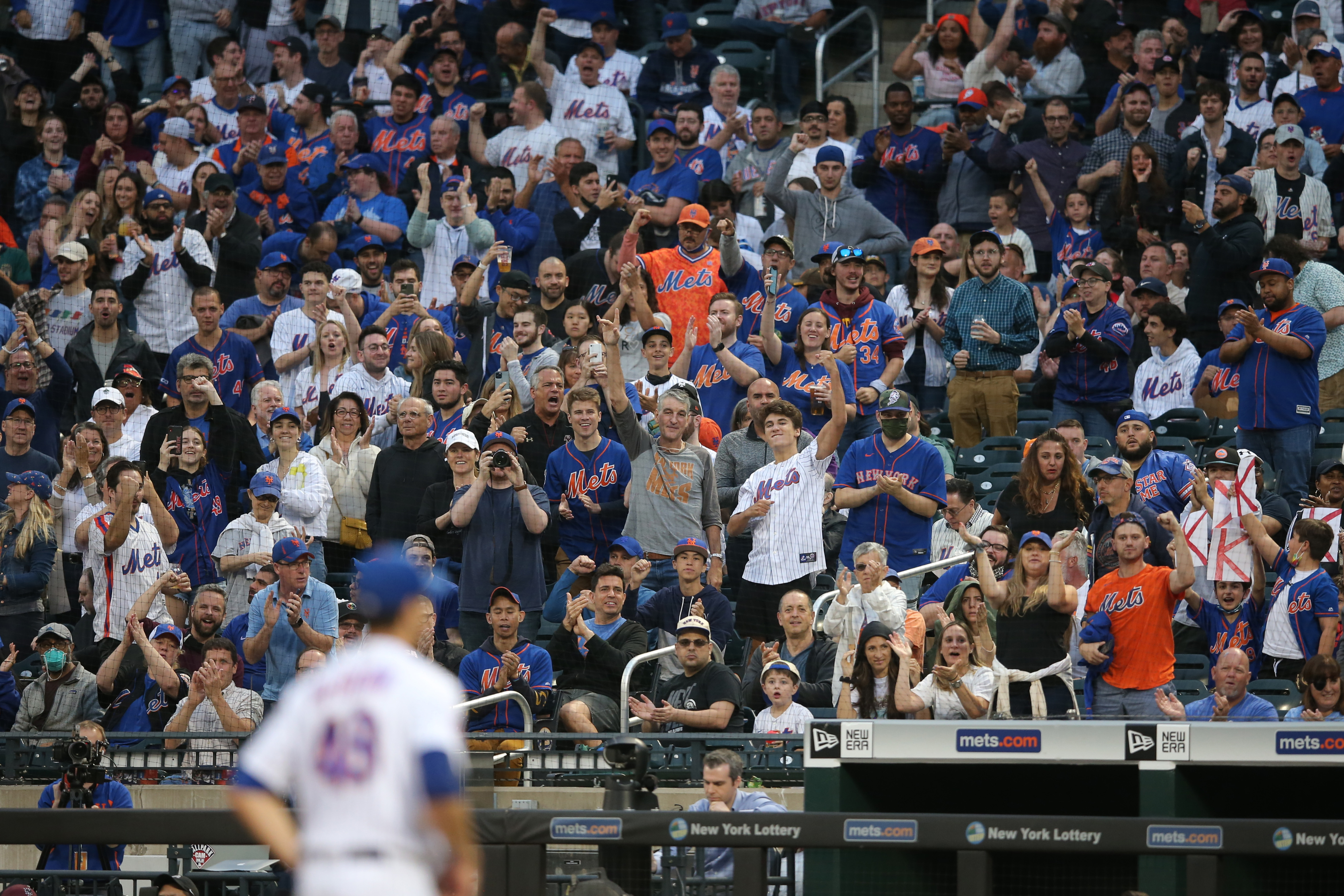 Two things to note here: Friday was the first game where the capacity was raised for New York ballparks after the COVID numbers have dropped while the vaccinations has been raised. So Citi Field had an electricity that was apparent even through the television. But even without that backdrop,  the moment in a vacuum hit me while watching the 9th inning: This was practically a playoff game. It had playoff intensity between two teams that might very well run into each other in October. Not only that, but even with Edwin Diaz facing the heart of the Padres order, I was confident that the Mets were going to come out with a victory. Diaz faced Fernando Tatis Jr., Cronenworth, and Manny Machado. And I wasn’t worried. Even after Machado looped a two out single I still wasn’t worried, even as the ghost of 2015, Eric Hosmer, came into the game as a pinch hitter. There was no doubt in my mind the Mets were going to win.

But then Hosmer lined an 0-1 fastball down the line. That worried me.

But it sure as heck didn’t worry Diaz, and it didn’t seem to worry the 30,000 plus at Citi Field, as Hosmer would pop up to end the game. The Mets are now four games in front in the N.L. East, and of the seven games the Mets have with the Padres, they’re up 3-2 so far. Thinking about this as a playoff series, the Mets would be holding their own very nicely. A lot of people, myself included, were worried about how the Mets would fare in these seven, and the worst case scenario now is 3-4, which at this moment is not terrible especially when you consider that the Mets aren’t anywhere near full strength.

I’m actually more worried about my growing confidence in this franchise than I am about Jacob deGrom’s elbow. I mean, what world am I living in?