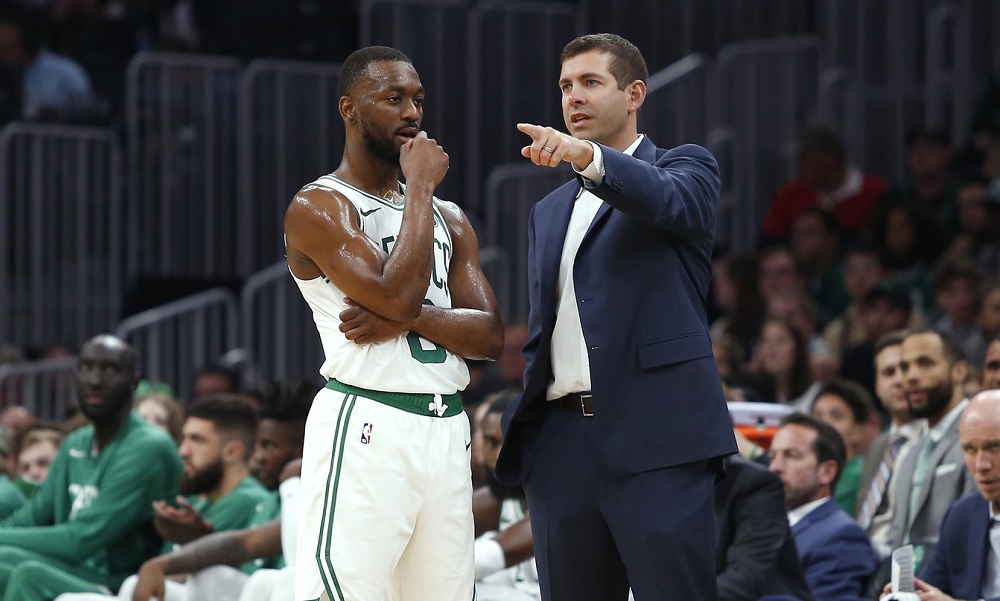 Kemba Walker Appreciation Post: Phenomenal teammate and regarded as one of the nicest guys on the planet. Went from All-Star to understudy to Tatum/Brown and not only didn't complain but supported their growth. Worth the money when healthy but couldn't stay on the floor. #Celtics

It’s a shame that Kemba’s time in green wasn’t more successful. He couldn’t stay healthy, but he did and said everything right, and was the perfect antidote to the bad taste left by his predecessor. His positive attitude and constant smile made an impact.

One of the best teammates I’ve ever had! Fam for life! @KembaWalker pic.twitter.com/LgmJvnKE9v

Let the record show that Kemba’s final game in a Boston uniform was Game 3 in the first round vs. Brooklyn, which was Jayson Tatum’s 50-point masterpiece and the Celtics’ only win of this postseason. Kemba shot just 3 of 14 and was dreadful from the arc at 0 of 7. As brilliant as Kemba could be, these types of results happened too often. Plus, he couldn’t play Games 4 and 5.

The Celtics had to feel Walker would not return to form by next season, and they never addressed the question of whether he would be able to play in back-to-back games in 2021-22.

And while the club spent all season preparing Walker to be healthy for the playoffs, he missed the final two games of the Brooklyn series with a bone bruise in that same left knee, unrelated to the previous injury.

Durability was a factor, and perhaps the Celtics would have been more patient had Walker not been owed $73 million over the next two years, if he opts into the final year of his contract in 2022-23. That was too much salary for the Celtics to bear for a player with such an uncertain future.

There are significant financial benefits to Kemba’s departure and the arrival of Al Horford and Moses Brown.

Here's some quick thoughts, after time to process:
-It's Walker for Horford +$9M in 2021 cap/tax flexibility. That's not bad.
-It's 16 for Brown. That's pretty good. Brown is good Rob Williams insurance (injury & contract-wise)
-Boston now has more cap/tax flexibility in 2022 too

Celtics save $9 million in salary between Kemba + Al Horford next season.

Horford’s 2022-23 salary is only partially guaranteed, which gives the Celtics a bunch of options with how to proceed.

Essentially, path to adding a new third star is a bit easier

While it doesn’t make them more competitive at face value, moving on from Walker gives them more flexibility to shuffle the deck moving forward. Horford is 35, but should enter next season well-rested and is owed far less money over the next two seasons, with $27 million guaranteed next year and a partial $14.5 million guarantee for 2022-23. (In other words, Boston saves more than $30 million here). While it may be hard to deal Horford again, he also helps the Celtics address the center position, which has been something of a revolving door since he left. Moses Brown flashed signs of real development last year and comes on an extremely inexpensive contract, giving Boston another option at the five, with the promising Robert Williams figuring to inherit a larger chunk of minutes to start next season. What this means for veteran Tristan Thompson, entering the final year of his deal, is unclear.

The good news on the court is that Brad is moving swiftly to reshape Boston’s roster, which everyone knew was necessary. While the Celtics were limited last season by the constant injuries, they also didn’t have enough talent in the right places.

Better on-court fit: Even when Kemba Walker was healthy, the offensive fit with Jaylen Brown and Jayson Tatum last season was not great. Boston played their best basketball of the season before Walker returned from his knee injury. His efficiency was lackluster for his high volume of shooting and his defensive limitations were more pronounced than ever due to his size and knee issues.

Boston moves out Walker and addresses in a greater area of need for the roster with a stretch shooting big. The Celtics know that Horford fits well offensively with Brown and Tatum given the success of that trio in past years. While Horford’s ability has declined with age, he still put together a productive year for Oklahoma City in 27 games, averaging 14.2 points and 6.7 rebounds per game while knocking down 36.8 percent of his 3s.

Ultimately, signing Walker was a bit of a knee-jerk reaction after watching Kyrie Irving and, ironically, Al Horford depart after a tumultuous 2019 season. When Walker started experiencing knee issues in January 2020, Tatum surged from All-Star to All-NBA, and Jaylen Brown started his own All-Star ascension soon after in the bubble. With the Jays needing the ball in their hands more, a high-usage, pick-and-roll heavy point guard was no longer an ideal fit for the Celtics. Walker’s lack of size complicated matters as well, though he tried hard to compensate on the defensive end. Ultimately, a move was needed and the Celtics moved quick to try to maximize the benefits.

This deal is not without risk. If Walker, in a more normally paced season, is able to get back to the sort of player he was in Charlotte (or even early in his Boston tenure), then he can be a valuable trade asset that might be able to fetch the Thunder even more draft capital down the road.

In the end, it’s too bad having Kemba didn’t work out, just like it’s too bad Hayward didn’t work out, and Kyrie didn’t work out – but now there’s a second chance to make it work with Horford. Remember that Horford’s three seasons in Boston were the best stretch the Celtics had during Brad’s coaching tenure. They won 53, 55 and 49 games and made the conference finals twice. That’s one reason to be optimistic as we wait for more moves from “Trader Brad.”

The most pressing of those moves is hiring a new coach. A quick update on the search:

And what about the newest candidate?

Per league source: Celtics have "three or four" strong coaching candidates, but Rick Carlisle isn't considered one of them.

That’s cool. As Rich Jensen has pointed out, Carlisle is sort of old at age 61. And there’s this:

That’s right, since winning the Finals in 2011, Carlisle’s Dallas teams have missed the playoffs four times and been eliminated in the first round six times. This year’s Mavs, led by all-NBA stud Luka Doncic, took a 2-0 lead by beating the Clippers twice in LA, and still managed to be eliminated in seven games. So, despite Carlisle being a former Celtic, it’s just as well that Brad is passing on him.

The Athletic: Kemba Walker traded to Oklahoma City: Instant grades for Celtics and Thunder on a good deal for both sides  |  Kemba Walker’s out, Al Horford’s in and Brad Stevens has a lot of work left to do  |  Hollinger: Brad Stevens’ first deal as Celtics GM opens question of what’s next

On Page 2: Seems Al is here to stay

Some observers were thinking that the Celtics acquired Horford with intentions to trade him elsewhere, but it appears not. The Celtics went above and beyond on social media to roll out the red carpet for their old/new big man, including a hype video. Would they do all that if they didn’t plan to keep him on?

Guess who's back 😏☘️ pic.twitter.com/CH2kyp9MyX

Bonus: Tweeter extraordinaire and Al’s sister Anna is back in the Boston fan base.

And, finally… The Olympics

When news of Tatum’s interest in Team USA first emerged, my reaction was no, he should rest up over the summer and not risk injury. But I’ve changed my mind, because the exposure of young JT to the basketball world could be crucial to his future. Tatum wants to be the next Kobe, his idol, and it’s possible that playing on Team USA will send him in that direction – at least in terms of popularity and general exposure.

As Nicole Yang said on a recent “Gino Time” podcast, with the older, most established NBA stars not participating in this year’s Olympics, Tatum has an opportunity to become the face of USA Basketball. And he’ll have the chance to play with his lifelong friend, Bradley Beal. Perhaps the topic of teaming up in Boston will be discussed at some point.

Tatum will also be the first Celtic since Larry Bird to compete in the Olympics, so you go Jayson – Celtics fans around the world will be rooting for you.