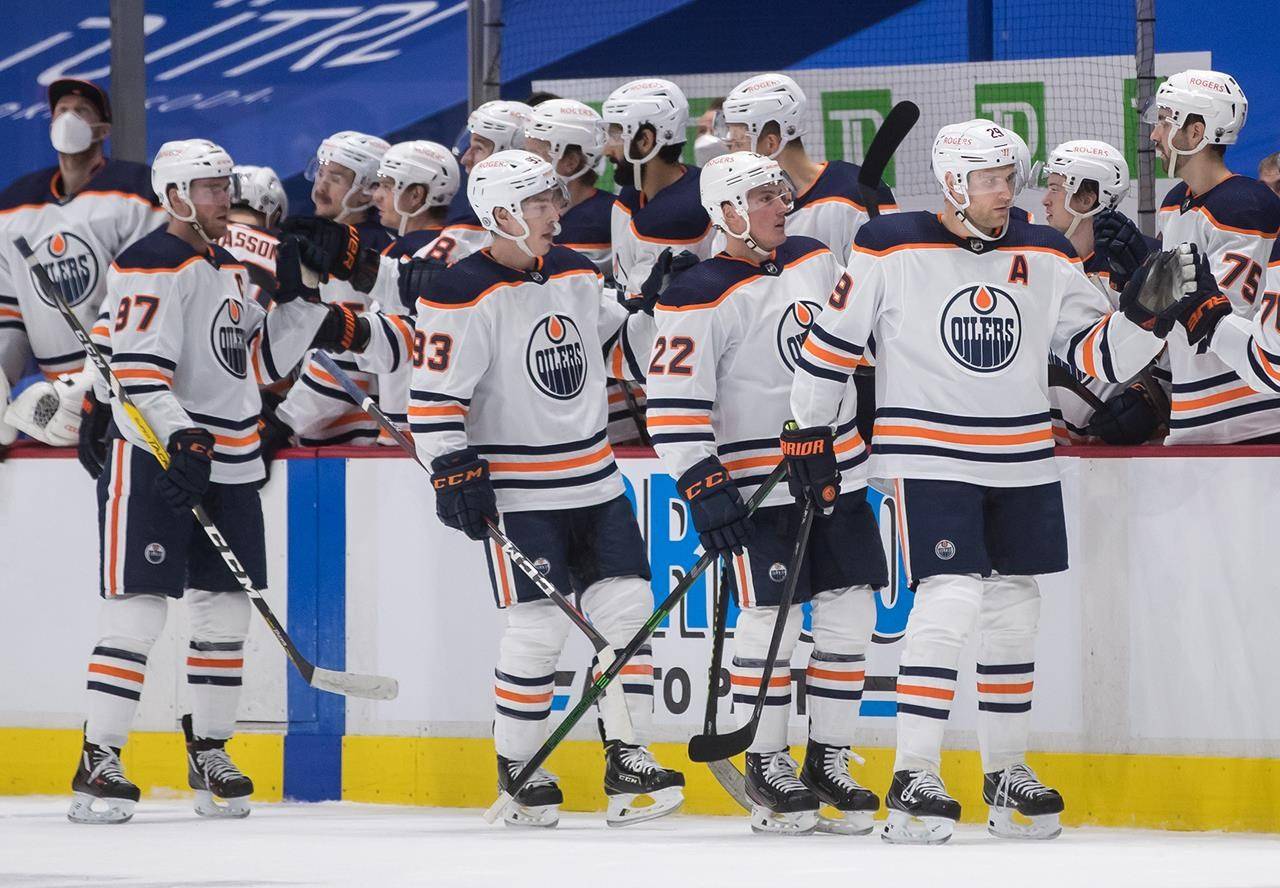 One month from today, the 2021 NHL Entry Draft will take place. It’ll be the second major event of the 2021 off-season, coming just two days after the Seattle Kraken’s expansion draft. Five days after the first round of the NHL Draft, the free agent period will open up.

The Oilers have ample cap space, plenty of needs, and some key pending free agents. Over the next roughly five weeks, decisions will need to be made by General Manager Ken Holland. In fact, Oiler fans can expect to hear rumblings sooner rather than later. There is plenty of business to tend to, and less time than you think to get everything done.

Veteran goaltender Mike Smith is a pending free agent, but for all intents and purposes is not on the same level of decision as defensemen Tyson Barrie and Adam Larsson and forward Ryan Nugent-Hopkins. There are two reasons for that.

One, we know Holland wants to re-sign Smith. He’s publicly on the record with that statement. Secondly, at age 39, Smith won’t be signing a long-term deal. It certainly seems like both sides want the same thing, and the Oilers can take their time with Smith.

As for the other three? Losing all of them could prove to be a disaster for an Edmonton team looking to win its first playoff series in five years next spring.

Here’s the latest on each of the big three pending free agents.

F Ryan Nugent-Hopkins: Sportsnet’s Elliotte Friedman didn’t have much to say about the Oilers in his ‘31 Thoughts‘ post last week. He did, however, have one tidbit on the ongoing negotiations between the Oilers and Nugent-Hopkins.

17. Edmonton and Ryan Nugent-Hopkins are grinding to find common ground.

What that common ground is, however, remains a mystery. Kurt Leavins of ‘The Cult of Hockey‘ over at the Edmonton Journal reported on June 13th that negotiations between the sides had resumed, and that both sides may have to be willing to give a little to make this work.

Logic would dictate Holland being open to some additional term in exchange for an AAV that the G.M.’s budget can more easily manage.

However, the Oilers will need to be cognizant of Nugent-Hopkins’ declining production at five-on-five. Giving term to a player who has started to show signs of decline is risky business. Still, the Oilers can’t afford to lose a top-six forward without a concrete plan to both replace him and add an additional top-six option. It makes a tough summer nearly impossible.

It appears that while both sides are working towards a contract, the Oilers and Nugent-Hopkins are no closer than they were at the end of the season.

D Adam Larsson: If there were odds on pending UFA’s re-signing, Larsson would be the Vegas favorite. The shutdown defenseman and the club made progress around the trade deadline in April, but then agreed to shelve talks as the playoffs approached. Contract negotiations between the sides are reportedly set to resume in short order.

David Pagnotta of ‘The Fourth Period‘ tweeted the following on Monday.

There hasn’t been much progress yet on a contract extension for Oilers D Adam Larsson. But I’m told Edmonton and Larsson‘s camp will resume negotiations this week.

At last check, sources indicated that a contract length of three or four years with an AAV in the $3,750,000 to $4,000,000 range was most likely. Considering Larsson’s value to the club as both a veteran leader and the only shutdown option on the roster, that contract seems well worth it.

Ethan Bear and Evan Bouchard are both under contract and expected to play key roles on the right side of the defense in 2021-22. Bear is a more complete defenseman, while Bouchard has all kinds of offensive skill, but both are relatively young. Larsson gives the group some size, snarl and defensive ability.

While it’s still possible things don’t work out, Larsson seems to be the most likely re-signing for the club in the near future.

D Tyson Barrie: The fit for Barrie and the Oilers was perfect in 2020-21. Barrie slid in on the league’s top powerplay in the absense of Oscar Klefbom, and led all defensemen league-wide with 48 points (8 g, 40 a) in 56 games. Now a pending free agent, Barrie has been very open about his desire to sign a long-term deal in his second foray into free agency.

Pierre LeBrun of ‘The Athletic‘ reported earlier on Wednesday that the Oilers do have interest in bringing Barrie back, but only if he fits into the team’s cap situation. That may not be realistic.

LeBrun did speculate that while more money is likely to be on the market for him, Barrie would have to consider re-signing in Edmonton if the Oilers offered him a three-year deal with an AAV in the $4,500,000 to $5,000,000 range.

However, it is hard to imagine the club offering that kind of deal if Larsson re-signs. At that point, Larsson, Bear and Bouchard would be under contract. Unless a trade was coming or someone was moving to the left side, Barrie wouldn’t fit anymore.

Barrie’s fit is also questionable if the club is serious about giving Bouchard, their top prospect, a real look three years after selecting him.

At this point, it seems unlikely that Barrie will return to Edmonton. A lot of Oiler fans focused on what Barrie didn’t do well, but he was the team’s best puck moving defenseman last year and was highly entertaining to watch in the offensive zone. That said, with good right side depth and contract demands that don’t fit the team, a second deal seems unlikely for Barrie and the Oilers.

Things could always change if Barrie doesn’t like what he sees on the free agent market.

Larsson, on the other hand, seems like the most likely player to re-sign at this point. He’s a unicorn in the sense that he’s the only shutdown defenseman on the NHL roster and likely the only one capable of handling top-four NHL minutes in the organization. Larsson is also viewed as part of the leadership core and has a desire to remain in Northern Alberta.

Nugent-Hopkins, meanwhile, remains a wild card. It’s probably a decent bet that he’ll rebound after a tough 2020-21. Perhaps a consistent role with Leon Draisaitl and Kailer Yamamoto, pending a left winger added to play with Connor McDavid, reignites his offensive game. He played some outstanding hockey in the second half of 2019-20 on a line with those two.

Nugent-Hopkins is a core piece, plays both special teams and is well liked in the room. Still, Holland will need to be careful here, and it’s tough to get a read either way on this negotiation.