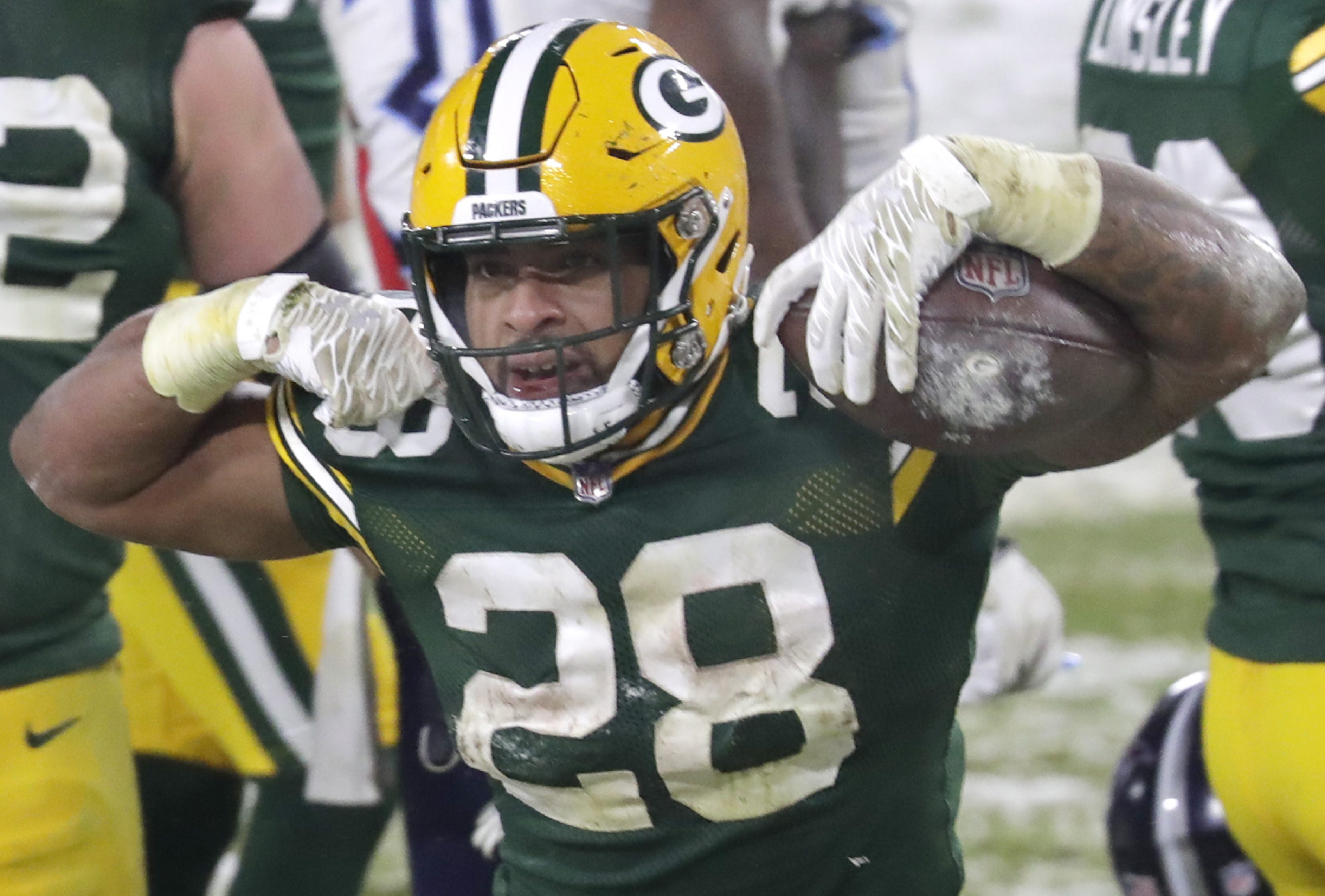 Packers running back A.J. Dillon had his share of ups and downs during his rookie season. He spent most of the year as the Packers third running back behind Aaron Jones and Jamaal Williams. He spent time on the Covid-19 reserve list after contracting the virus. Dillon later returned to the roster and had a breakout game against the Titans in Week 16 when he gained 124 yards on 21 carries and scored two touchdowns in the Packers 40-14 victory.

So, what should the Packers expect from Dillon in year two?

Here are five reasons why we should expect a big step forward from A.J. Dillon as he enters his second NFL campaign:

This will be Dillon’s second season in the Packers offense so he has a better understanding of the playbook and the things each play is trying to accomplish.

While running back is one of the easier positions for rookies to step in and contribute right away, there is still a benefit to having a year of experience under your belt to improve your knowledge of the system.

The bigger jump from Dillon may be less obvious to casual fans. He should do a better job of picking up blitzers in pass protection and in running pass patterns. These are the things that have traditionally kept younger running backs from getting extended playing time in Matt LaFleur’s system and they are things that should improve for the former Boston College star in his second year in the league.

With Jamaal Williams now a Detroit Lion, Dillon will move up to the number two spot on the Packers depth chart behind Jones. That means he should get a lot more snaps in 2021 than he got in his rookie campaign.

Look for “The Sauce” to see the field on roughly half of the Packers offensive snaps this season if he stays as the team’s number two back on the depth chart.

The Packers may go to more sets with both Dillon and Jones on the field at the same time in 2021. They used two RB sets a bit more often late in the season and into the playoffs. It gives opposing defenses more to think about.

If LaFleur goes to more two back alignments, it will increase Dillon’s playing time and likely his workload as a runner, blocker and receiver. That will mean a more productive year as well.

Aaron Jones has played four seasons for the Packers since they drafted him in the fifth round in 2017. He has played all 16 games in only one of those seasons (2019).

Jones is an outstanding back, but at 5’9”, the Packers have often said that they need to limit his workload to make sure he is healthy and still fresh come December and January.

To accomplish this goal, Dillon is likely to see the field for several series each game where he will be the primary back and Jones will be taking a breather much like Jamaal Williams used to do.

Obviously, if Jones is hurt at any time, Dillon would step up and take over as the primary running back in the Packers offense which would also increase his workload.

We still don’t know whether the Packers will have Aaron Rodgers under center come Week 1 in New Orleans or if Rodgers will be back with the Packers at all in 2021.

If the answer is no and Jordan Love takes over as the starting quarterback, the Packers are likely to emphasize the running game even more this season than they have in the past. This would be designed to take some pressure off the inexperienced quarterback and to have him throwing in more reasonable down and distance situations as often as possible.

The offense is also more likely to feature more checkdown passes under Love which could mean increased receptions for Dillon and Jones over the course of the season.

Overall, it would be reasonable to expect Dillon to gain between 400 and 600 yards this season if he stays healthy and for him to catch at least 30 passes.

If Jones misses significant time, those numbers could go up dramatically.

Either way, look for Dillon to be a bigger part of the offense in 2021 and to see his statistics increase accordingly.