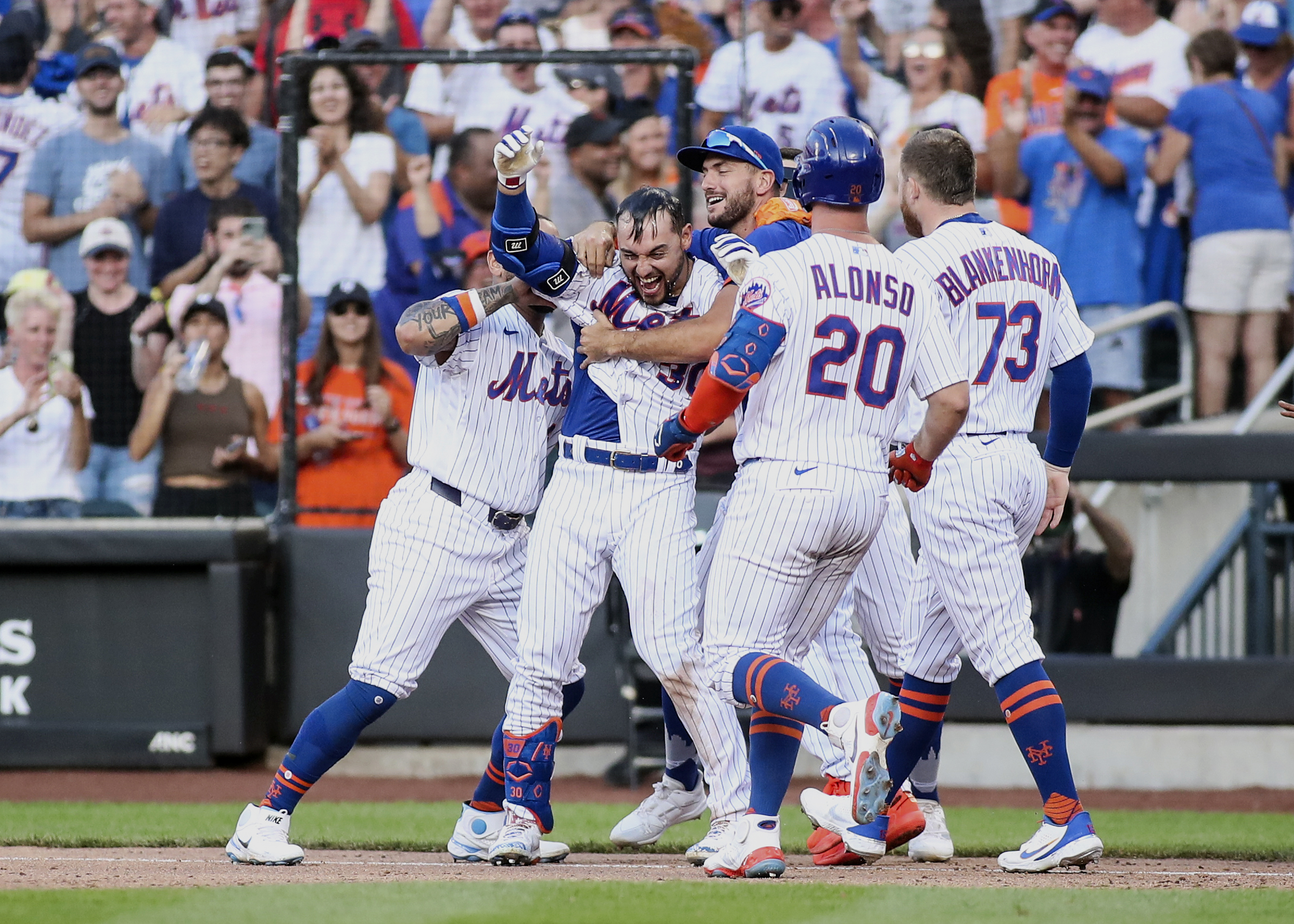 New York-With the season nearly three months old, we’ve learned a lot about teams. Some squads have a knack of finding ways to win while others simply can’t get out of their own way. The New York Mets (40-32) have found themselves in the former, coming from behind on three separate occasions today to top the Philadelphia Phillies (35-39) 4-3, who have put themselves in the latter camp in a way that is killing their season.

Jacob deGrom started the day for the Mets on a streak of allowing one or fewer runs in all 12 of his starts to begin the year. The Phillies generated a run in unusual fashion in the top of the second when Andrew McCutchen singled off deGrom’s rear end and stole second. Nick Maton, who entered the game hitless in his last 28 plate appearances, singled home McCutchen to give the Phillies a 1-0 lead and snapped deGrom’s streak of scoreless innings at 31, just 1.2 innings shy of tying R.A. Dickey’s franchise record.

The Mets got the run back in the bottom of the frame against Zach Eflin, who gave up back-to-back hits to Dominic Smith and James McCann to start the frame. Jose Peraza then ripped a double down the line to tie the game at one, but the Mets couldn’t take the lead by making three straight outs, including a fielder’s choice off the bat of deGrom that resulted in McCann getting thrown out at the plate by Rhys Hoskins.

Jose Peraza drives in Dom to tie the game! pic.twitter.com/G4MVa2vMp3

deGrom settled into a nice groove at that point but ran into some trouble in the sixth when Odubel Herrera doubled to lead off the inning. Hoskins drew a five-pitch walk before deGrom hit Harper on the foot to load the bases with no one out, eventually conceding the go-ahead run on a sacrifice fly from McCutchen. deGrom escaped the jam by getting Luke Williams to ground back to him to end the inning, concluding his worst start of the season, where he allowed two runs on three hits while walking one and striking out five over six innings to raise his ERA from 0.50 to 0.69. There’s a joke in there somewhere but we’ll stay on topic for now.

The Mets couldn’t touch Eflin for six innings as he allowed only the one run on five hits, but Joe Girardi gave them hope by letting the bullpen door swing open in the seventh despite the fact that Eflin had thrown only 82 pitches and batted for himself in the top of the seventh in a sacrifice situation. Lefty Ranger Suarez came in and got the first man out before pinch hitter Kevin Pillar tied the game with this bomb to right for the first pinch-hit home run of his career.

The score remained tied until the ninth when Luis Rojas went to Edwin Diaz in a tie game. Diaz didn’t have his command early on, hitting McCutchen to lead off the inning before walking Williams. A pair of stolen bases put the runners on second and third before Maton delivered a sacrifice fly to left to put the Phillies back in front 3-2. The Mets caught a break when Williams tried to force the issue by stealing third only to slide directly into the foot of Luis Guillorme, allowing him to apply the tag to remove the extra runner. That benefitted Diaz (W, 2-2), who was then able to strike out Ronald Torreyes to end the inning.

Girardi went back to Hector Neris (L, 1-5) to try and get his second straight save in this series but things backfired quickly as Hoskins couldn’t handle a hard-hit grounder from Travis Blankenhorn, allowing the tying run to reach base. Neris then walked pinch hitter Billy McKinney before Pillar delivered an infield single to load the bases for Luis Guillorme, who worked a walk to tie the game on a borderline 3-2 pitch.

That call left Neris staring in at home plate umpire Doug Eddings and he was simply in disbelief at the call. At that point, the ending felt inevitable, with Michael Conforto’s sacrifice fly bringing in the winning run.

As amazing a win as this was for the Mets it was simply more of the same for the Phillies, who completely gift-wrapped this game for them behind bad defense and poor bullpen work. Neris has now blown six saves this season and the Phillies as a team have blown 20 saves this year, including six in the past four games, which is simply mind-bogglingly bad. Give some credit to SNY for this closeup on Neris after the bases-loaded walk to Guillorme, which just about sums up the Phillies’ year in a nutshell. 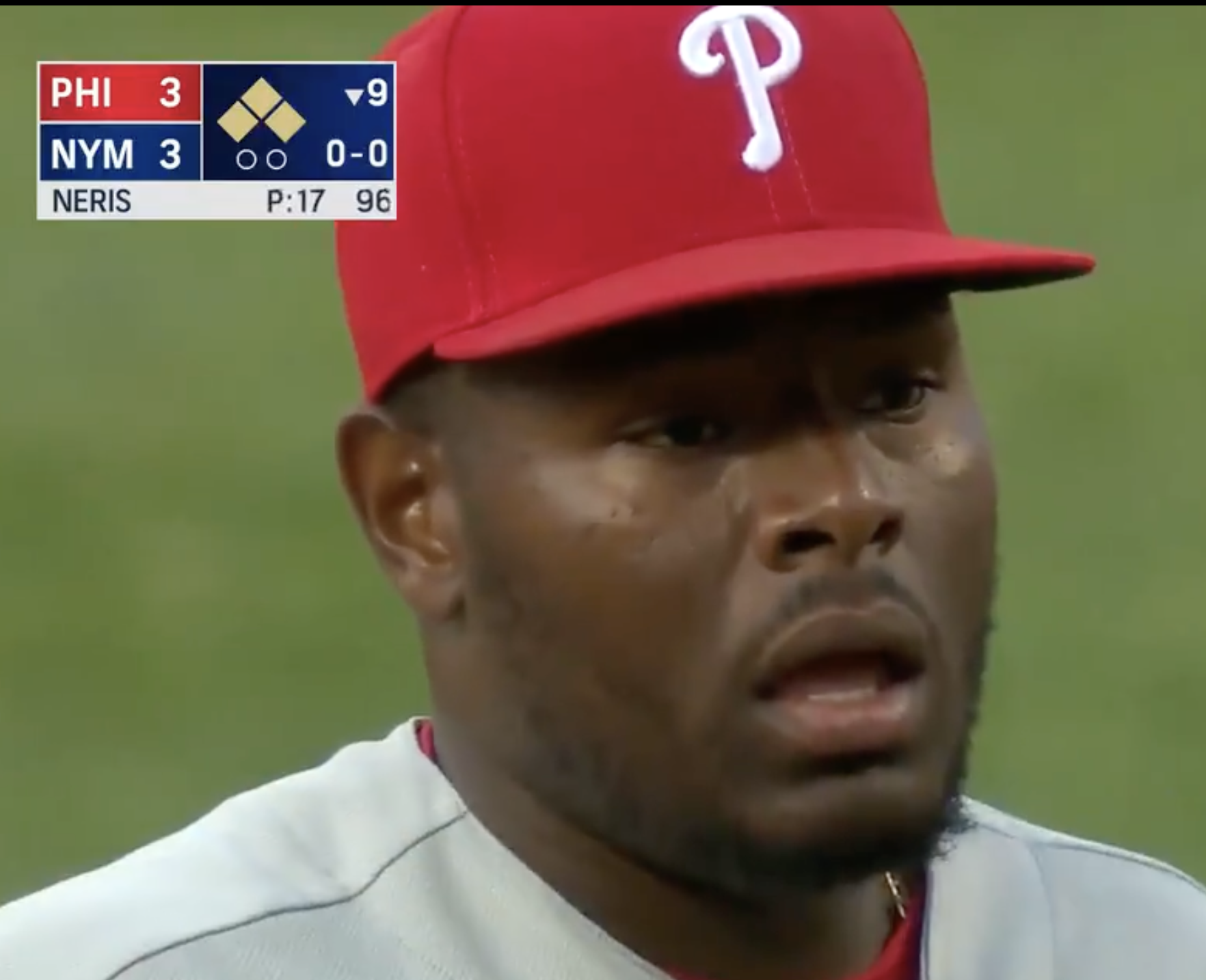 The Mets will look to wrap up their homestand with a series victory against the Phillies tomorrow afternoon. Right-hander Marcus Stroman (6-5, 2.32 ERA) has been cleared to start for the Mets after lasting just over one inning in his previous outing due to a hip issue. Former Met Zack Wheeler (5-4, 2.36 ERA) will take the mound for the Phillies to try and salvage a series split. First pitch for the Sunday matinee is scheduled for 1:10 p.m.