Defense Matters ... For Better Or Worse 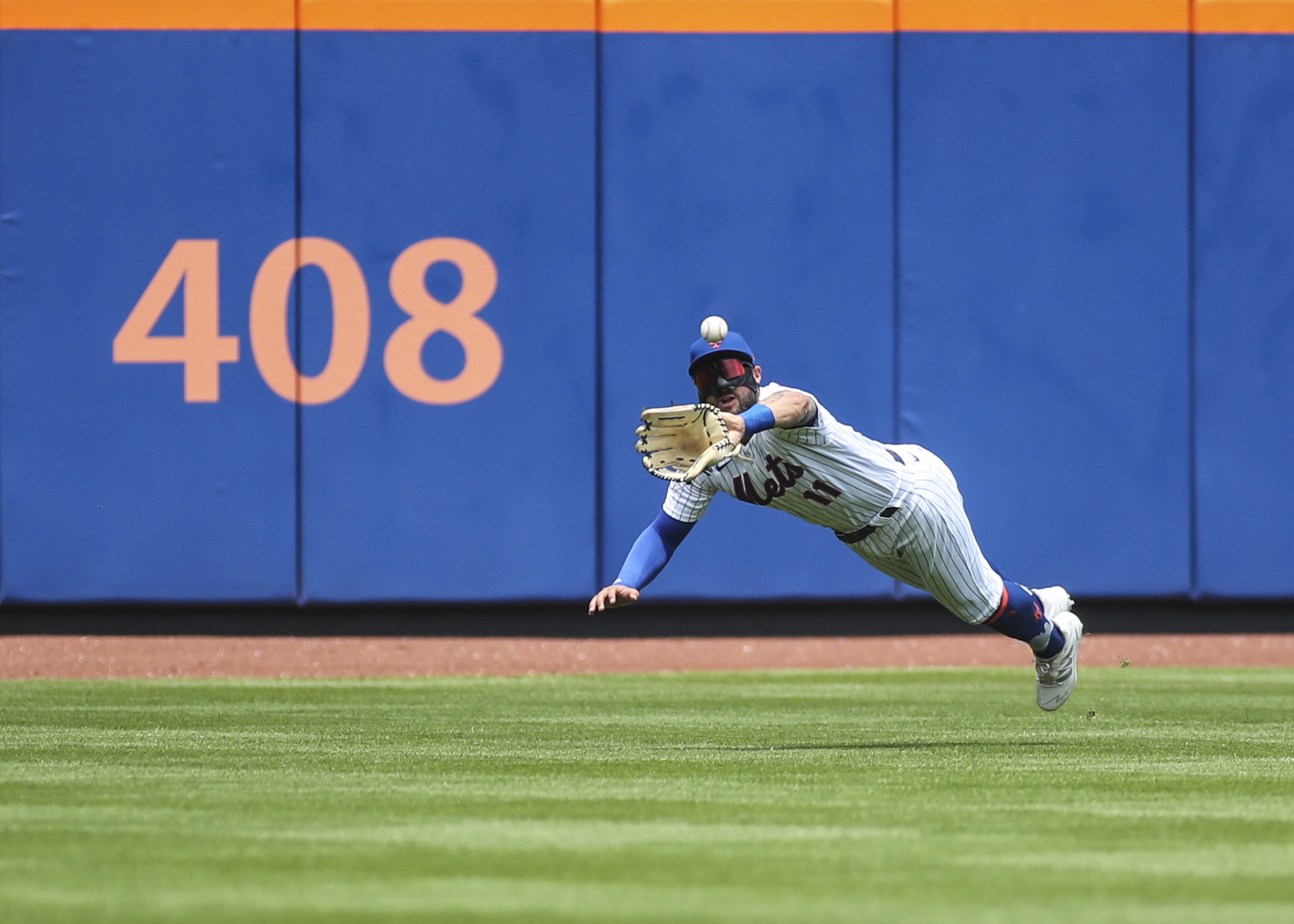 Defense Matters ... For Better Or Worse

So we get to the second inning in Sunday’s game, and I’m already thinking of a narrative for today’s post, which is to say that defense matters. What we’ve learned about the previous three games in this series is that the team that has played better defense has won. The Phillies defense has been more of the measuring stick than the Mets defense. When the Phillies have played good defense, such as when Andrew McCutchen robbled Albert Almora Jr. during the second game on Friday, they have won. When they have played terrible defense, which has been the other two games, they have lost. In this game of increasing “three true outcomes”, defense might not matter as much, but it has been the new market inefficiency. And if you can’t field, boy will it show more in this modern game.

Marcus Stroman labored through a long first inning on a hot day, but was saved by diving catches by Michael Conforto and Kevin Pillar. Then in the bottom of the first, the Phillies let a Francisco Lindor fly ball drop fair and hop into the stands for a ground rule double, and then Pete Alonso grounded a single to right field. That’s when the narrative turned.

Lindor was not sent to the plate by Gary DiSarcina (which we will get to later), and was stranded at third base. Then, as we hoped for a quicker inning for Stroman in the second than in the first, instead we opened a portal to hell. With runners on first and second, Zack Wheeler dropped down a sacrifice bunt and Stroman had no choice but to hurl it to first, where Jeff McNeil was covering. But McNeil, in a play that second basemen covering first will make 999 times out of 1,000 (no, this is not a scientific number, leave me alone.) But McNeil just flat out dropped it and the bases were loaded with one out. 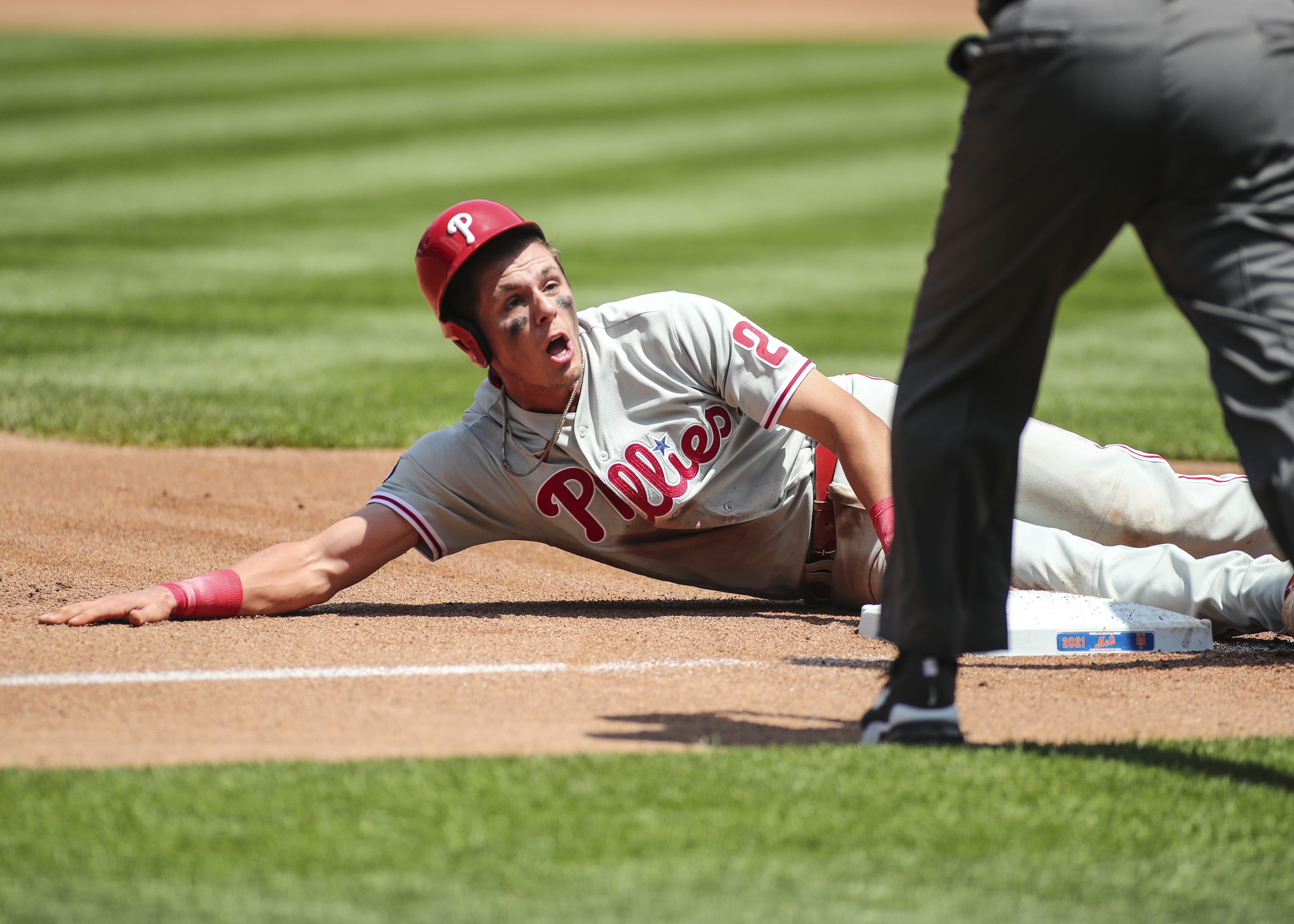 Jun 27, 2021; New York City, New York, USA; Philadelphia Phillies second baseman Nick Maton (29) reacts after being called out on a run down play against the New York Mets in the second inning before the call was overturned after a review at Citi Field. Mandatory Credit: Wendell Cruz-USA TODAY Sports

Then, after Nick Maton was caught off third on a dumb break for the plate but was saved when replay showed that he swam around Luis Guillorme’s tag, Odubel Herrera brought him home with a sac fly. One unearned run scored in that whole sequence, but the real consequence was extending Stroman’s inning on a really humid day. I mean, I’m not a world class athlete but I went out to get my Sunday bagel (bacon, egg and cheese on a plain bagel … shout out to Forest Hills Bagel on Queens Blvd.), and I felt like I was swimming in sweat. Stroman is a world class athlete, but he was also working a lot harded than me, and he worked harder than he should have after the McNeil error.

Stroman, predictably, melted down in the third. He gave up a single and a walk and a sacrifice. He got Alec Bohm to ground out to bring home the second run, and he was about ready to get out of it. But a flare double to Maton made it 3-0, and then a rare error by Luis Guillorme on a topper that he had to chargebrought home an unearned run to make it 4-0. It pretty much sealed Stroman’s fate as he only lasted three innings, giving up the two earned runs and the two unearned runs. But to be honest, he labored all day even when things were going good. He wasn’t long for a Sunday outing anyway, but the McNeil play was a huge factor in Stroman not being able to go further.

The good news is that Corey Oswalt saved the rest of the pen with four shutout innings. The bad news is that Zack Wheeler, who had to pitch in the same heat that Sroman did, went seven and shut down the Mets while giving up only four hits and two walks, and striking out eight in the process. More bad news: The obligatory daily presentation of gifts from the Phillies bullpen to the town of Flushing (what great guests those guys are) weren’t enough to draw them even on the weekend, as Pete Alonso’s single in the eighth and Kevin Pillar’s blast in the ninth could only get them to 4-2 before they finally succumbed.

The Mets were close enough in every game over the past week to really do some damage. But we’re just going to have to settle for treading water, which is better than drowning. The next four against Washington (1) and Atlanta (3) still presents an opportunity to stay separated and perhaps become more separated. Friendly advice for tomorrow: Walk Kyle Schwarber four times.

First, I want to go back to the play where Lindor was held up at third after the Alonso single to right in the first, basically because my buddy Jake demanded I do so (follow him at: @thereitisjake). So let me show you this very low quality video of the play, and the replays, from SNY:

Okay, so … apologies for “video off the television”. It drives me nuts too.

Aside from that, would you have sent Lindor? And considering it was a fantastic throw by Kid Rock Jankowski, would it have changed the outcome of the game? Would the wings of Gary DiSarcina’s butterfly sent this game on a different course? Theoretically, because there’s no way DiSarcina could have known that the throw would have been that good, he probably should have sent him. But the jump wasn’t that great, so maybe that’s what he’s thinking. This one’s on you to decide, but things went south from this point on.

MLB has made a mockery of this sticky stuff nonsense from here to high heaven. But does Hector Santiago not watch television? Did he not see Max Scherzer stare down Joe Girardi? Did he not see Sergio Romo drop his pants on the field for everybody to see?

Oh wait, that game was on YouTube. Nobody saw it. Okay Hector, you’re forgiven.