Hat-tip to @SportsThor for the suggestion.

On Tuesday, the Edmonton Oilers announced they had re-signed Ryan Nugent-Hopkins to an 8-year, $41 million contract extension. This year, RNH had an underwhelming offensive season, especially considering he spent most of it on a line with Connor McDavid, who put up one of the greatest offensive seasons in the history of the league. Still, most reasonable fans and pundits have acknowledged that letting RNH walk would have been, at the very least, a step backward for the team that they would have needed to match with at least an equally large step forward somewhere else. But now that the business is officially done, there’s a natural question we can ask: should we expect RNH’s down year to turn into a trend, or should we expect a bounce-back? This is a difficult question to answer simply, because making a prediction about a player’s future performance has many components. I will try to address one such component here: How much of RNH’s down year can be attributed to teammate Tyson Barrie, who played his first season with the Oilers this year?

That seems like an unusual question to ask. Barrie led NHL defencemen in points this year, and most NHL forwards would be licking their chops at the opportunity to play with the NHL’s most productive defenceman in their contract year. From this point of view, you could conclude that RNH wears the responsibility for his down year; he had every opportunity to succeed on offence. Spending most of the season on a five-man unit with both the NHL’s highest-scoring forward and defenceman should have been like winning the lottery, but RNH put up mediocre points-per-game numbers relative to past seasons: 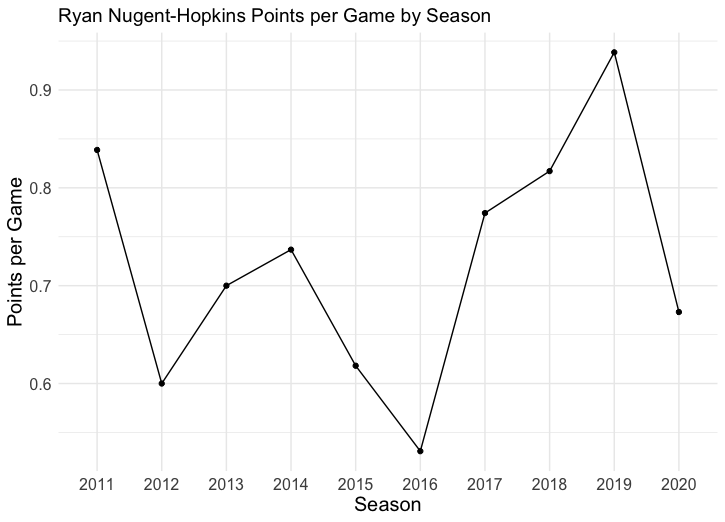 At the very least, this season ended a run of three straight seasons where RNH racked up more points per game than the previous one. It seemed, until this year, like The Nuge was going to reach another level. It is especially troubling that he did not, given he played with the league’s highest-scoring forward and defenceman. But there’s another possibility: Maybe the reason Barrie was the NHL’s highest-scoring defenceman is related to the reason RNH had a down season in terms of point production. Specifically, maybe some of the assists RNH had been cashing in on in recent years (and sans-Barrie, would have cashed in on this year) were instead scooped up by Barrie this year. But that raises another question: how would we know?

The way I think about it, there are two ways this could be true (and of course there could be more that I haven’t thought of). In both cases, what I’m concerned with is the proportion of goals that get scored when RNH is on the ice on which he records an assist. That is, if Barrie is stealing RNH’s assists, we’d expect RNH to record fewer assists specifically for goals that are scored when he is on the ice. For the purpose of this post, I’ll call it Assists per Goal. The logic behind this is, if we subtract Barrie from the equation, these are the goals RNH would have been more likely to record assists on, thus mitigating his down year.

The first mechanism I see as a possibility is that RNH gets the puck to Barrie, and when the puck goes in, Barrie eventually records the secondary assist. That is, maybe a large portion of RNH’s assists became “third assists” and no longer count on the scoresheet. This seemed plausible because of the large number of secondary assists Barrie recorded this season (27, which led all NHL defencemen). Let’s look at RNH’s Secondary Assists per Goal for each of his career seasons. If Barrie was specifically stealing secondary assists this year, we’d expect RNH to show a substantial drop in Secondary Assists per Goal like we saw in points per game. 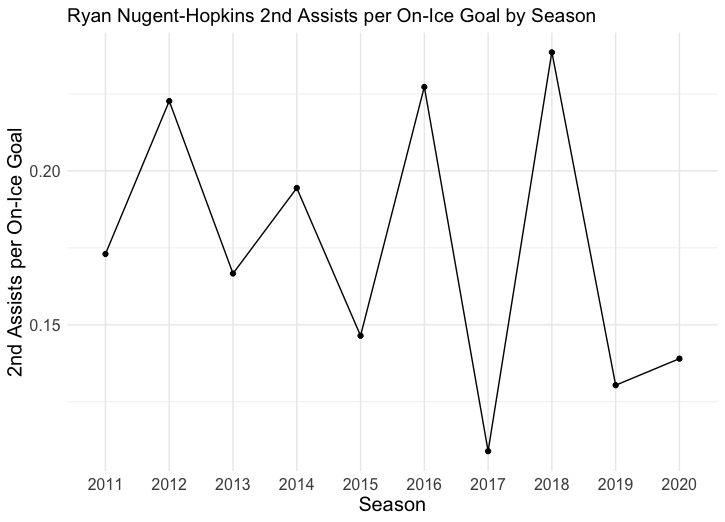 This is not what we see. RNH actually recorded a greater proportion of secondary assists per on-ice goal this year than last year. He also recorded fewer in 2017. It is also true that this metric seems to be extremely ‘noisy,’ or highly variable from year to year. In sum, I think it is very difficult to draw any sort of meaningful conclusion from this, but I think we can assume that it is not the case that Barrie caused RNH’s secondary assists to become third assists.

The second mechanism I see as a possibility is that Barrie gets the puck immediately to one of the Oilers’ most skilled players (Connor McDavid or Leon Draisaitl), who create a goal before RNH has a chance to get involved in the play. This would appear as a substantial drop in Assists per Goal (both primary and secondary) from last season, because RNH is simply not touching the puck as often on scoring plays. Here’s his Assists per Goal for each of the seasons he has played in his career: 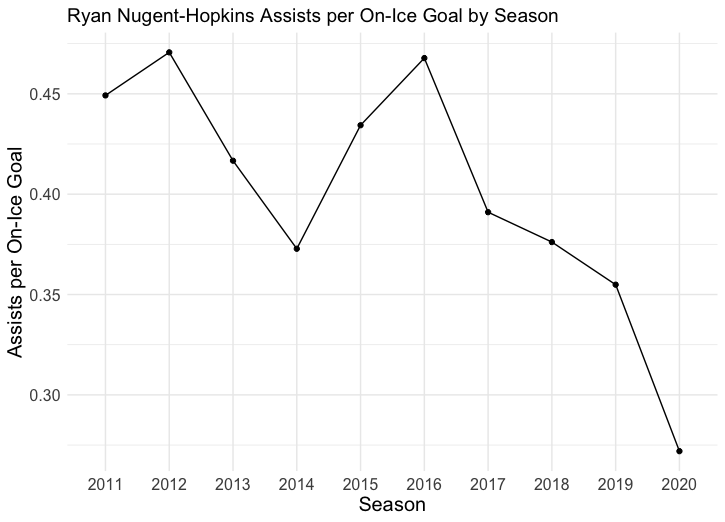 There’s certainly something there. RNH recorded by far his fewest career Assists per Goal this season. Remember that he played with Tyson Barrie only this season and none of his previous seasons. So, we can’t rule out the idea that Barrie has stolen some of RNH’s assists. But, it should also be the case, if Barrie is recording some of the assists that were RNH’s in past seasons, we might expect to see a large increase in Assists per Goal for Barrie this season. 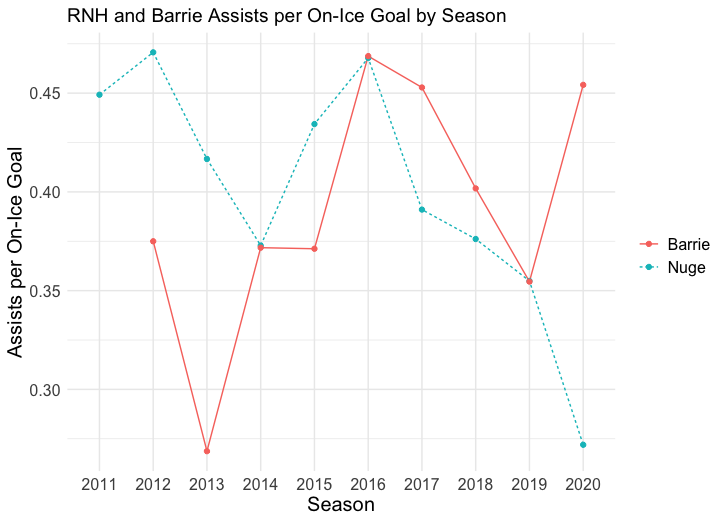 This is extremely suspicious. From this graph alone, it certainly appears to be the case that Barrie stole some of RNH’s assists. Barrie’s Assists per Goal jump from last year to this year is almost exactly equivalent to RNH’s drop in Assists per Goal. I think the conclusion from this is that, had the Oilers not signed Tyson Barrie, RNH would very likely have had a much more normal season, at least in terms of the proportion of goals scored while he was on the ice on which he recorded an assist. Following from that, you could certainly argue that RNH might see an increase in this metric next season (if Barrie is not re-signed by the Oilers), and beyond that, a return to form in terms of points per game. This is especially true if he logs any serious ice time with Connor McDavid and/or Leon Draisaitl, who have been 1-2 in league scoring for two seasons in a row. For this reason, it might even be reasonable to expect RNH to outperform his Assists per Game (and maybe his Points per Game) from two years ago.

Some Reasons to Be Cautious

I want to preach caution for two reasons. To make a strong conclusion on this topic, you’d want to be certain of (at least) two things. One, that this drop is driven primarily by goals scored when Barrie is on the ice with RNH, and not by goals scored without Barrie on the ice. If we want to pinpoint Barrie specifically as RNH’s problem, we’d need to be certain that RNH didn’t also record very few Assists per Goal without Barrie on the ice. If that were true, maybe RNH just had a down season and is at fault for it. I have a scraper I’ve used for NHL play-by-play data, but it seems to be missing too large a number of events (goals with RNH on the ice) for my comfort, and so I can’t make an evaluation with any degree of confidence. If anyone has a working one, or knows where you can get such data (which players are on the ice for each goal scored and who recorded the assists), I encourage them to take a crack at this or we can collaborate on it.

Two, we’d need to be certain that the drop in assists/goal this season is more than we would expect by random chance. It’s possible that RNH’s down year is just a blip (and this is even more likely because it was a shortened season). Luckily, this is the type of analysis I’m actually formally trained to do. I tried this several ways and I won’t include all the details to avoid boring you (if you’re interested, you can find those details in my code housed on my GitHub here), but I conducted a Bayesian t-test with a prior distribution scaled to the size of the difference in Assists per Goal from 2019 to 2020 for all NHL skaters. In essence, what this test tells us is how unlike the average 2019-2020 difference in this metric RNH’s difference is. And the results of that test are almost perfectly inconclusive. That is, there’s very little evidence that RNH’s drop in Assists per Goal this year is any different than the drop experienced by random chance across all the league’s players.

In summary, it certainly looks like Tyson Barrie stole a substantial number of assists from Ryan Nugent-Hopkins this year. It looks like this because RNH recorded by far his lowest career Assists per Goal, and the drop in this metric from last year to this year is almost perfectly matched by an increase in the same metric for Tyson Barrie. But, there are reasons to be cautious about that conclusion. As for what to expect from RNH next year, let’s work off the assumption that the Oilers won’t be re-signing Barrie. I’d predict, based on what I’ve detailed here, that RNH will likely be more involved in the goals scored when he’s on the ice next season. And, given he’s likely to record a lot of ice time with at least one of Connor McDavid or Leon Draisaitl, I’d expect his points-per-game to increase next year as well. In other words, I’m betting on Ryan Nugent-Hopkins to out-produce his contract next year.

You can find me on Twitter @OilersRational. I’ve made my code and the data I used (adapted from Natural Stat Trick and MoneyPuck) available here if you want to try running this analysis for yourself or tweaking parts of it. I’m also available for help if you want to get into analyzing data but don’t know where to start.