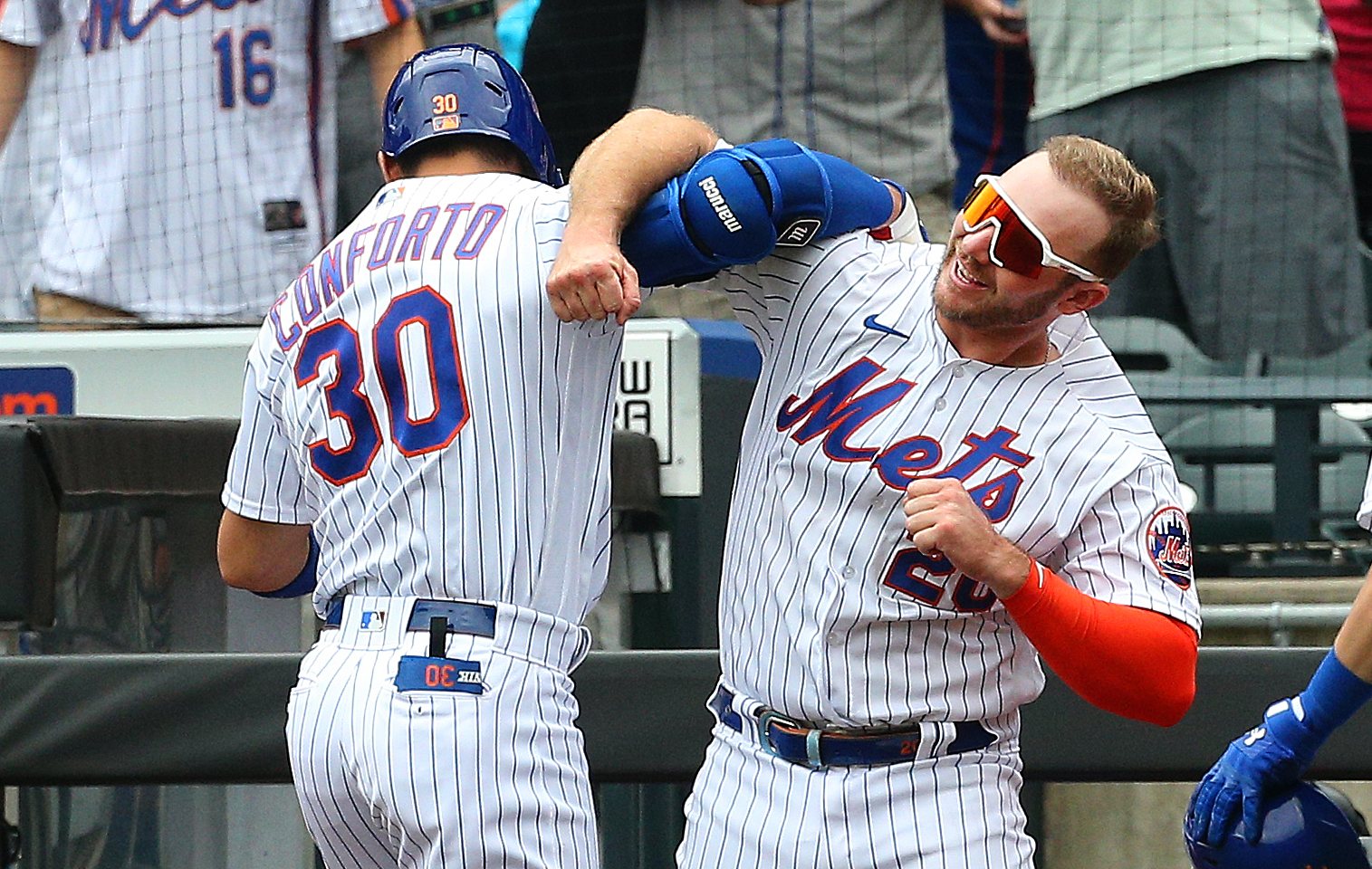 The end of the first half wasn’t fun for the New York Mets, who blew a 5-0 lead to the Pittsburgh Pirates in their worst loss of the year. The positive sign for the Mets is that the loss is merely a minor annoyance in a year that has gone far better than any realistic fan could have hoped for given the seemingly endless string of injuries the franchise endured. Despite losing multiple key cogs for weeks at a time, the Mets finished the first half with a 47-40 record and in sole possession of first place in the National League East by 3.5 games.

The story of the half for the Mets has been tremendous pitching. Jacob deGrom was unworldly, pitching to a 1.08 ERA (which leads the league by a wide margin) while also leading the team in wins (seven) and strikeouts (146). The big surprise on the pitching side has been Taijuan Walker, who earned a trip to the All-Star Game by going 7-3 with a 2.50 ERA to stabilize the rotation behind deGrom. Marcus Stroman has also pitched well, going 6-7 with a 2.75 ERA to give the Mets three quality arms at the top of their rotation, an important development given David Peterson’s struggles, the loss of Joey Lucchesi to Tommy John surgery, and slower returns from injury for Carlos Carrasco and Noah Syndergaard.

The other big key to the Mets’ success has been a dominant bullpen, which has been pretty lockdown on most nights. Edwin Diaz has been strong (Sunday notwithstanding), recording 19 saves in 21 opportunities, while Aaron Loup has been outstanding all season long. There have been ups and downs for Trevor May and Miguel Castro, each of whom has stepped up in key moments. Seth Lugo has also looked sharp after missing the first two months of the year due to injury, giving the Mets some serious depth in the bullpen for the first time in a while.

The offense has been lagging for the Mets, who have scored the second-fewest runs in the National League to date, although offensive injuries have played a big role. Brandon Nimmo, Michael Conforto, Jeff McNeil and J.D. Davis all missed significant time while Francisco Lindor got off to a rough start, forcing role players to step up. The Mets did get outstanding contributions from bench players like Kevin Pillar, Jonathan Villar, Billy McKinney and Jose Peraza along the way to sneak out victories while the injured players healed up.

Another underreported development for the Mets was a vastly improved defense which has helped them win a lot of low-scoring games. A heavy emphasis on shifting has allowed the Mets to position their defenders more appropriately, allowing them to make more plays that they couldn’t in a standard alignment.

The other thing that has benefitted the Mets to date is a softer than expected National League East. The Atlanta Braves have been a mess, losing multiple key stars to injury while they just can’t get all facets of their team clicking at the same time. The Philadelphia Phillies are currently in second place at .500 but have a bullpen that has somehow gotten worse from year to year while the Washington Nationals are a top-heavy team that lost one of its big run producers, Kyle Schwarber, to a significant hamstring injury after a scorching hot June.

Another positive sign for the Mets is that some of their injured hitters have been returning and starting to warm up. There are still areas of the team that need improvement, however, including more pitching depth and an impact bat for third base. The Mets’ lineup has had its issues against left-handed pitching so a guy like Kris Bryant or Josh Donaldson could be a king-maker for this group. Adding a starter to provide good innings at the back of the rotation can protect the bullpen while finding another bullpen arm is never a bad idea.

If you told most rational Mets fans at the beginning of the season that they would have this many injury issues and still be in first place by 3.5 games at the end of the first half they would have signed for it immediately. The Mets have gotten off to a good start over their first 87 games but they can’t be complacent with what they have right now. The mission over the next 75 games, and potentially beyond, should be to fill the key holes the Mets have in order to seal up the division and get ready for a run at the pennant in October.