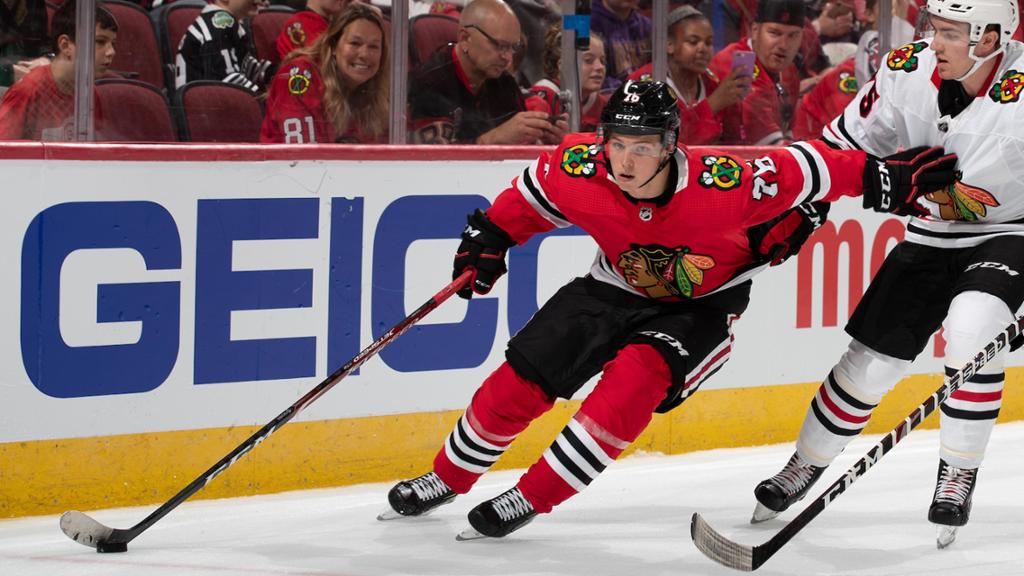 Yesterday’s trade is going to be known as ‘The Duncan Keith trade‘ when everyone looks back on it years from now. The deal will either help move the Oilers from consistent playoff team to Stanley Cup contender, with Keith’s wisdom rubbing off on Edmonton’s young core while he fills a second pairing role, or be a complete disaster.

There was, however, another piece coming to Edmonton in the deal, as young forward Tim Soderlund joins the Oilers.

Drafted 112th overall in the fourth round of the 2017 NHL Draft, Soderlund just completed his second season of professional hockey in North America. That said, the 5’9″, 163 pound Swede has had trouble producing at the AHL level.

In 2019-20, Soderlund appeared in 29 games for the Rockford IceHogs of the AHL, scoring just three points (1 g, 2 a) with a -6 rating. Soderlund struggled to the point where the Blackhawks moved him to the ECHL, where he played in seven games for the Indy Fuel. He was an impact player in the ECHL, scoring six points (2 g, 4 a) in those seven games.

In 2020-21, Soderlund started the season back home in Sweden. He appeared in 23 Allsvenskan games for Almtuna IS. Soderlund actually showed promise during this stint, scoring 16 points (10 g, 6 a) while going +1.

In fact, after a tough first season in North America, Soderlund believed that his return trip home helped him regain his confidence.

“I feel like now I’m used to it again,” Soderlund told The Athletic’s Scott Powers back in December. “I feel like I got back my confidence with the puck and taking the shots, instead of just going to the corners. That’s one of the things I’ve been improving this year. If we lose the puck, I can forecheck and take the puck back really fast and start creating offense again.”

He was unable, however, to build on that during his return to North America when the NHL and AHL seasons began. Back in Rockford, Soderlund played in 23 AHL games and failed to score a goal. He finished the campaign with just five assists and a -14 rating.

Clearly, as evidenced by this trade, he fell out of favor with the Blackhawks. Struggling to adapt to the IceHogs system, and the North American game, could have played a big role in all of this.

“I feel like on defense I need to play the system,” Soderlund told Powers in that same article. “That’s the thing I’m trying to learn really well so the players can trust me when I’m on the ice. On the offensive side, I need to play with a lot of give and go with my teammates. I think last year I took the puck too much myself and skated. I think I’m improved a lot in being able to play with my teammates and create chances together.”

The good news for Soderlund is that he should get a look under Jay Woodcroft in Bakersfield this winter. Woodcroft has done great work with the Condors, and helped get a similar prospect in Ostap Safin back on track in 2020-21.

Even better for Soderlund, the Oilers will only have a handful of prospect forwards in Bakersfield, as Ryan McLeod and Tyler Benson are likely to move up to Edmonton. Pending RFA Cooper Marody, who led the AHL in goals in 2020-21, is unlikely to be re-signed.

That leaves Kirill Maksimov, Raphael Lavoie, Dylan Holloway and the aforementioned Safin as the only prospect forwards of note on the farm.

Here’s a look at what EliteProspects had to say about Soderlund in the leadup to the 2017 NHL Draft.

Very speedy skater with excellent work ethic. Söderlund is rather shifty and plays with plenty of intensity. Has a decent scoring touch, but can also be used as a role player with his speed and forechecking skills. A great character and team player.

In addition, Hockeyprospect.com and Futureconsiderations.ca had the following to add in 2017 and 2016, respectively.

He doesn’t stop moving his feet in the offensive zone, which makes him tough to defend against, as he’s like a little sparkplug out there. – Hockeyprospect.com

He uses his puck skills to deke out opponents, as well as to protect the puck along the wall. He doesn’t shy away from working the boards. – Futureconsiderations.ca

The reality is, Soderlund is a long-shot prospect who probably never plays an NHL game for the Oilers. His AHL numbers indicate that he won’t have the offensive chops to produce in the NHL, even in a depth role.

Soderlund has speed and has some two-way ability, but until he can put up points there isn’t much of a discussion here. The Oilers simply took a flier on a prospect who just wasn’t working out in Chicago. There was potential there, however, and the club is hoping that Woodcroft can untangle it this winter in Bakersfield.

Consider Soderlund a lottery ticket. There are some good qualities to the player, but he’ll need to kickstart the offensive part of his game if he hopes to get back on the radar.