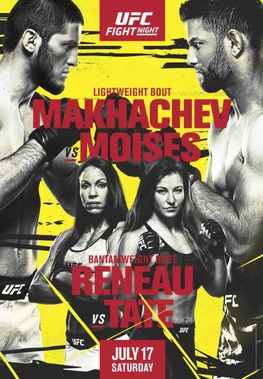 Nobody is going to accuse Nascimento of being a top-notch striker. He has enough skills in the standup department to get things to where he wants them, but where he wants it is for sure on the ground. When things do hit the mat, Nascimento has a knack for getting right at the submissions. He wastes little time in going for them, as was apparent in his Contender Series win and the win in his UFC debut, both of which he finished with early subs. This aggression on the ground is not typical of a heavyweight and, as a result, it plays up being that it is so rare.

After a great fight on Contender Series and a phenomenal UFC debut, Nascimento’s stock was high. Both those submissions likely turned some heads in the heavyweight division and that earned him a step up in competition. That step up? Chris Daukaus. In typical Chris Daukaus fashion, he went out there and worked Nascimento on the feet to a sub-one-minute stoppage. Although this dropped the stock of the Brazilian, the fact that Daukaus is now a top 10 heavyweight makes that loss look not so bad.

Alan Baudot much prefers fights on the feet. He pushes forward at any sign of landing and starts to get reckless. You can see this in just about any of his losses. In a 2017 loss to now-middleweight Dalcha Lungiambula, Baudot got wild with his hands down low and got slept in violent fashion. While I’m not sure that’ll happen to him here, I do think it sets up possible reactionary takedown attempts for Nascimento. It should only take one time of going to the mat to end the fight for the Brazilian.