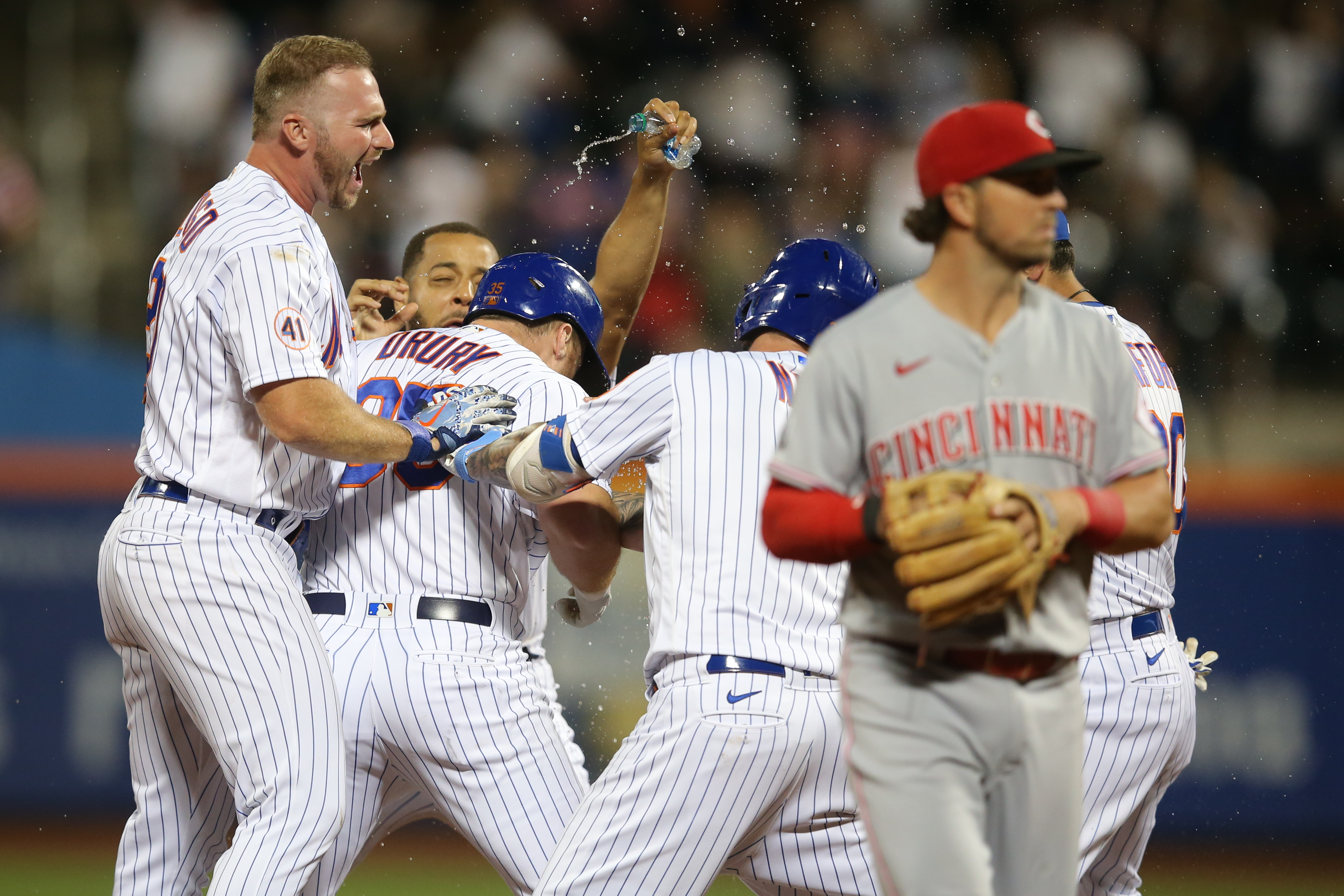 Javy Báez’s two run home run in the 6th inning in his first game as a Met had cut the game to 4-3, and Citi Field was electric. But if the game had ended with that being the final score, there would have been a hint of depression with that home run. Jonathan Villar had gotten himself picked off (for the 4th time this season to go along with two caught stealings caused by pickoffs) right before the dinger, meaning that if the wings of that butterfly weren’t flapping too hard, then the Baez home run would have made it 4-4. It hung over the Mets’ heads like a cloud until the 9th inning.

But before that, there was one event that changed the whole course of recorded history, let along the game for the Mets and the Reds. You see, Joey Votto was one home run away from tying a major league record held by Dale Long, Don Mattingly, and Ken Griffey Jr. for the most consecutive games with a home run at 7. In the 8th inning, with a runner on first, Votto hit a deep drive to right field off Seth Lugo and it was looking like Votto was joining that list. But the ball hit the orange strip on the top of the right field wall and it was nothing more than a long single that put runners on first and third. If Votto eats an extra Kind bar before that at-bat, it’s a home run, a 6-3 game, and it’s over for the Mets.

Instead, Lugo got the opportunity to strike out pinch hitter Tyler Naquin and third baseman Eugenio Suarez to set up the mistake that wound up negating the Villar pick off. Votto somehow got himself picked off first base by Aaron Loup, and the Mets wound up tagging out Kyle Farmer between third and home to end the inning and the threat. Six more inches, and none of this happens.

So the Mets have life in the bottom of the ninth. Jeff McNeil was walked by Heath Hembree to set up the obvious ending, which was Báez hitting a walk off to send everybody home in a frenzy. The 2-0 pitch was wild, sending Guillorme to second base and putting the count at 3-0. Then I think Baez got a little overanxious. With first base open, I was thinking aloud that Baez wasn’t getting anything to hit. Sure enough, Hembree just kept throwing sliders on the outer half, which Báez swung at to strike out. The more egregious at-bat came next as James McCann, for some reason, swung at the first pitch from a guy who could not find the plate. He wound up swinging at a pitch that probably would have hit him, and then the rest of the at-bat was Hembree throwing nothing in the zone and McCann swinging at practically everything, helping Hembree to the second out as if Hembree was being controlled by a video gamer on rookie level. 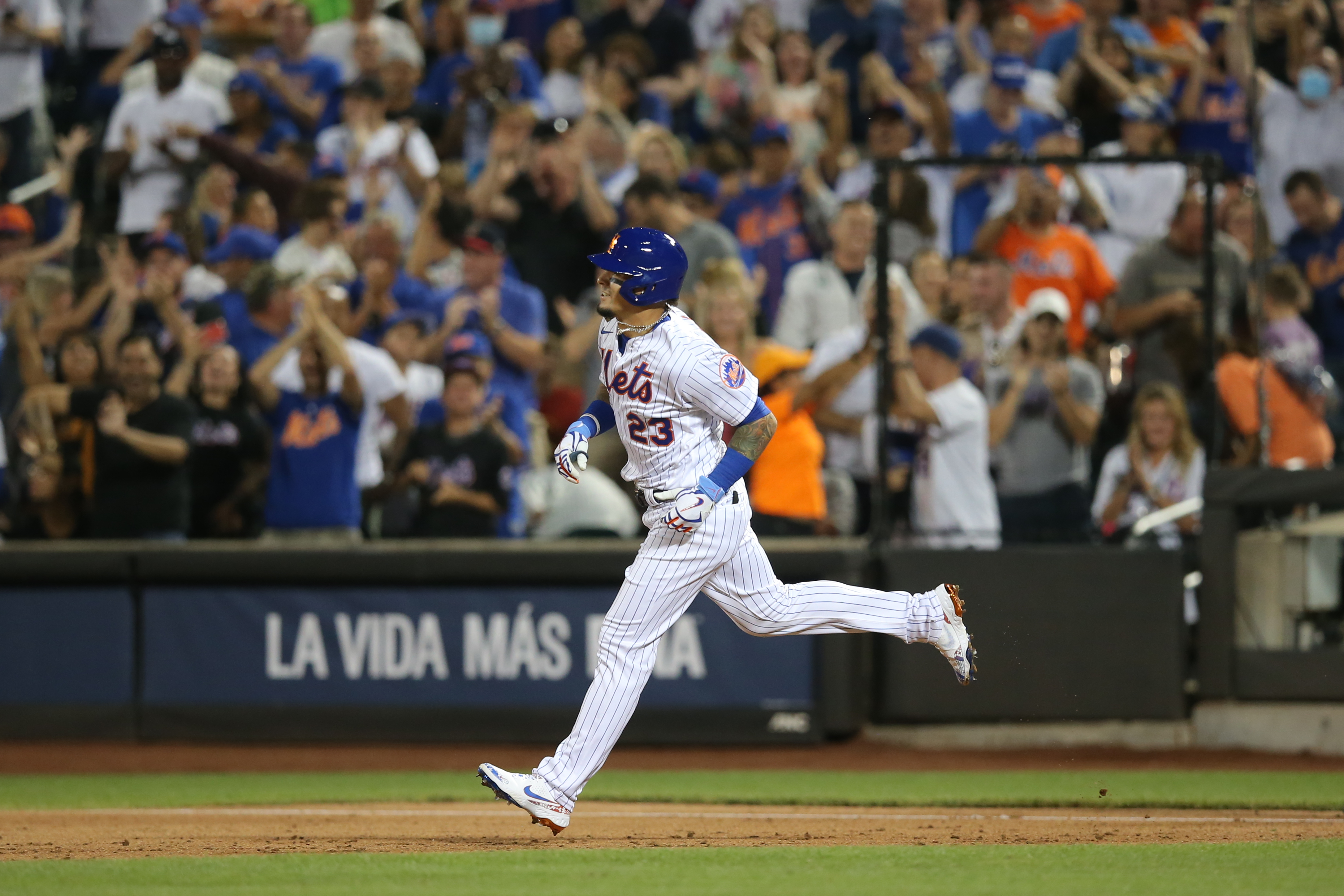 Luckily, David Bell didn’t read the handbook on “How To Provide Good Karma To The New York Mets”, which was basically a pamphlet that led off with: “Put Sean Doolittle in the game.” Surely, Bell couldn’t have read the part of the pamphlet that said that Doolittle had an 11.05 ERA in 7.1 innings at Citi Field. The pitch that Dom Smith hit for a game tying single wasn’t awful. It was a curve ball that was out of the zone, Dom just went and got it. Or perhaps the young ghosts at Citi Field finally learned how to use their powers for good and not evil, and use them exclusively on Doolittle until they’re old enough to harness their true power (or at least old enough to drink, which is what they’ll do the next time the Mets put a team on the field that isn’t good enough to keep games this close late.)

Then came the 10th and Edwin Diaz. With Inky on second, Diaz threw a pitch that Tomas Nido should have caught, but instead, Inky went to third and then Jesse Winker walked to put runners on first and third with nobody out. It was then that Diaz put on an absolute clinic. He went fastball, fastball, slider to turn Farmer into dust. He then went 99 to Votto, and then threw a slider for a ball which Votto barely checked his swing on. It was then that Votto showed that he was a little more anxious than he’s known for. Diaz, perhaps sensing this, threw him another slider and then went up the ladder with heat to make Votto look like a .210 hitting shortstop from the 1940’s. Tyler Naquin gave Diaz a tough at-bat but in the end, Diaz got him to line directly to Kevin Pillar in center to end the threat, and swing the advantage firmly in the Mets corner.

Nobody is wired for it anymore. Guys that hit oppo don't get paid. It's all about the home run. So they get these swing doctors to teach them this from high school on. It's been going on for a generation and now you're seeing the results of that generation. https://t.co/sGPwXk3Wr0

Brandon Drury, ironically after I went back and forth on Twitter as to why nobody shortens their swing and goes the other way anymore, shortened his swing and went the other way to drive in our own ghost runner and win the game. Could there have been any other outcome on Mets Hall of Fame night? Well yeah, if Joey Votto had six more inches on his fly ball in the 8th. But as we go forward in the hopes that Javy Báez can go on a Yoenis Céspedes type run and carry this team to the playoffs, we are reminded once again about how this is truly a game of inches. And when those inches fall in our favor, it can be a beautiful game.

There’s a commercial for commemorative bats that SNY is playing now, offering special Mets themed bats that feature multiple players including … as the voice over guy said …

Can the copywriters do a little bit of research? A little bit???????