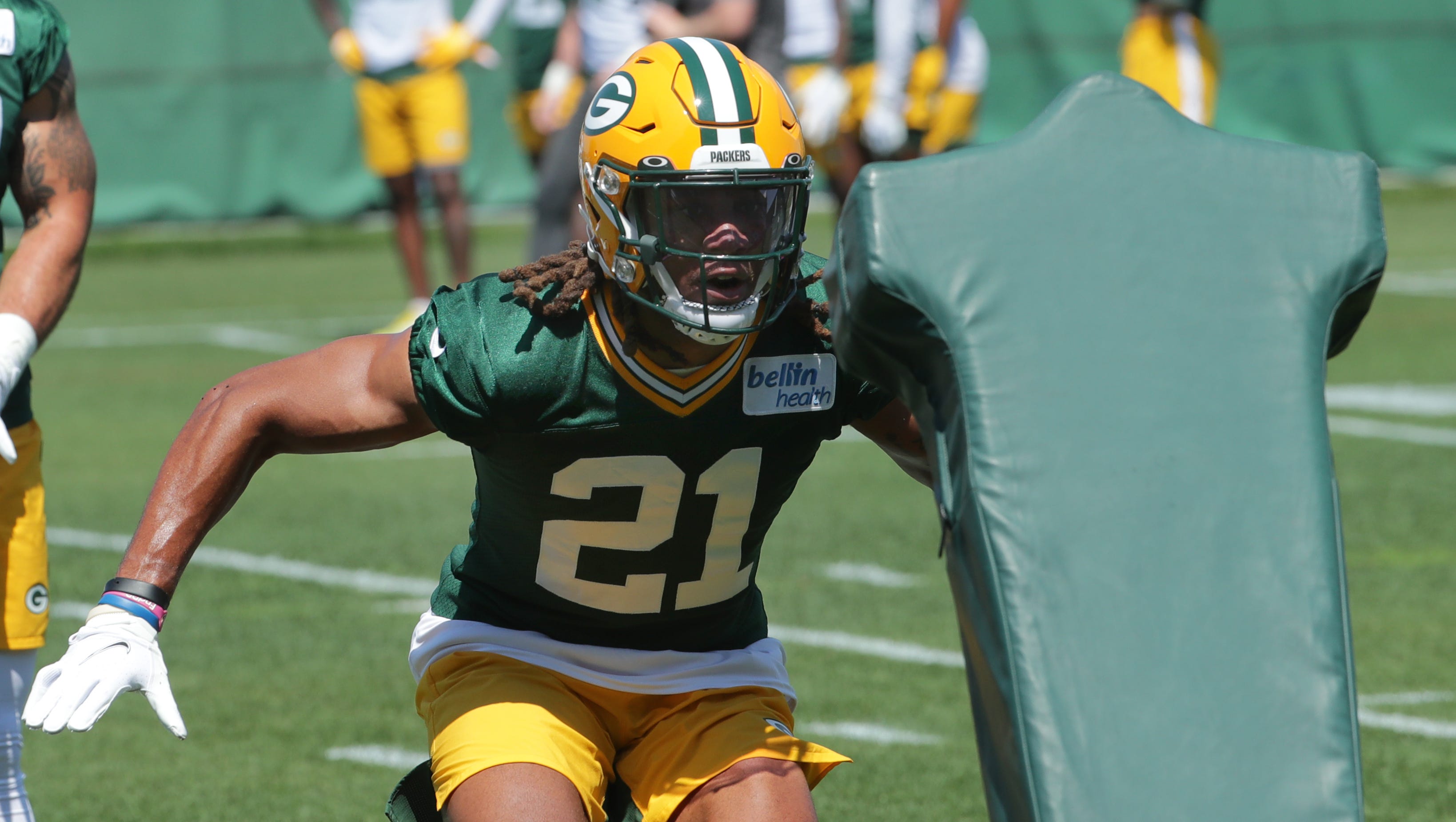 Packers 2021 first round draft pick Eric Stokes is now learning how to play in the NFL. The excitement of being drafted and the newness of OTAs has now given way to the hard work of training camp and going up against the best in the business day after day.

Specifically, for Stokes, that often means lining up opposite Davante Adams in practice every day. And that means getting schooled by one of the best receivers in the NFL today. Adams is a master at disguising his intentions at the line of scrimmage and gaining an advantage off defensive backs right off the snap of the ball. He and Aaron Rodgers have burned Stokes on several occasions during the first week of training camp.

But Stokes is taking it all in stride and using the situation as an opportunity to learn. “I just continue to ask questions like ‘What do you see here? What can I work on here?’ and just continue to not be scared to go up against him,” Stokes explained. “He’s the best wide receiver in the game so I’m trying to peek and learn everything I can so you can’t be scared to mess up.”

Head coach Matt LaFleur likes the attitude Stokes has brought to the table so far even though Adams has burned him several times in practice. “I think that’s going to be the case for most corners going against Davante and I just tried to reiterate to him that you’re going up against the best at their position in Aaron [Rodgers] and Davante [Adams] so there’s going to be some tough moments,” LaFleur told the media after Tuesday’s practice. “I think he’s got the right mentality and the right mindset to continually push to get better. He knows that when you go against the best, it’s only going to make you better so I think he’s got the right mindset for that.”

In addition to learning from going up against Adams, Stokes is learning from Jaire Alexander, another former first-round cornerback who has now developed into one of the top cover corners in the NFL.

“Jaire is always on my case, somehow, someway,” Stokes said with a grin on his face. “We could be in the weight room constantly. I could just get done doing something and he would say, ‘Get to work, rookie!’ I know for a fact he’s going to make me better, day in and day out. He’s coaching me up on the sideline. He’s a great person.”

That didn’t stop Alexander from demanding that the rookie buy snacks for the veteran defensive backs. Stokes went out and bought a week’s worth of candy bars and junk food for the room and it helped him get on Alexander’s good side.

One tradition Stokes has been enjoying is riding bicycles to and from practice. Unfortunately, because of the ongoing pandemic, he has not yet been able to ride with a local kid although he is looking forward to being able to do that.

The rookie has also enjoyed working with new defensive coordinator Joe Barry. “I love him. He’s a great coach and he’s always bringing the energy,” Stokes explained. “He’s going to keep it real with you, he’s not going to beat around the bush or anything.”

Stokes has enjoyed the comradery in the locker room and the way his teammates are all trying to help him improve his game. Even Aaron Rodgers gave him a message a few days ago in training camp. “He just said to me he’s going to make me better, day in and day out,” Stokes said. “And if I have any questions, just don’t hesitate to ask him because we all have one goal in mind.”

Right now, Stokes is just trying to enjoy the moment and adjust to life in the NFL. Despite mixed results on the practice field, he has kept a positive attitude. “Day by day, it just feels good. I’m pretty much living my dream. I want to be here, I always wanted to be here,” Stokes explained. “I can’t take a day for granted. When I wake up, I’m always smiling, I’m always ready to work. Even after practice, when I’m leaving, I’m constantly trying to learn something new. Just keep on learning and that will help get you to your next goal in life.”

For Stokes, the next goal is to become a great NFL cornerback. While there’s still a lot more work to be done, he’s already taken the first steps towards achieving it.