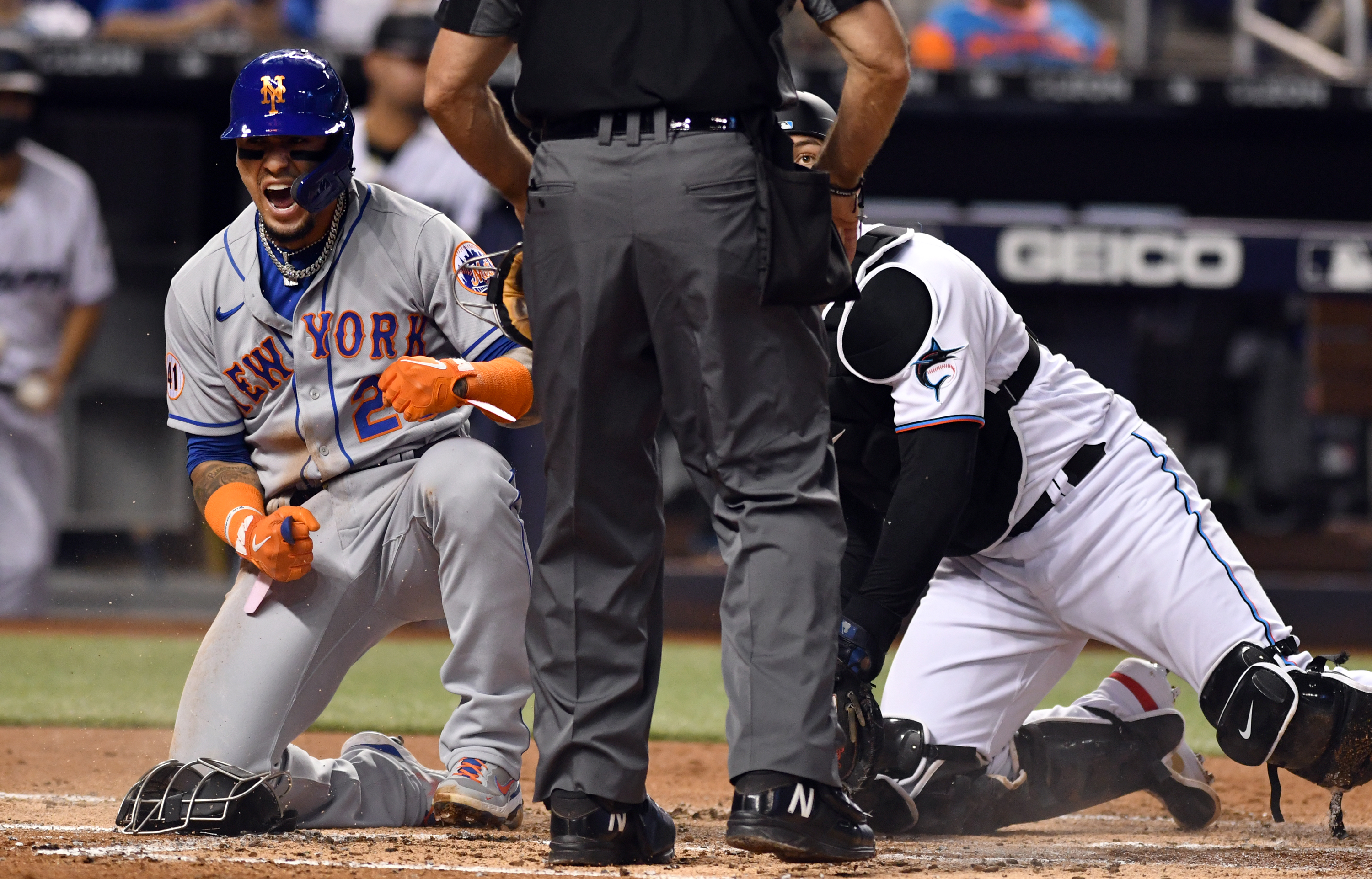 The day started with Luis Rojas gathering around and talking to his team “as a family“. Now I know that’s framed in love and support, but I’ve had those family talks too and it was nothing like that. So while it could have been a family talk like the Bradys used to have, but remember that the Mansons were a family too.

Whatever Rojas said, it sure has hell pulled the Mets together and caused the Marlins to make three errors to help the Mets to a much needed tourniquet … a 5-3 victory which kept the good guys a game and a half ahead of the Phillies, who also won. The Mets took a 3-0 lead in the second inning, and if the Mets go on to win the division, it will be the second run, a fielders choice by Tomas Nido, that will be replayed during every single subsequent rain delay until the end of time:

What a slide into home to score by Javy Baez. pic.twitter.com/FATLA1dHgQ

That’s the kind of smart baseball that Javy Báez is known for. But how in the world did Angel Hernandez not screw up that call?

The Mets gave it back, with Carlos Carrasco giving up two runs in the fifth before Jesus Aguilar hit one to the casino in Hollywood off Jeurys Familia to tie it up. Then in the 7th, the Mets loaded the bases after there were two outs and nobody out as Richard Bleier came into the game. The Mets obviously have a book on Bleier that says “ambush”. Brandon Nimmo swung at three sliders before singling to right field. Jeff McNeil doubled on a first pitch single, and then Pete Alonso was walked intentionally to load the bases. Dom Smith then continued the ambush by swinging at a first pitch slider, but he flew out harmlessly to center field. It was then I thought that the Mets appetite for sliders that aren’t little cheeseburgers was going to do them in … again.

But that would be exactly the reason the Mets would win this game. Báez swung at a slider on the outer edge … the same sort of slider that he was waving and missing at Monday night, and smacked it out to the opposite field in the 8th to give the Mets a 4-3 lead. I’m just going to have to face facts that Báez is going to swing at sliders on the outer half, and that there will be times that it’s successful so we’ll have to live with the misses. It’s not just hyperbole, the numbers back this up. 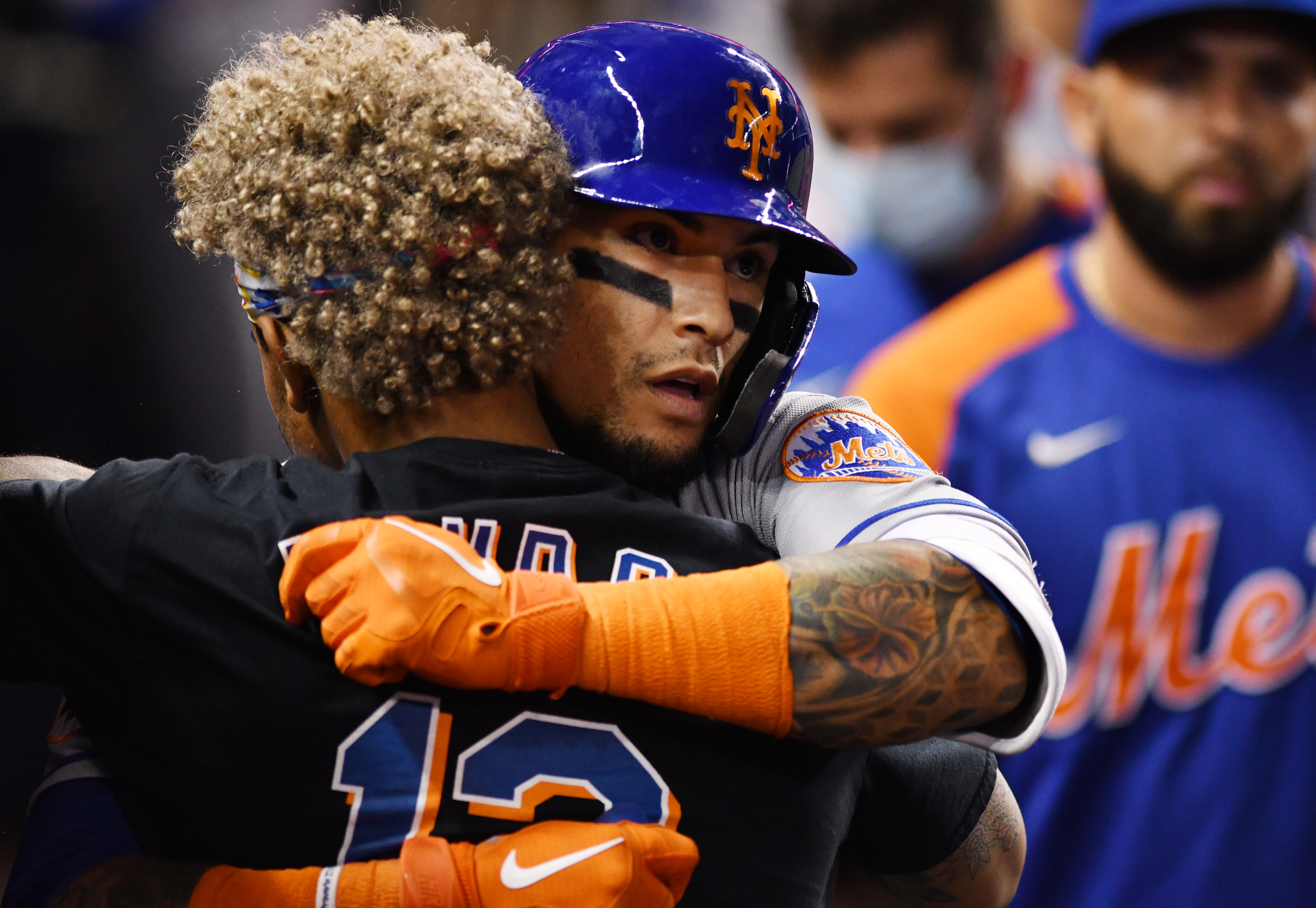 This is what I was going to bring up last night until I gut pissed off, but going into tonight, Báez is hitting 3.9 runs above average off the slider according to Fangraphs. Compare this to last season when he was at -3.6, and to the last full season of 2019 when he was -2.8. Also compare it to Smith’s numbers this season against the slider: -4/1 this season as opposed to 2.2 this year. For as much as this team drives me nuts being overanxious against off-speed stuff, Báez has had success this season so we’d do well to just enjoy the ride, even if it might come with a little nausea here and there.

The Mets scored an insurance run in the 8th on a passed ball to make it 5-3, and from there Drew Smith and Trevor May shut it down in place of Edwin Diaz, who was on paternity leave. Particular credit goes to Smith, who has been victimized with long balls lately, But he located well and threw hard against Aguilar, who he frustrated by getting him on a harmless ground out to shortstop.

The Mets are going to take the rest of the week, and the rest of the season, one game at a time as they should. But as far as I see from the outside, they could really use a five game winning streak right about now, with one more against the Marlins and three in Philadelphia. I don’t think the other team is going to make three errors a game, so it would behoove the Mets to be patient and hunt for fastballs. You could drop a “now or never” if you want, but never is still a long ways away. That leaves one choice.