If the Los Angeles Dodgers, or New York Yankees, or even the Houston Astros had the highest win total by mid-August in Major League Baseball everything would be very different right now.

Any one of those teams would be the lead on every MLB Network show, featured on ESPN’s baseball platforms, and celebrated throughout the national electronic sports media. With the addition of in-depth analyses, colorful player interviews, and splashy graphics and action replays.

But none of those powerhouse teams have the best record in the game as we approach the three-quarter mark of the 2021 MLB season. With 77 wins and 42 losses, it’s the surprising San Francisco Giants.

And the Giants are getting virtually no sustained or in-depth attention from the national sports media. It’s not just that San Francisco isn’t getting any love, they’re not even getting a friendly nod.

All due to a deadly combination of the following factors: the lack of impact or star players on the team; the minus .500 expectations the Giants had at the start of the 2021 season; and the disappointment that the expected lead story in baseball by now was supposed to be about the glitzy Dodgers (73-16), or the Padres (67-54), or the Yankees (66-52), or Houston (70-48). Or all four.

San Francisco has also gone about achieving the best record in the game in a methodical, tortoise vs. hare way. Here’s the team’s monthly games breakdown since Opening Day:

First, most baseball fans (including most Giant fans) and sports media pundits have spent the 2021 season waiting for the San Francisco Giants to regress to the expected third place finish that was tidied up and reserved for them with a mint on the pillow in the National League West.

The same pundits and fans were also waiting for the dominant LA Dodgers to go into their expected fifth gear and take the NL West title (which, and I hate to even bring this up, I think will eventually happen).

The point of no return in terms of taking the Giants seriously was rounded about a month ago. So here’s where we’re at now: if San Francisco plays .500 ball in the final 43 games of the season they will end up with a 99-63 record [add the sound of thousands of microphones being dropped around the nation].

And now the “why” of all the above. Three points.

First, while we love star power, flashy player stats and unending bat flips, there’s apparently a lot to respect about grabbing your paper bag lunch every day, taking the 8:10 train to work and punching out at quitting time. The workman-like quality of the Giants is that, at various times, all 27 players seem to be contributing something impactful toward winning baseball games.

You may not know their names or be able to pick them out of a line-up, but they’re out there getting it done.

A second factor is President of Baseball Operations Farhan Zaidi, General Manager Scott Harris, and Manager Gabe Kapler who have spent the past several years redesigning and upgrading all front office operations.

The result is an impressively smart top front office staff in perfect lock-step with each other and the players on the field.

Having top front office staff who aren’t burdened with an intrusive ownership group, who are dedicated to advanced analytics, and who understand that player development is the new cutting edge in the game is as much a part of the team’s 2021 success as anything else.

We used to think of “player development” as being strictly about the minor leagues, but teams like Tampa Bay, the Dodgers, and the Giants have brought a new dimension of player development to the 27-man roster.

Which lead us to the final point.

The San Francisco Giants have hit the baseball jackpot in picking up inexpensive cast-off pitchers from other organizations and turning their careers around. This is the result of creating (probably proprietary) “27-man roster” player development techniques and systems that have produced some amazing results. 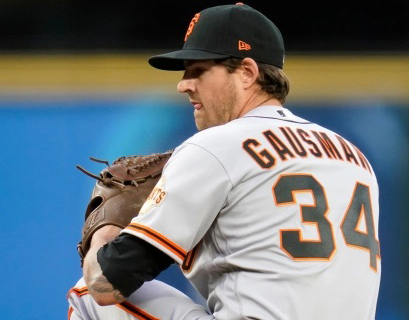 Next with the Atlanta Braves for two seasons he posted a 4.77 in 26 starts; dumped by the Braves, Cincinnati picked Gausman up and he had a 4.03 ERA in 15 games for them in 2019. And his career looked cooked.

To make one of these three scrap-heap player pick-ups pay off would have been a huge success for the Giants—to have all three excel is an extremely rare thing to see in the game.

To fully understand how the Giants got to where they are now, two other critically important bullpen pieces need to be mentioned.

The 2021 performance of this San Francisco Giants team is clearly the result of a full team effort, and a full front office effort. We may not see any classic superstar players when they take the field, but the results look just about the same.

Otis Redding wrote it. Aretha Franklin sang it. But so far the Giants aren’t getting much of it at all.