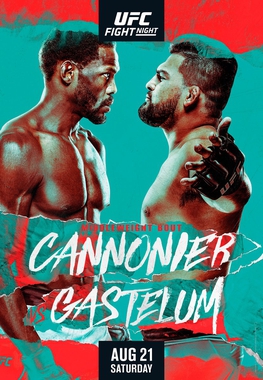 Like a lot of the guys at Fortis MMA, the real shining attribute to Brahimaj is his will and work rate. Brahimaj pushes forward, usually with plenty of takedown attempts sprinkled in, and gets right in his opponent’s face. While this style typically leads to really tired fighters who don’t have much in the tank for the later rounds, that simply isn’t the case with Brahimaj. His cardio holds up through all of these situations, typically even better than his opponents. This leads him to plenty of submission opportunities as they tire out.

In his UFC debut, Brahimaj was given a stiff test. He faced Max Griffin, who had been in the UFC for nearly five years. Even so, he was still only a +160 underdog (Odds by FanDuel). That speaks to how highly people thought of him out of the gate. However, that fight ended when a strike from Griffin nearly took Brahimaj’s left ear clear off. The referee wouldn’t let him continue (and for good reason). Now, a lot of people have forgotten how highly they thought of Brahimaj and simply remember the ear incident. It will take more than one big performance to change that narrative, but he certainly could erase a bit of it right here.

Sasha Palatnikov has had two fights in the UFC. The first was against a grinder in Louis Cosce. Cosce really took it to Palatnikov early on and had him in trouble. He got a bit overzealous and tired out, which ultimately led Palatnikov to a finish. In Palatnikov’s second fight, he faced Impa Kasanganay, who is more of a technical striker. Kasanganay showed off his new grappling chops though and somewhat easily finished Palatnikov with a rear-naked choke.

That grinding, grappling style is one that has worked against Palatnikov. Brahmaj should be able to implement it easily and get the early tap. Even if he doesn’t though, his cardio should carry him enough to dominate the positional battle here.