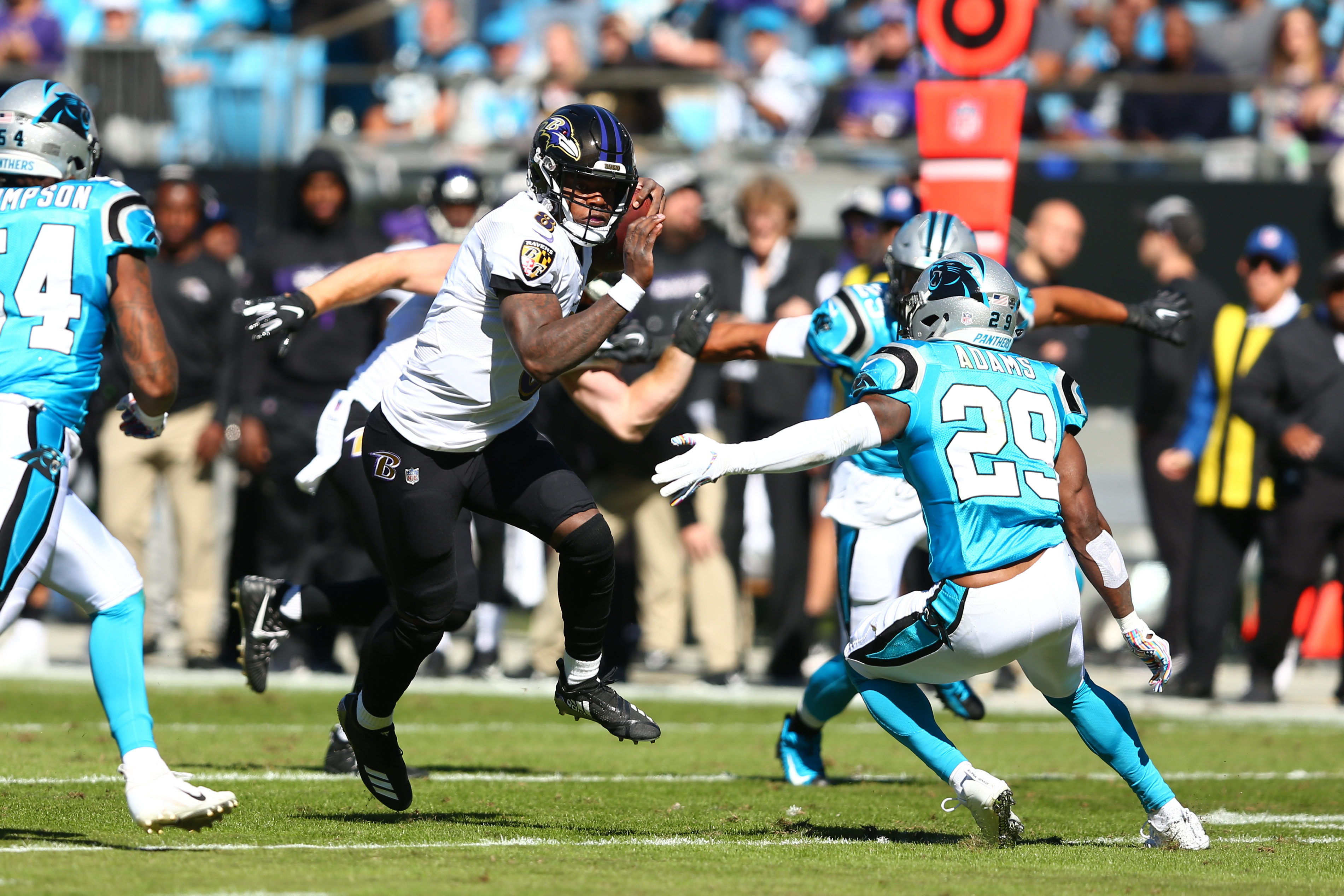 Huntley got his trial by fire off the to-do list…

With his boyhood friend Lamar Jackson watching on the sidelines, Tyler Huntley played almost the entire game Saturday night and led the Ravens to victory.

Engineering two touchdown drives in the second half, Huntley (24 for 34, 187 yards, one interception) recovered from a slow start as Baltimore captured its 19th consecutive preseason victory, 20-3, over the Carolina Panthers.

For the second straight week, Jackson did not play after participating in pregame warmups, and the Ravens’ preseason finale is next weekend against Washington. It remains to be seen if Jackson will see any action before the regular-season opener Sept. 13 against the Las Vegas Raiders. But Huntley received valuable reps and took another step toward being Jackson’s backup this year.

“Lamar, he wants to win every time he steps on the field,” Huntley said. “I’m right behind him. I want to follow in those footsteps. Whatever it takes for us to win, that’s what we’re going to do.”

Coach John Harbaugh was pleased with the work Jackson got during two joint practices against the Panthers this week, and the 24-year-old quarterback has thrown the ball well since missing the first 10 days of training camp (Reserve/COVID-19).

The decision to keep Jackson on the sideline was not a surprise, partly because he would not have been throwing to his top targets. Wide receivers Marquise “Hollywood” Brown, Sammy Watkins, Rashod Bateman, Miles Boykin and Deon Cain were out of the lineup, as was tight end Mark Andrews.

Brown and Boykin are recovering from hamstring injuries. Bateman will be out until at least September following groin surgery, and Andrews sat out Saturday after receiving medical attention for severe cramping at the end of Thursday’s joint practice.

Meanwhile, the starting offensive line got Kevin Zeitler back, but is still not intact. All-Pro left tackle Ronnie Stanley did not play Saturday although he participated in part of Thursday’s practice. Stanley is coming off season-ending ankle surgery and the Ravens want to avoid any setbacks prior to Week 1. The competition for the starting job at left guard still looks unsettled, as neither rookie Ben Cleveland or Tyre Phillips played on Saturday. Ben Powers started at left guard and played the first half before giving way to Foster Sarell in the second half.

With quarterback Trace McSorley expected to be out weeks with a back injury, Huntley took advantage of his opportunity and kept his poise after a rough start. His first pass of the game was deflected by defensive tackle Derrick Brown and intercepted by linebacker Haasan Reddick. But after missing on his first four attempts, Huntley made a 10-yard completion to tight end Josh Oliver for a first down, and from there Huntley took off.

Adversity doesn’t seem to rattle Huntley, which has impressed the coaching staff in his quest to be Jackson’s backup. The COVID-19 pandemic led to the preseason being cancelled in 2020, robbing Huntley of valuable experience as a rookie. But playing almost the entire game Saturday gave Huntley a chance to find a rhythm in game conditions. Huntley completed 15 of 16 passes during one stretch, and he also rushed for 23 yards on seven carries.

“We just continued our drives,” Huntley said. “I kind of knew I was going to play a lot. I haven’t really played a full game in a couple of years. It’s good that I got some quarters behind me. I didn’t even know I was 0-for-4. I just knew I needed to complete some passes.”

The Ravens aren’t showing opponents much offensive variety during preseason games, but that will change once the regular season begins. Running back Gus Edwards believes Jackson will be ready to roll, and Edwards liked what he saw from Baltimore’s passing attack during the joint practices.

“I think our passing game got a lot better during the week,” Edwards said. “I feel like Lamar had a lot of good connections with some of the receivers, and it seemed like they were on the same page this week.”

According to John Eisenberg:”If the Ravens wanted to see Huntley deal with adversity – an important part of being a No. 2 quarterback – they got their wish. His first pass was tipped and intercepted. His next three passes were incompletions. Midway through the first quarter, his helmet got knocked off as he fought to avoid being tackled for a safety. When he got untracked and led a long drive downfield with five straight completions, the threat ended when tight end Josh Oliver fumbled after a catch in the red zone. But the Ravens surely liked what they saw after Huntley survived the rough start and found his footing. He completed 14 of 15 pass attempts at one point and ended with a strong stat line – 24 of 34 for 187 yards. He moved the offense. He avoided mistakes. He used his legs to make plays. With Lamar Jackson in street clothes on the sideline, Huntley had a great opportunity to show what he could do against a starting defense. Huntley made the most of that opportunity.”

Although the Ravens’ starting safeties, DeShon Elliott and Chuck Clark, were solid performers a year ago, there was some thought during the offseason that the team would like to see more game-changing plays at the position. Well, Elliott and Clark both had huge moments in this game. The Panthers drove to the Ravens 1-yard-line on their first series, but on third-and-goal at the 1, Elliott and Patrick Queen met the Panthers’ Chuba Hubbard at the line and drove him back. On fourth down at the one, Elliott fought off a block and tackled Hubbard for a loss. On Carolina’s next series, Elliott registered a sack and Clark hammered a runner on third down to force a punt. The Ravens have a whole batch of talented, young safeties in camp, including Brandon Stephens, Geno Stone, Nigel Warrior and Ar’Darius Washington. But Elliott and Clark showed why they’re the starters Saturday night. “They’ve taken it to another level,” Harbaugh said.

We haven’t seen it much during training camp because of the limitations on padded practices and hitting, but the signature element of the Ravens’ offense – the power running game – made what amounted to a cameo appearance at the start of the game. Three of the offensive line’s five projected starters were on the field: guard Kevin Zeitler, tackle Alejandro Villanueva and center Bradley Bozeman. J.K. Dobbins ran for six yards on the Ravens’ first offensive snap. Then he gained three yards on second down. Then Gus Edwards took a handoff and blasted through the Carolina defense for 14 yards. It all felt oh-so familiar. An interception ended the drive, but Edwards had three more productive runs later in the first quarter. That was the end of the cameo from the first team, as substitutes took command of the huddle, but the power running game resurfaced in the second half with running backs Nate McCrary (64 yards) and Ty’Son Williams (47 yards) carrying the offense. The organization’s focus on improving the passing game has elbowed the running game into the shadows during the offseason, but if you were paying close attention Saturday night, you saw the Ravens send the message that they haven’t forgotten who they are.

Quick hits: Although his fumble in the red zone was costly, Oliver helped his bid to win a roster spot with a team-high seven receptions. He and Huntley exhibited nice chemistry on throws over the middle … Of the six receivers who caught passes, rookie Tylan Wallace made the biggest play with a catch that set up the Ravens’ first touchdown. Wallace almost caught a touchdown himself later but a pass from Huntley slipped through his hands … Warrior led the team with four solo tackles … Harbaugh on the lack of penalties and turnovers (after the two early ones): “That’s the way we try to play” … My vote for play of the game: Williams’ 20-yard touchdown run, on which he broke several tackles and somehow kept his balance long enough to get the ball over the goal line as he fell … Harbaugh didn’t sound optimistic after the game about linebacker L.J. Fort, who left the game with a knee injury. Although Malik Harrison seemingly has won the starting job next to Queen at inside linebacker, Fort is a leader amidst that young group and also is strong on special teams and in coverage. He would be missed.